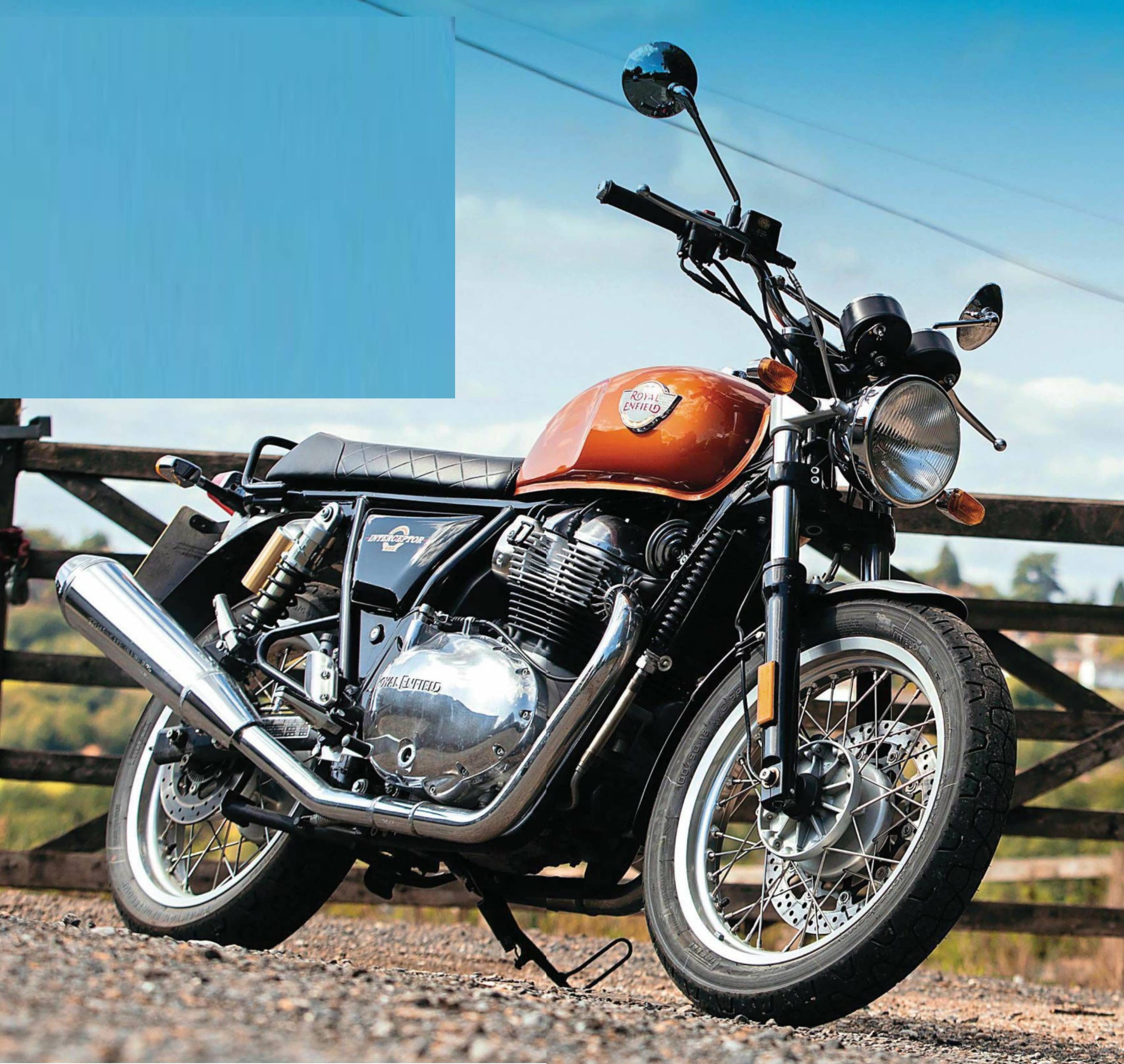 Royal Enfield's 650 twins have been a roaring success since they reached dealers in the spring of 2019. So how can a classically-styled machine appeal to such a wide range of riders? John Nutting rode one to find out

What's most exciting about the success of the new Royal Enfield 650 twins is that they are classically-styled machines in the truest sense, yet have been developed to the most up-to-date performance and design standards.

Even more remarkable is that they've been manufactured to specs that mean newbie A2 license holders can ride them, and at a selling price that almost defies logic. No wonder then that the bikes, offered in Interceptor and Continental GT versions, have been the UK's top sellers in the 125cc-650cc category since they reached dealers in March 2019.

At Classic Motorcycle Mechanics, whose focus is Japanese machines from the seventies to the noughties, there's recently been a broadening of the coverage that embraces modern bikes like the Yamaha XSR700 twin, Kawasaki W800 twin and the latest four-cylinder Suzuki Katana, all of which use classic styling based on a contemporary platform. Stretching the argument to include bikes like the latest Moto Guzzi V-twins and Triumph Bonneville 900cc and 1200cc parallel twins involved a measure of bartering with the editor, because the official line was that these were covered adequately elsewhere in the Mortons portfolio. But now the gates have been opened, as you see here, to the latest Royal Enfields.

Plenty has been written about the re-emergence of Royal Enfield, even long before the 650 twin was first revealed some years ago. How the factory in India — owned by the Eicher truck manufacturing group and buoyed by rising sales of its venerable Bullet-based OHV singles whose history goes back to the beginning of the 20th century — had decided to compete on a world stage with a machine offering wider appeal. And how it had invested in a high-tech UK technical centre at Bruntingthorpe near Leicester where it attracted the best design and development engineers. The result is a motorcycle that meets not just the latest regulatory requirements but — and it is this that makes it remarkable — looks like it could have fitted into many ranges of machines from the 1970s. It has a conventional duplex tubular frame with a sturdy telescopic fork and twin rear shocks. The fuel tank finished in a glossy lacquer, is a pear-drop shape with matching side-panels. The wheels have light-alloy rims with tension spokes. For the dyed-in-the-wool fan of bikes from the seventies (like me) the Interceptor 650 is a feast for the eyes, the sort of bike you would happily ogle in the garage or at the pub of an evening when people come up and remark: 'That's a lovely old bike. Had it long?' And you have to answer: It's brand new, and it's made in India.

And yet this is a bike that youngsters also find appealing: the sales figures - almost 1400 units shipped in the UK in the first eight months since the bike arrived in March 2019 - proved it. Perhaps its the simple balance of the design, or the unthreatening styling. What I find surprising is that this 650cc twin can be ridden by newcomers to motorcycling, probably with just a few months' experience, even though with 47bhp on tap and a top speed of about 110mph it offers the same performance as a 1960s Triumph 1120 Bonneville when it was one of the most potent road burners. The Royal Enfield 650 Interceptor is proof that provided the fundamentals are right - the engine and chassis - a machine doesn't need 'aggressive' styling or exotic electronics to appeal. 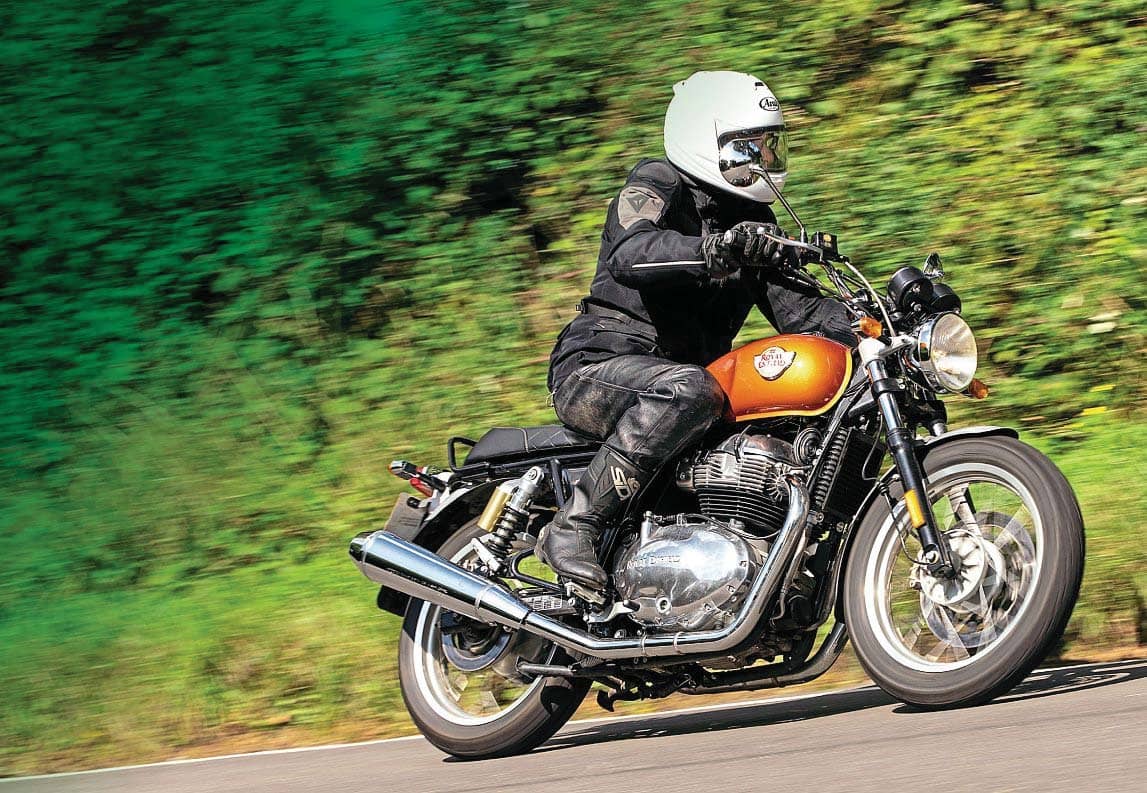 So what makes the 650cc Interceptor such a great machine? For a start it’s a manageable size, easy to push around and place on its center-stand. You can sit astride it with both feet flat on the ground. Switch it on with the key between the conventionally-styled instruments and the needles dance, indicating that there are some electronics at work. A warning light in the rev meter face shows that the disc brake ABS is operational.

Dab the starter button and the fuel-injected engine burbles into life with a happy chatter from the valve gear. This is a parallel twin in the traditional British style but now brought up to date with internals that are not far removed from Yamaha’s MT-07 twin, one of the UK’s most popular motorcycles. With a light clutch lever action and a silky bite as the drive takes up, the bike pulls away smoothly.