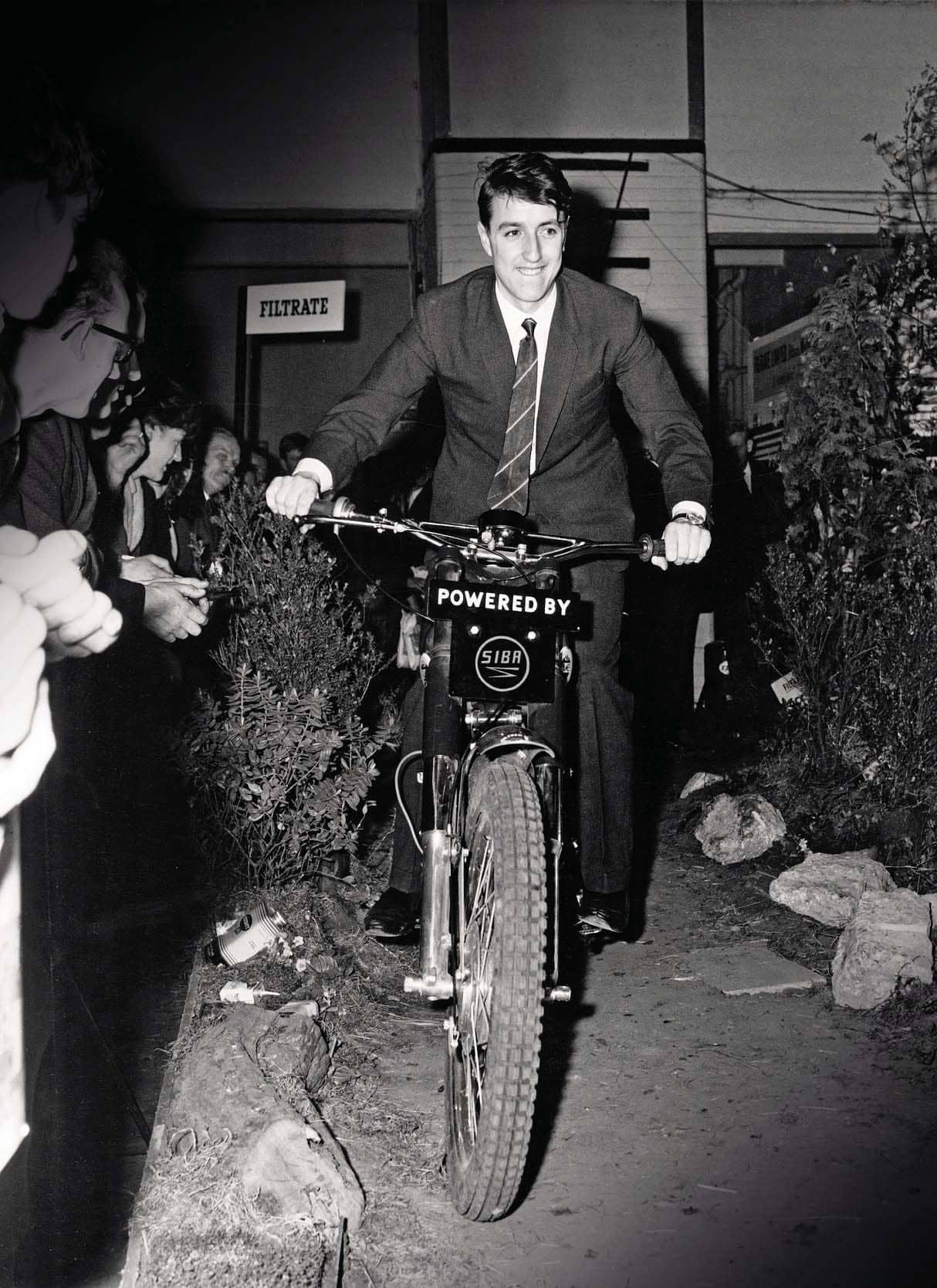 As the International Dirt Bike Show moves into a new phase, we take a look at dirt bike shows from the past.

The International Dirt Bike Show has a newhome this year. The popular annual off-roadevent will now take place at Stafford CountyShowground over the weekend of September 28/29, the new location offering more opportunity to develop the grass-roots action element of the show.

With changes afoot we thought it was an opportune time to take a look back at the way our scene was portrayed in the days when the UK had a thriving home industry and a manufacturer’s display always included the company’s off-road offering, especially when they had something to crow about.

The manufacturer’s marketing team would allude the road range were based on such sterling machines, the owner enjoying the experience of a motorcycle capable of winning prestigious events such as the ISDT and SSDT among others. 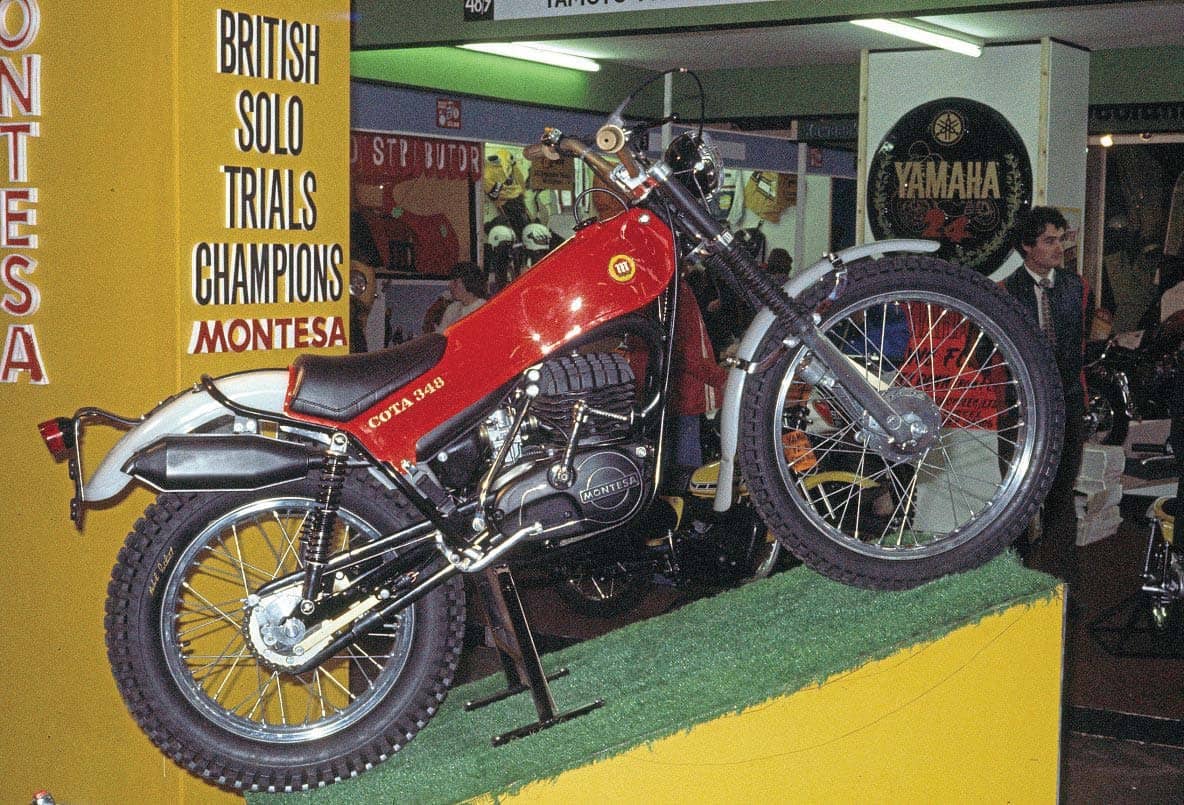 With the winning machines displayed still covered in dirt and just a little further back on the stand so the public couldn’t quite inspect them closely, it was easier for the manufacturer to allow people to think the road bikes were built to the same standards.

For whatever reason, the off-road bikes were part and parcel of the shows at Olympia in the very early days; Earls Court in the later years with a sprinkling of Brighton and Blackpool years before going to the NEC.

In those early years there were similarities between road and comp bikes so maybe this wasn’t such a bad thing, even if the similarity amounted to little more than the same style engine and name on the tank.

Technically one could buy competition mounts from all manufacturers, but having talked to factory riders from that era and chatted with photographer Don Morley – who did in-depth interviews for his classic off-road machines – the competition departments tended to be tolerated rather than promoted. Yes, the ability to promote the brand that wins in magazine adverts was nice and it did give stand staff something to open conversations with at the show but still… 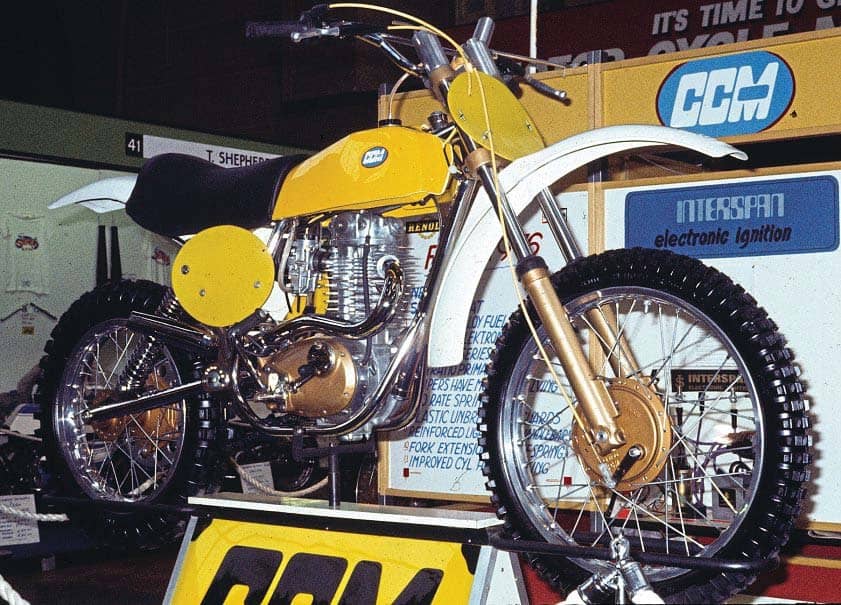 In those days the annual motorcycle show in the UK was a big thing and bikes would actually be launched there with all the pomp and grandeur befitting such a launch. These days, thanks to the internet, instant posting and the availability of cameras, bikes are rarely secret for long and ranges are often viewed way before any show.

In fact, it could be argued the traditional type of show has long since had its day and a public used to having its senses fulfilled will need much more than a few shiny bikes laid out in a row or grouped together. Certainly the motorcycle show of the Sixties and the first one I was at in the Seventies – Earls Court 1975 – had some attempt to change things.

While digging out photos of shows from our archive one popped up of a trials demo in the show hall. This early attempt to create movement and a new aspect to shows involved a wagon battery with a large starter motor to provide drive and built into the rolling chassis of whichever manufacturer was promoting the display. I seem to recall Filtrate Oils being a regular on this, with BSA, Francis-Barnett and maybe James creating machines to be used not just by trials stars such as Gordon Adsett pictured on page 27. Showgoers could queue and pay an amount to charity and have a go on the trials course too. Given battery technology of the day the demo section wasn’t a long one, unlike the queues of people wanting a go. It wouldn’t be difficult to set up a proper course these days and use the electric bikes which are now competing on almost equal terms with petrol machines. 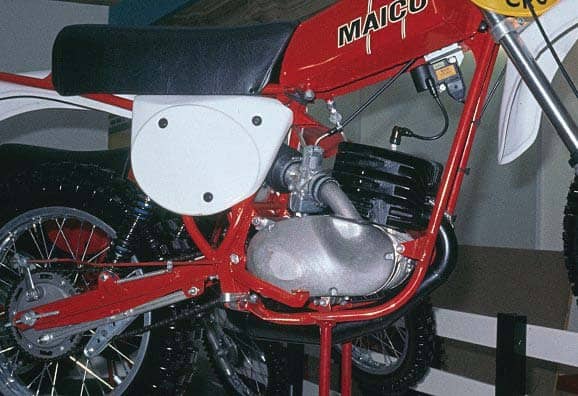