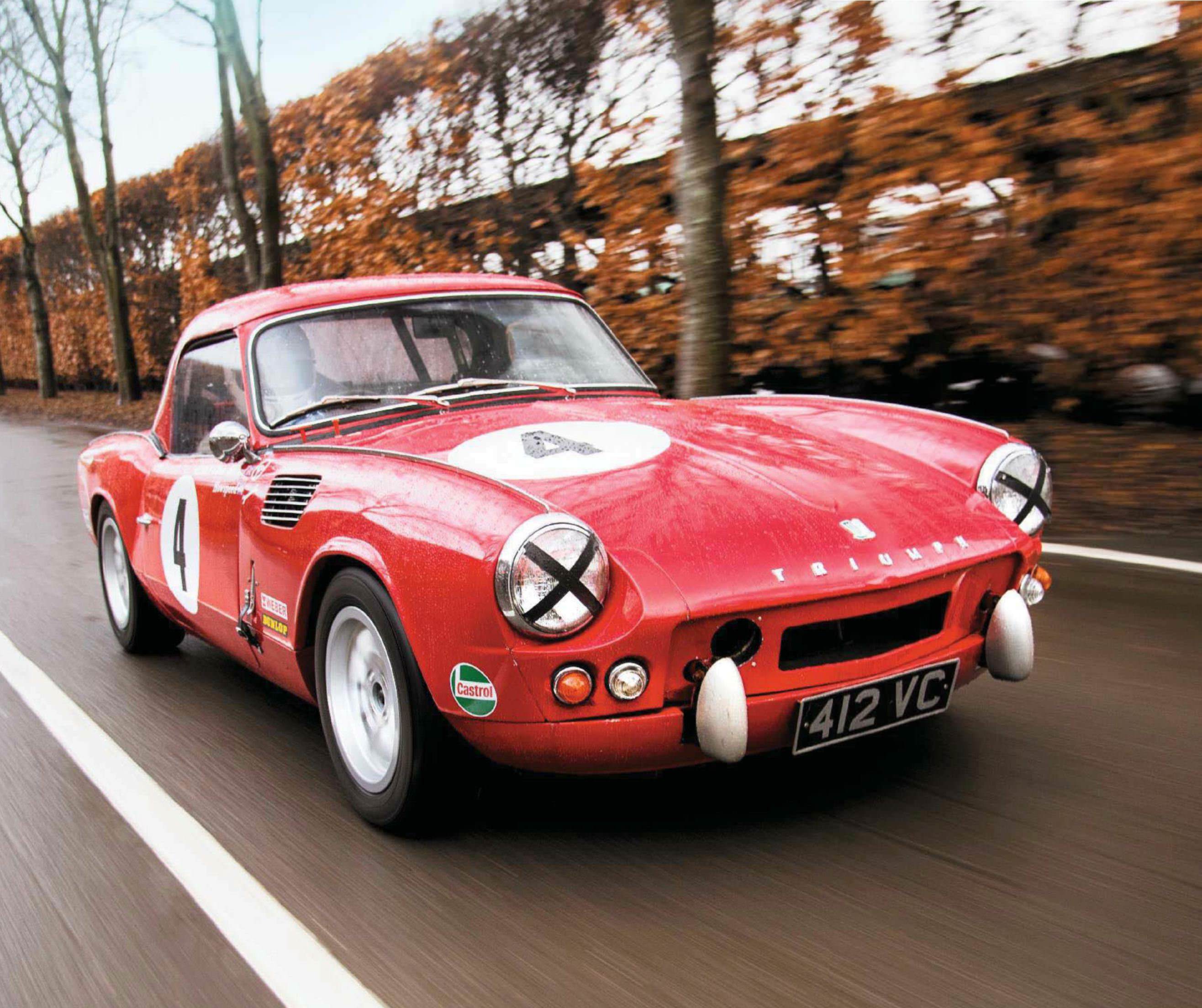 The little red sports car – it’s an automotive archetype. And even though we should know better, it makes us want to do rakish and impetuous things – like whistling while walking with our hands in our pockets, driving to the seaside without a scarf or going round a roundabout twice. When the Triumph Spitfire hit the showrooms in 1962 it must have stirred even wilder fantasies in the men and boys looking in through the glass. After the stubby Sprite and Midget its lines were more beguiling, more feminine, as noted by Ronald Barker in Autocar on testing the first example.

Talking of first examples, this car is one of two pre-production prototypes hand-built by Triumph. It was the car used for all the press and advertising photography both on this side of the Atlantic and, in left hand-drive form, in the US. Later, in more purposeful, stripped-down guise and with a hardtop, it became one of Triumph’s first competition Spitfires. Hence its appearance today.

But even in track-prepared trim the original lines are very much in evidence. And though Triumph connoisseurs might grit their teeth, I have to say that a Spitfire – even a fierce Spitfire – possesses qualities of almost unfeasible cuteness. The way the rear wings flick up to those dainty indicators, that waistline crease behind the front door to the rear haunch, the slightly pouting mouth and yet more scoops and curves in the front wings. It’s nowhere near as voluptuous or musclebound as, say, a Cobra 427. It’s more restrained and, well, pretty.

Some OSCAs have the same quality, but since the Italian cars’ racing careers are more visible they have perhaps made people more conscious of their underlying potency rather than first thinking, ‘I wonder if Marc Bolan had one?’

It’s no help that my strongest recollections of the Spitfire are from the model’s later days, when we were tired of BL’s shortcomings in fit, finish and performance. The Spitfire of my late teens was a bit naff, a bit weedy. Too many people called Barry in bobble-hats drove them.

But this Spitfire remedies all that at a stroke – or rather four strokes as the suck-squeeze-bang-blow sequence fires loud, sharp and, at first, pretty uneven. The car known as 412 VC hasn’t been out for a while and is spitting and complaining that it needs a good fettling. But it’s also how I’ve always wanted small, curvy sports cars to sound – potent, cross and gritty.