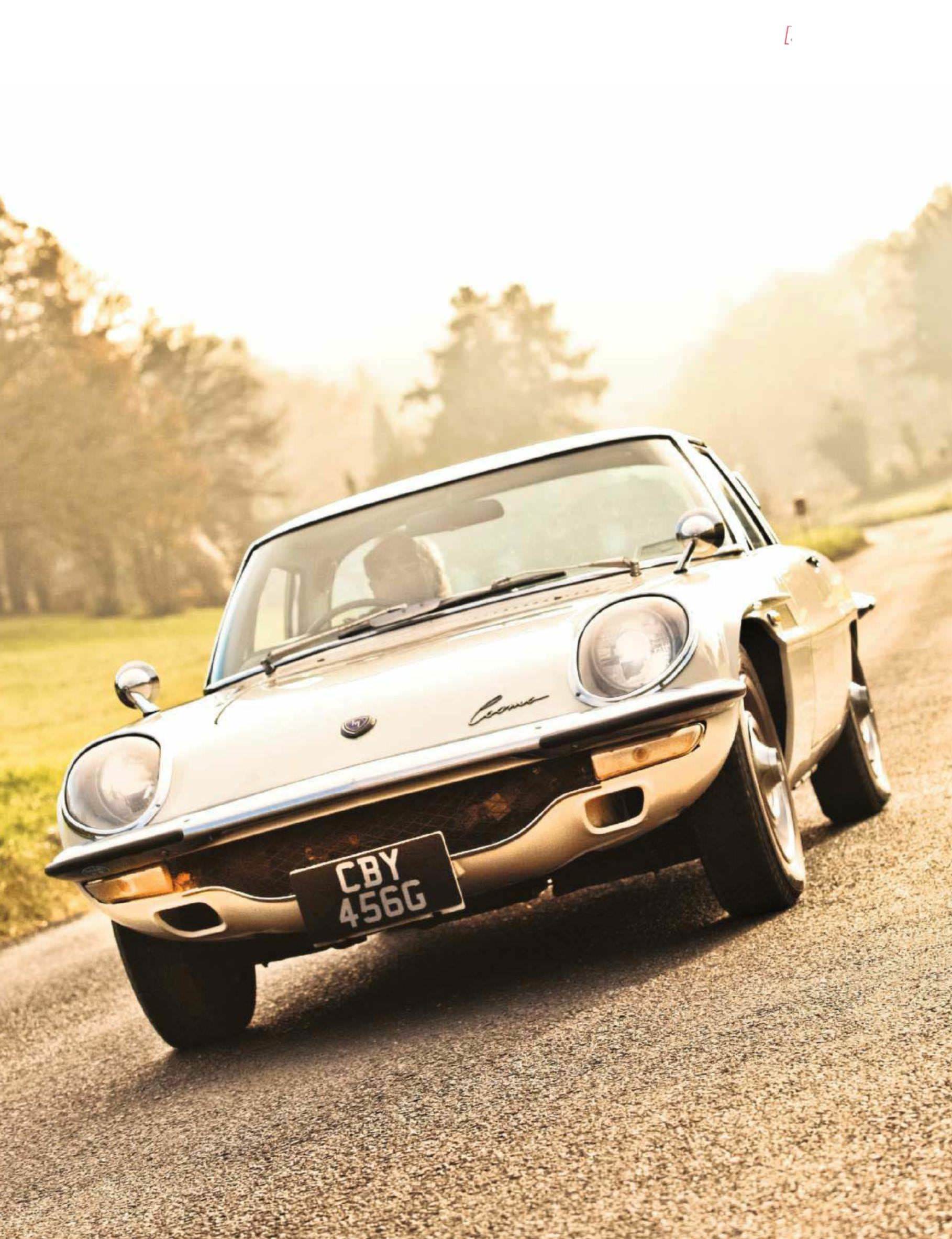 In a brave new era for the Japanese car industry, the Mazda Cosmo infused Euro-American styling with pioneering rotary power. Almost 50 years on, we take this rare UK example for a spin.

This 1969 Mazda Cosmo Series 2 has a strangely attractive shape. In profile it’s almost a semi-scale first-generation Ford Thunderbird. In fact, the vast wraparound rear window and the bumper-bracketing rear lights wouldn’t look out of place in the Eagle on Dan Dare’s spacecraft Anastasia. I’ve come over all ‘Thunderbirds Are Go’ just looking at it. I have to force myself to stop prancing about like a marionette on speed and prepare to board. It may not be the most beautiful Sixties car but its design is most intriguing.

The interior is rather compact and narrow but well appointed. My eye is instantly drawn to the aluminium kickplate on the leading edge of the doorcards, and the stitching of the interior trim. The double stitching around the main instrument binnacle in particular is so well finished that it looks rather more Aston Martin than Mazda. The seats appear to be fully trimmed in hide but are in fact just high-quality vinyl (an option over regular fabric); overall the car exudes an impression of being a very well put-together product. The wood-rimmed steering wheel has three drilled aluminium spokes and is mounted so that it is almost perfectly vertical. If you want to play Sixties F1 racer with completely straight arms, this is the car for you.

Curiously, I note a footrest on the left-hand side of the transmission tunnel, a mirror image of the one placed next to the clutch pedal on the driver’s side. What use that would be, even on a left-hand-drive car – which the Cosmo never became – is beyond me. Also of interest are the door locking pins, which are sensibly and ergonomically positioned just aft of the opening quarterlight so I don’t need to reach awkwardly behind my shoulder as is the norm in most cars.

I note the original radio is still in place and there is a period Pioneer cassette player under the glovebox, but to my dismay I find a previous owner has fitted Clarion speakers on the back shelf. To the right of the rather capacious glovebox, which is adorned with an oversized Cosmo logo, sits a passenger grab handle; the 250kph (155mph) speedometer suggests they may need it, but is clearly optimistic.

The other main dial is the rev counter that is calibrated to 9000rpm, with the 6500-7000rpm yellow zone and 7000-9000rpm red zone providing the dashboard’s only flourish of colour. Minor gauges are distributed in a row either side of the main displays. Below, the aluminium plaque that shows the five-speed shift pattern layout gives me a sense of reassurance; the Japanese script on the switch bank below the left of the steering column does not. Hoping it doesn’t offer a crucial explanation of some obscure Japanese operational quirk, I twist the key. The twin-rotor Wankel rotary unit that sits low up front starts easily and soon settles to a 730rpm tick-over; initially it doesn’t feel as smooth as an inline engine and there is a slight rocking motion, but a blip of the throttle serves as an instant remedy.