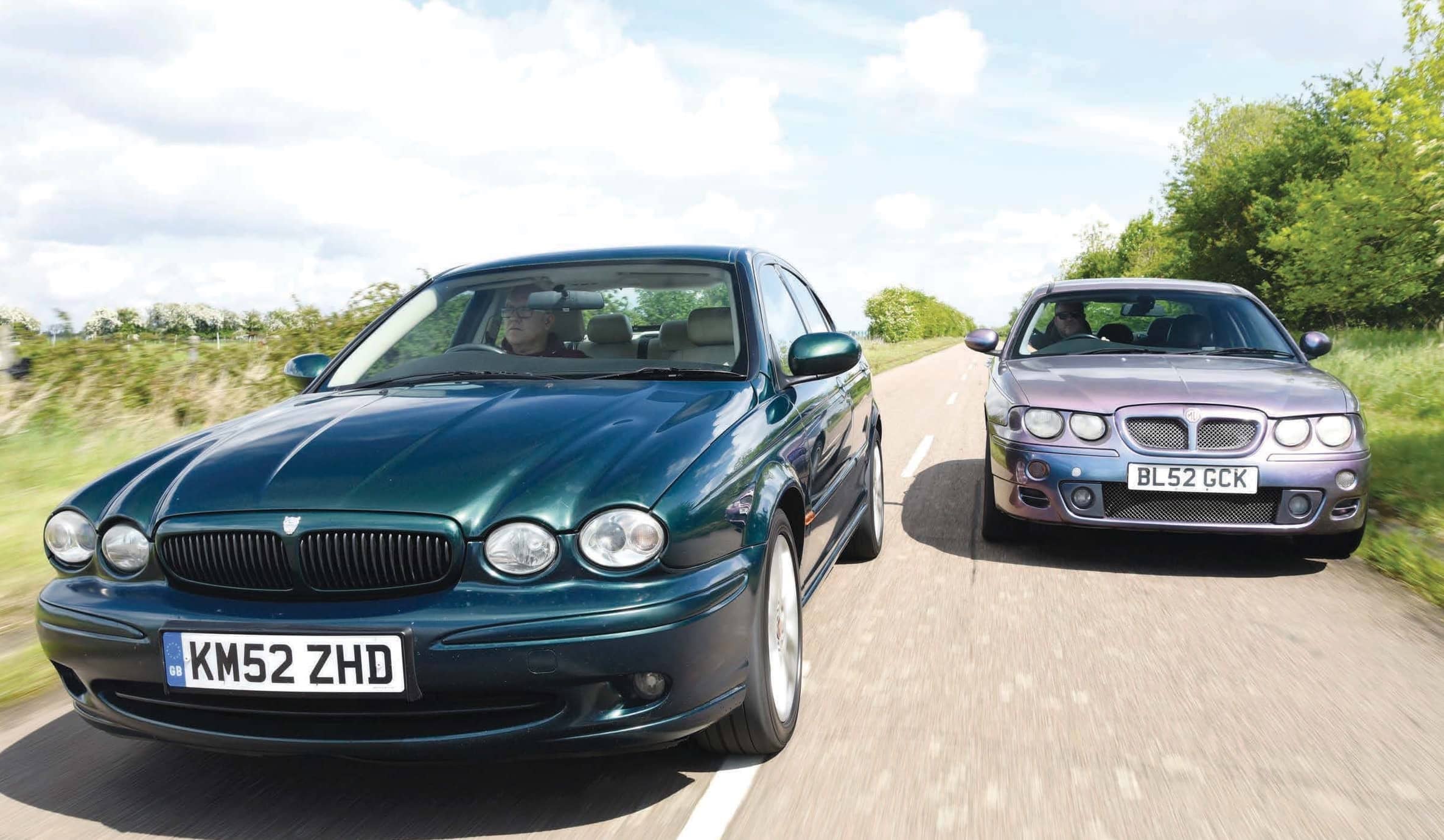 Two British-made modern classics which made credible sporting saloons despite their unlikely origins.

Craig Cheetham
For years, the Germans dominated the compact sports saloon market, but in 2001 there were two brand new contenders, both from iconic British brands.

In the green corner was Jaguar, with its all-new X-Type. Developed from shared Ford technology and using some of the architecture from the Mondeo, the new baby Jaguar was the marque’s attempt to muscle in on the marketplace dominated by the BMW 3-Series, Audi A4 and Mercedes C-Class.

It made its debut in January 2001 and was initially available in V6 petrol form only, equipped with four-wheel-drive. It was criticised by some purists for lacking Jaguar’s traditional quintessence, while there were others who bemoaned the fact it was based on the Mondeo. In reality, though, it was far less Mondeo-based than many believed – the front subframe, floorpan, suspension and brakes were the same, the rear end was derived from the advanced multi-link set-up from the Mondeo estate and it used Ford’s chain-driven V6 engines. But the rest was unique. Indeed, had Jaguar been more upfront about how much Mondeo was in the X-Type at launch, there’d have been less speculation.

Besides, the Mk3 Mondeo was one of the finest handling family cars of its era, so the heritage was nothing to be ashamed of.

In the red corner, meanwhile, was MG. A brand revitalised after Rover’s divorce from BMW. Under the new MG Rover company, there was a huge shift in marketing, moving away from the mature and refined values of Rover toward an altogether more mischievous image portrayed by MG. The famous octagon had been absent from the saloon car market since the demise of the MG Montego in 1990, but the new ‘Z’ cars, launched in March 2001, marked a return to sports saloons and this time without a red seatbelt in sight.

The flagship MG was the ZT, based on the Rover 75. It wasn’t the obvious candidate for a sports saloon – after all, the 75 was all about refinement and luxury. It was a fine car, possibly Rover’s best-ever, but it was engineered with comfort over performance. MG Rover’s chassis engineers knew what they were doing though, and despite the outward similarity, the ZT was a very different car to the 75 in terms of its dynamic appeal. It was much firmer, with sharper steering and a short-throw gearbox that completely altered its character. It was the Mr Hyde to Rover’s Dr Jekyll. A pure-bred sports saloon.

The ZT and X-Type Sport were obvious rivals. Jaguar offered the Sport in 2.1, 2.5 and 3-litre V6 guise, with a diesel coming later. Meanwhile the 75 was initially offered as a 2.5-litre V6 or 2-litre diesel, with 1.8 petrol and 1.8 turbo models following on.

In 2.5-litre guises the pairing were so close on paper that they made an obvious comparison, with the same list price when new and just 6bhp separating their power outputs. The MG is front-wheel-drive while the Jaguar uses a viscous coupled driven all-wheel-drive system with a 60% rear drive bias. Both were drivers’ cars, but with a helpful dose of practicality thrown in. Indeed, you could even get an estate version of each, the MG from 2002 and the Jaguar from 2004. But which is the best of these British bruisers today?

The Sport was the variant which Jaguar chose to launch the X-Type in a move to attract new, younger buyers to the marque. It followed it up with the SE, which was a far more traditional car with fluted leather trim and a chrome radiator grille.