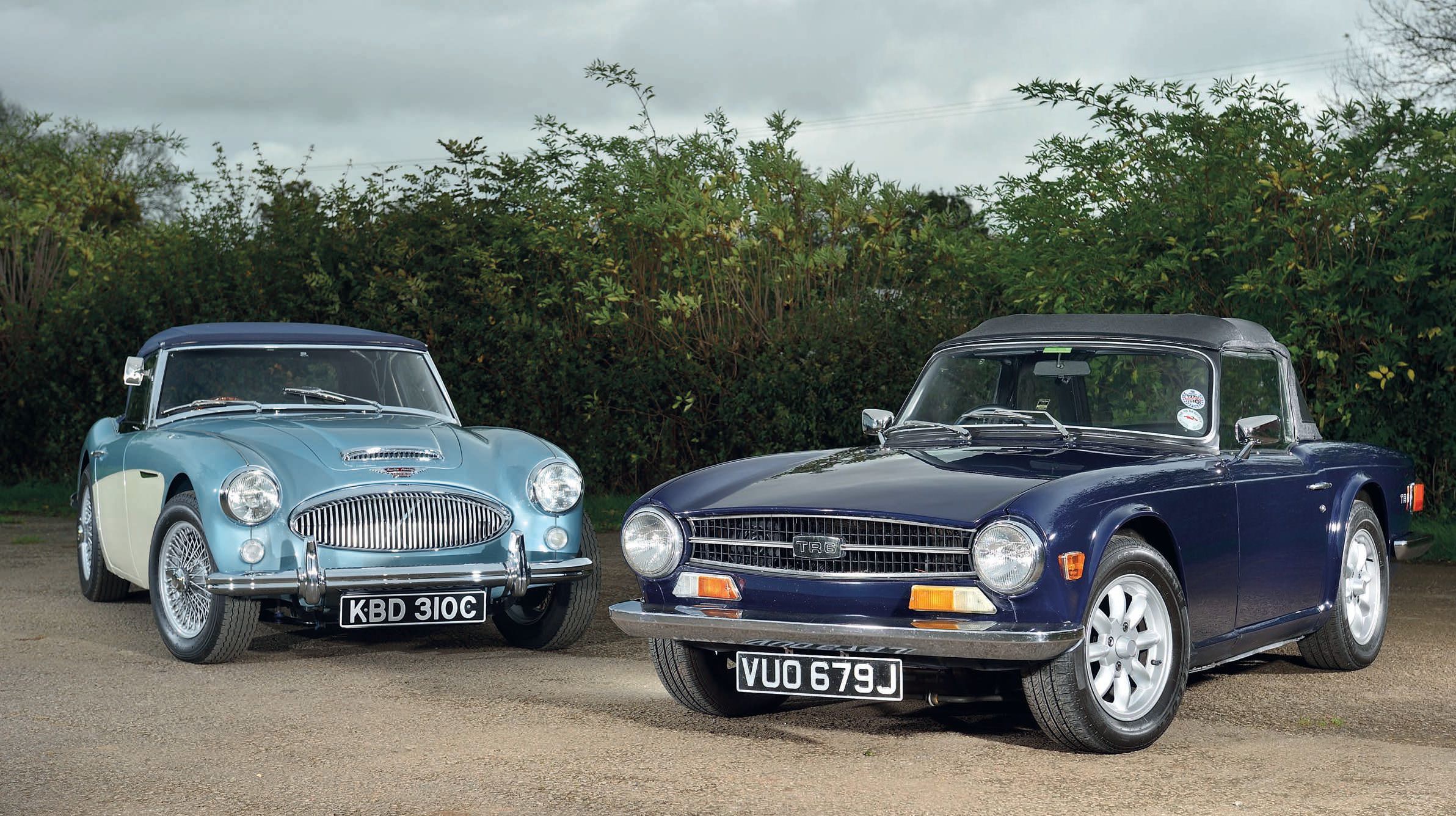 The TR6 and Big Healey typify the no-nonsense traditional British sports car but which is the winner as a classic?

When Donald Healey chose to fit a six-pot motor into his four cylinder Austin Healey 100/4 chassis then follow up by enlarging it to a full three litres, he had a winner. The Austin Healey 3000 was the undisputed king of the big British sports cars for most of the Sixties. The recipe was simple: glamourous drop-top styling, sufficient space inside for two, with a beefy straight six cylinder power unit up front driving through the rear wheels.

With their ‘Put your foot down – and live’ advertising strapline, Austin Healey were selling performance and lifestyle for the Swinging Sixties, and the firm did so very effectively, backed up by some notable rallying accomplishments. But no market leader is immortal and by 1967 the king of the Brits’ styling was dated and production was becoming uneconomic. In December of that year, after a run of eight years, the Austin Healey 3000’s reign was over.

The king may have left the stage but the big front engine, rear-wheel drive sports car formula remained popular and relevant. MG tried the recipe with their short-lived six pot MGC and Triumph’s TR5 also briefly challenged for the crown. However, it wasn’t until Triumph launched the TR6 in 1969 that we had another serious contender as ‘king of the big Brits’.

Triumph offered the same formula of six cylinder brawn powering the rear wheels, in a two seater convertible body shape that seemed bang up to date at the dawn of the Seventies. A seven year production run with huge trans-Atlantic sales suggests the TR6 may well have assumed the Healey’s crown. Fifty years later, we compare the two. Which one is the true king of the big British sports cars, and which offers the best classic car ownership experience today?

Right from its launch as the four cylinder 100/4 in 1953, the Big Healey carved a huge presence in the British sports car market. Born out of Britain’s ‘export or die’ manufacturing strategy following the Second World War, Leonard Lord at Austin seized on Donald Healey’s two-seater prototype as the opportunity for his organisation to grab a large slice of the lucrative American sports car pie.

Together, Austin and Healey continuously developed the rather basic early model throughout its lifespan, adding a 2.6-litre six cylinder motor in 1956 and ultimately a full three litre engine from 1959, creating the Austin Healey 3000 which is our contender today. Along the way, creature comforts improved with better seats and wind up windows, extra chrome was added and safety was improved with disc brakes. The Austin Healey 3000 was finally dropped from production in 1967, after almost 43,000 examples had been built. Over 90% of production was exported to the United States, still providing a large pool of cars to this day, with many returning across the Atlantic to become restoration projects for new owners.