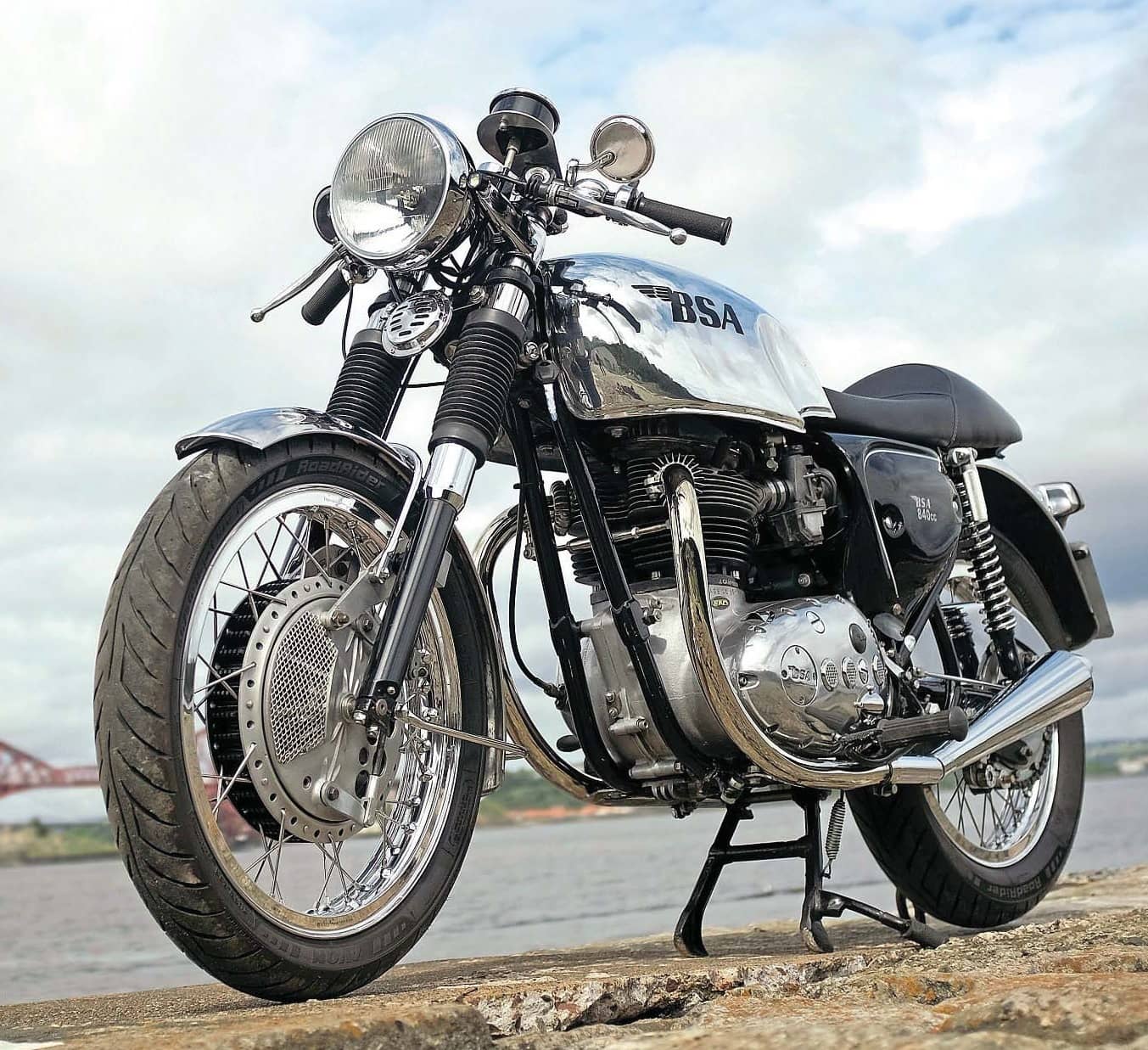 Jim Lightning (for want of a more appropriate surname) could act as a stand-in for late Quo frontman Rick Parfitt, such is his likeness to the famous rock guitarist. But what rocks Jim’s silver locks these days are Small Heath unit twins; and the BSA Lightning to be more specific. This wasn’t always the case however, as Jim has owned umpteen BSA, Norton, and Triton motorcycles, and recently he restored a prize-winningVelocette Venom, as well as a trophy-accruing Norton ES2. 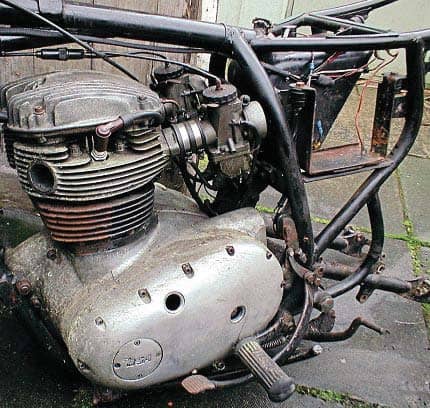 The stunning silver and black ‘Lightning’ seen hereabouts was restored from the ground up by ace mechanic Jim and restyled by his ‘show queen’ wife Liz, who shares Jim’s passion for all things glitter and chrome. However, this BSA is no trailer queen – despite its impressive haul of silverware, which Jim freely admits is credited to his wife’s design input. It’s actually a café racer that gets plenty of use, whether on trips to far-flungVMCC events or on back road burns to Jim’s favourite haunt,The Biker’s Cove in South Queensferry.

The bike once belonged to a family friend who stripped it with the intention of restoring it. However, the A65 ended up in boxes, accumulating rust and cobwebs in a farm shed over several years – hard to believe when we see it now!

Jim and Liz bought the bike around nine years ago and rebuilt it as a BSA (SRM) X65 look-alike, based on CraigVetter’s BSA Rocket 3 concept of 1969 (later rebranded as theTriumph Hurricane when a troubled BSA closed its doors). But Liz decided the X65’s minute petrol tank and Seventies styling was no longer her cup of tea. So the dynamic duo spent another three months rebuilding it from scratch, with genericTriton styling as an influencing factor... 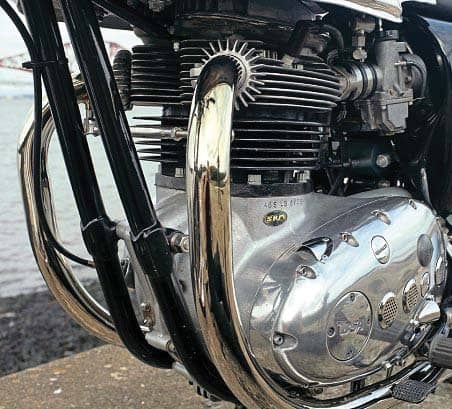 To the team’s credit they came up with one superlative café racer that boasted an impressive and salivating spec sheet. Central to the new look was a polished Spitfire (type) alloy petrol tank, complete with modern centrally-positioned fuel cap, specially commissioned by creative guru Liz. Other distinguishing features are the bespoke café racer-style seat, Dunlop flanged alloy rims and a genuine late Fifties 4LS Robinson front brake (identified by 40 spokes according to Liz – modern copies have only 36). 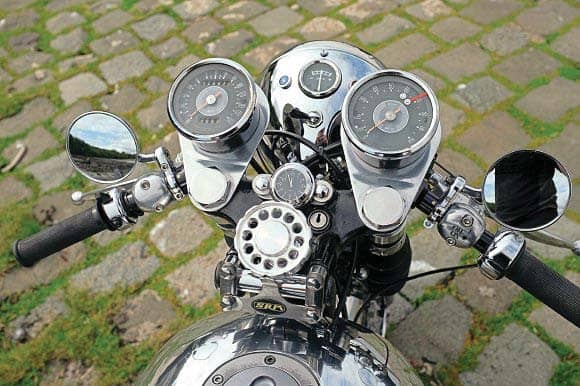 I was amazed to learn that the BSA unit-construction engine has had a change of heart – namely a lightened and polished (alternator) A10 dynamically-balanced crankshaft that benefits from SRM’s renowned needle roller bearing and oil feed quill conversion – so quite a crank-full! Also present is a modern SRM barrel, resulting in a whopping 840cc to play with – hence this unique BSA’s 840cc side panel transfers.Top spec Omega op111 H/C BSA B44 type pistons are also fitted andmounted to steel cap racing con rods, the bore and stroke being 79.5 x 84mm (approx).

The high-spec continues: A gas-flowed cylinder head, polished and ported to within an inch of its life, 34mm inlets with SRM big inlet 43.5mm valves cosseted by Colsibro valve guides and lead-free compatible valve seats.The cylinder head also sports highly polished rockers and has an identical combustion chamber profile and piston crown as aV12 Jaguar. Much of the early head work was by SRM but all the later work was carried out by Jim and an auto-engineer friend.Twin Amal Mk2 34mm carburettors complete the remarkable top end.

The unit gearbox now houses a close-ratio gear cluster that Jim removed from another Beeza more than 30 years ago.Also fitted is a larger 23-tooth gear sprocket for improved top end power and a cleverly engineered drive chain tensioner in the interests of low maintenance, but long chain life.

An excellent competition Bob Newby clutch with belt drive and three ball actuator joined the list of expensive upgrades. Creative Liz came up with the eye-catching primary cover’s triple perforated air vents and clutch cooling air scoops (ingenious use of bathroom accessories I’ll wager), and the BSA rubber bung is perfectly positioned to allow easy adjustment of the inner six spring clutch screws without having to remove the outer casing.