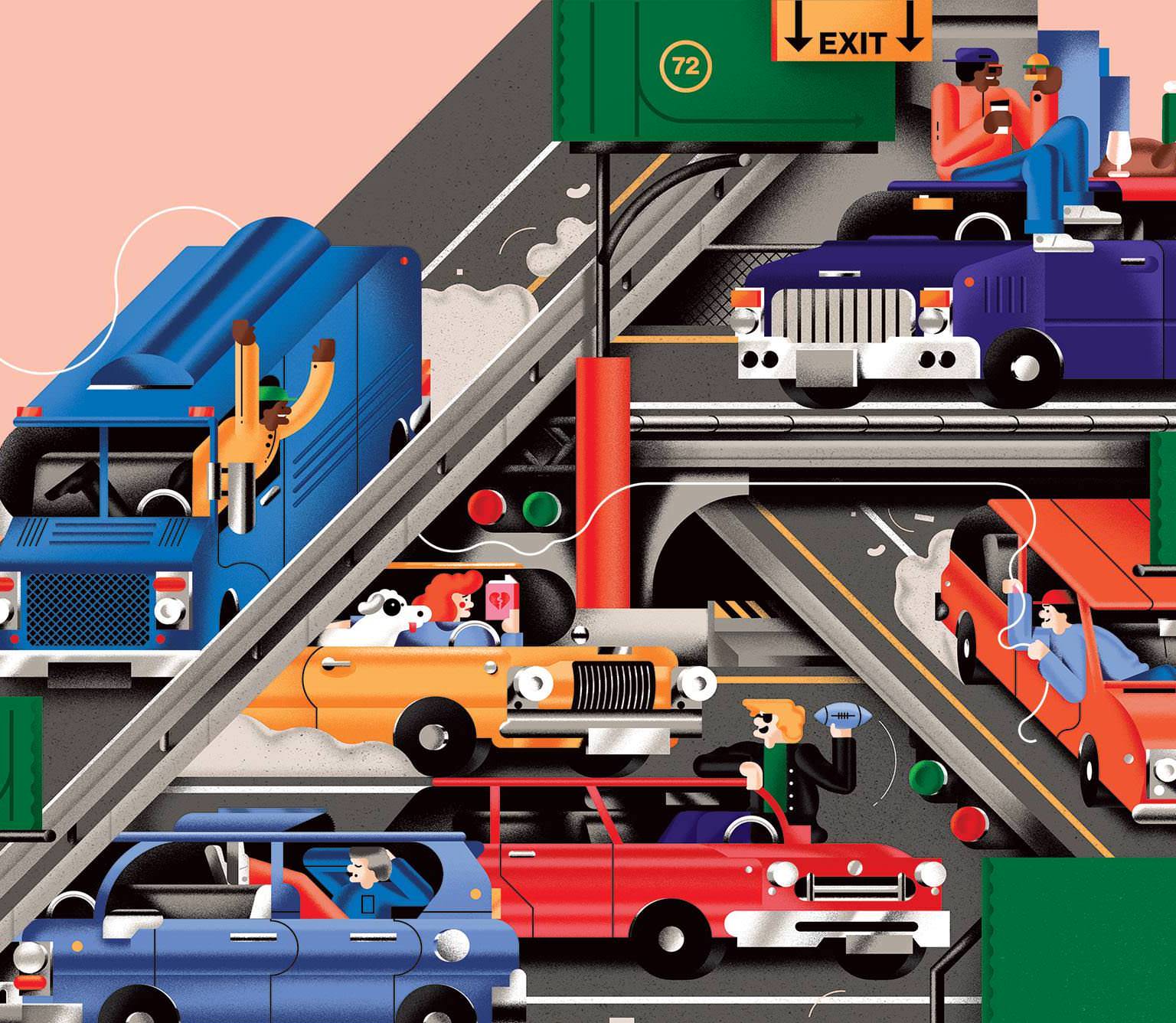 Even General Motors thinks the age of autonomous cars is inevitable.

"I like to drive cars," says Mark Reuss, product development chief at General Motors, "So this is a little funny."

Not funny-ha-ha, he clarifies, but funny-odd. He’s sitting in the driver’s seat, with his hands on his thighs and his feet on the floor of a big Cadillac that’s driving itself around a banked oval.

Reuss is at GM’s 4,000-acre proving ground in rural Michigan, hidden from the public behind locked gates, tall trees, and security befitting a prison. The company’s been debugging its cars here since 1924. It’s a brilliant, sunny autumn afternoon—a nice day for being driven. Dozens of tests are going on, though it appears that his is the only one where no one’s holding the wheel.

Reuss is on edge. He forces a nervous laugh as the car takes itself up to 70 miles per hour. If he has any fast-twitch impulses rocketing across the synapses of his brain— Take the wheel, damn it!—he doesn’t give in.

Cadillac, which was two decades old when flappers were saying things like “the cat’s meow,” will be the first GM division to come with Super Cruise, the company’s most ambitious technological foray since automatic transmission. The system isn’t fully autonomous. Pairing adaptive cruise control with lane-centering technology, it will allow drivers, or whatever they’re called in the future, to cede control to the car only on the highway. It will also, if all goes according to plan, propel GM into a multibillion-dollar race for the future of human mobility.

The question is whether GM can get to the future on time. Super Cruise won’t reach the market until 2017. Elon Musk has just begun offering autopilot on his Tesla Model S. Mercedes-Benz, BMW, Audi, and Volvo have similar hands-free driving systems in the works. Then there’s Google, which wants to skip the half-measures and do a full-on moonshot: totally autonomous cars that, regulators willing, won’t even come with a steering wheel or gas pedal. Google’s latest prototypes are already driving themselves around Silicon Valley, where they’re known as Koala cars because of their bulbous shape, and they may be available for purchase right around the time GM’s hands-free Caddy hits showrooms.

Google, especially, has Reuss’s attention. Last year he declared it “a very serious competitive threat.” At other times, he’s been snappish: “We’re in the car business today, and they’re not,” he said over the summer. But on the GM test oval, as he rides in the Super Cruising Caddy, he’s talking peace, perhaps even alliance. “I’m not sure it’s an us-vs.-them thing,” he says. Whether or not the partnership comes to pass (they already work together on some smaller stuff), Reuss, 52 and a GM lifer, says it’s imperative that he— Suddenly a crescent-shaped light on the steering wheel goes from green to red, and the Caddy starts drifting in its lane. Reuss grabs the wheel. A test car just whooshed by on the left, and another slowed down on the right—too much traffic for Super Cruise, making it shut down.

“That’s stuff we need to just work on,” Cindy Bay, the project’s head engineer,pipes up from the back seat.

“Yep,” Reuss says, hitting a couple of buttons to restart Super Cruise. “We need to develop it.”

“It’s like saying, ‘If I work really hard at jumping, one day I’ll just be able to fly.’ ”

That’s Chris Urmson, technical director of Google’s car program, during a TED Talk in May. “The prevailing philosophy is that we’re going to take the driver-assistance systems that are in the vehicle today, and we’re going to incrementally make those better and better. And eventually we’ll get to this point where we have self-driving cars.” Urmson’s speech, viewed 1.4 million times at ted.com, is classic Silicon Valley disdain for Detroit.

That kind of talk annoys Reuss, who says GM can “disrupt” with the best of them. He uses the term 14 times the afternoon of the test drive. How to pay for that disruption is the challenge. Google, deriving profits from its ubiquitous search engine, one of the most lucrative businesses ever devised, has the luxury of taking a clean-sheet approach. It has a profit margin of about 22 percent and a $495 billion market capitalization—more than triple that of GM, Ford, and Fiat Chrysler combined.

GM, whose profit margin is less than half of Google’s, can’t pour endless amounts of money into developing a driverless car. (Neither company will disclose what it’s actually spent on the technology.) But it has to finance its disruption somehow. In a sense, Reuss explains, the company has no choice but to be incremental, slowly seducing commuters and selling ever more cars—at fatter profits—as the technology improves.