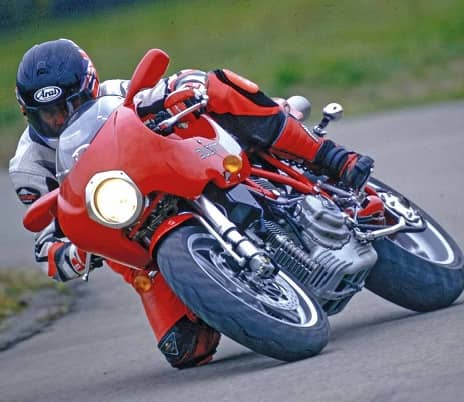 Our correspondent from Europe, Alan Cathcart, got the chance to ride the Ducati MH900e when it was launched at the beginning of the millennium. Here are his impressions.

My chance to ride the pre-production prototype MH900e stamped with number 0000/2000 on the silver plaque atop the fuel tank shroud enveloping a tiny 8.5 litre plastic fuel tank (this was not a bike for long journeys!) came on a freezing cold day in January 2001 with the mercury barely registering above zero, though it did provide me with some welcome surprises. Bottom line first: this was a far more capable road bike than I and probably most other people ever dreamed it would be. 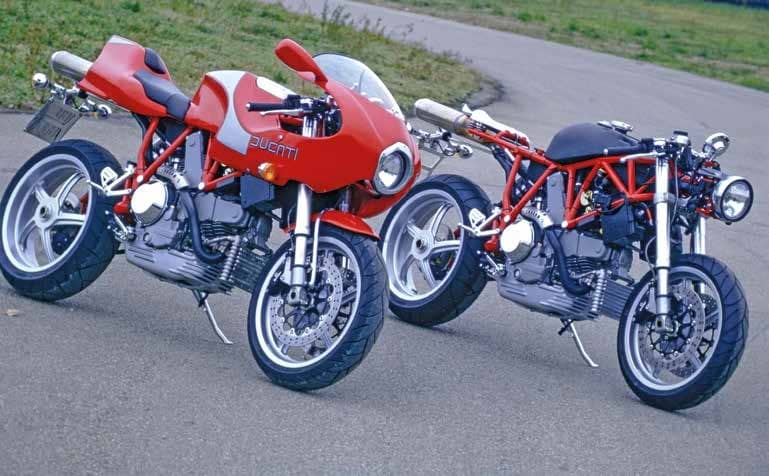 Certainly, the proportions of the MH900e were quite unlike the long, relatively low Hailwood/NCR TT-winner’s, with its rangy riding position and lengthy wheelbase. At 1415mm on the MH, this was a far cry from the original bike’s 1500mm stride, and it also delivered a more close-coupled riding position than the older bikes’ stretched out stance. Also, because of its jacked-up rear end, there was a fair bit more weight on your wrists and shoulders than on the older V-twins. The abbreviated seat with the twin exhausts protruding rearwards was a standout feature, and so too was the pointy-nosed half-fairing blending with the fuel tank, shaped to recall the one-piece seat/tank unit of Hailwood's TT-winner, surmounted by the '70s-style Ducati logo. The intricately shaped single-sided tubular steel monobraccia swingarm was a true work of art, a clever reinterpretation of a modern day Ducati trademark in the materials of the past. For many people this represented the bike's single most admirable component - a masterpiece of tube-bending and metalwork, The MH900e's Marchesini wheels were unique to that model.