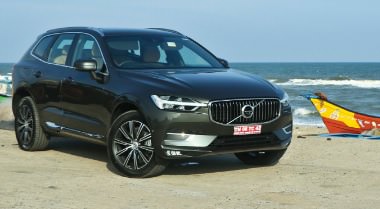 Quintessential Scandinavian design, the Volvo XC60 is a healthy mix of luxe and power. We test its strength on the East Coast road and are pleasantly surprised by both its power and aesthetics

Similar to the compact SUV segment that has caught the fancy of Indian buyers, luxury SUVs are slowly but surely following suit. Taking a cue from the likes of Audi Q5s, the soon-to-be launched Lexus NX300h and the BMW X3, the Volvo’s XC60 has been steadily wooing the Indian markets and racking up handsome sales figures while at it. Having launched the new generation XC60, Volvo is all set to up its game. So what does this new SUV pack in?

For starters, it is based on Volvo’s highly versatile Scalable Product Architecture (SPA) platform and is 44mm longer, and 11mm wider as compared to the previous version. It also sits 14mm lower than before. As far as the looks go, true to its Scandinavian roots, the XC60 shares an uncanny resemblance to the striking XC90 and the S90. However there are some features that make the XC60 unique.

One of which is the extended LED headlamp panel that stretches all the way into the grille. While it continues to have Thor’s hammer daytime running lights, the grille comes with a healthy dose to chrome embellishments. Overall the SUV looks sharp, irrespective from where you decide to look at it. In profile, the large diamond-cut 19in alloy wheels look stellar and do a splendid job in filling up the wheel well making it proportionate with the rest of the car. The car maker has also added a generous amount of chrome to make the profile stand out.