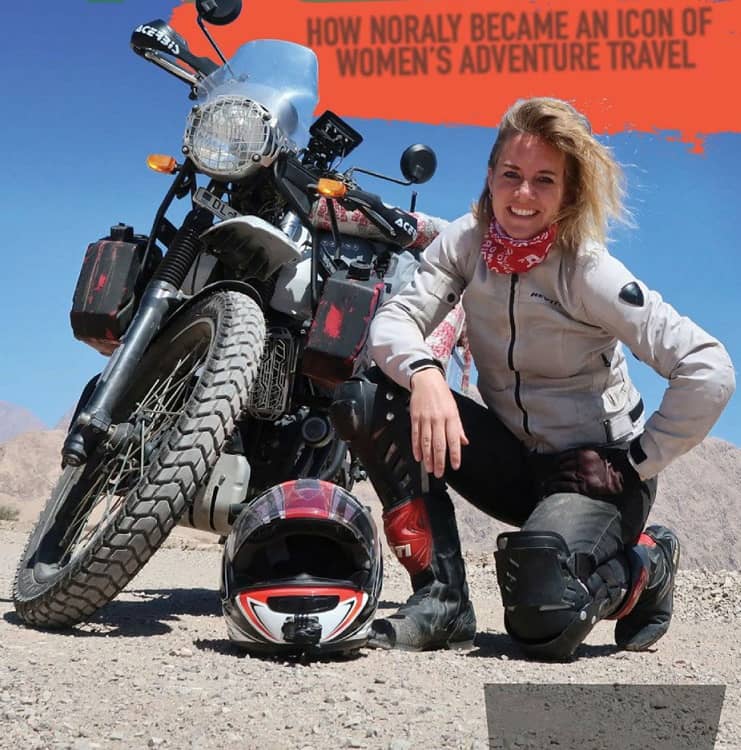 HOW NORALY BECAME AN ICON OF WOMEN’S ADVENTURE TRAVEL

The world knows Noraly Schoenmaker, a 32-year-old Dutch traveler and adventurer, as “Itchy Boots.” This is the name of her insanely successful YouTube channel, which now boasts nearly half a million subscribers and allows Noraly to travel full time. However, Noraly wasn’t always a social media star. After getting a degree in geochemistry, she left her home country to work in Australia. There, Noraly started working in gold mining, accumulated some savings, and set off on a two-year backpacking trip around the world.

Then, she did another five-year stint as an international contractor, her job taking her from Brazil to the Bahamas, Kuwait, Kazakhstan, and beyond. Eventually, Noraly found herself traveling in India, where she decided to rent a motorcycle.

“I did about 3,000 kilometers across the Himalayas on a Royal Enfield and I loved traveling by bike so much I decided to buy one,” Noraly recalls. After purchasing a Royal Enfield Himalayan, which she promptly named “Basanti,” Noraly rode to Malaysia, then shipped the bike to Oman, rode through Central Asia and back to Europe. At that point, the fearless adventurista already knew she wanted to keep on traveling and began making plans for the next leg: the Americas.

There was just one tiny issue... it was impossible to register Basanti in the Netherlands, so Noraly had to leave the bike there and purchase another Royal Enfield, this one named “Dhanno,” which she shipped to Patagonia and then rode to Peru. The bike is currently awaiting her return, as Noraly is back in the Netherlands waiting out the CV19 crisis.

As she’s regrouping and attempting to determine when to resume her journey, we caught up with Noraly to chat about bikes, travels, and ways to live a nomadic life.

ADV: Many assume you need tons of experience to ride a bike around the world, but you’ve only been riding since 2015, taking offon your RTW shortly after. Have you been pretty much learning as you went?

NORALY SCHOENMAKER: I was definitely not the most experienced rider. But most of all, I had absolutely no off-road experience. I was used to riding my Ducati Monster on the smooth tarmac roads of the Netherlands.

I’d never even encountered a pothole before India, let alone dodgy trails through the mountains. When I took that rental Himalayan through India, it was the first time I’d ever ridden gravel roads and unpaved trails. I managed, but can’t say I did a great job.

So, when I arrived in Oman and Basanti’s arrival was delayed two weeks, I decided to get some off-road lessons from Oryx Adventures and that greatly improved both my skills and confidence. After that, I’ve just been improving and learning on my own.