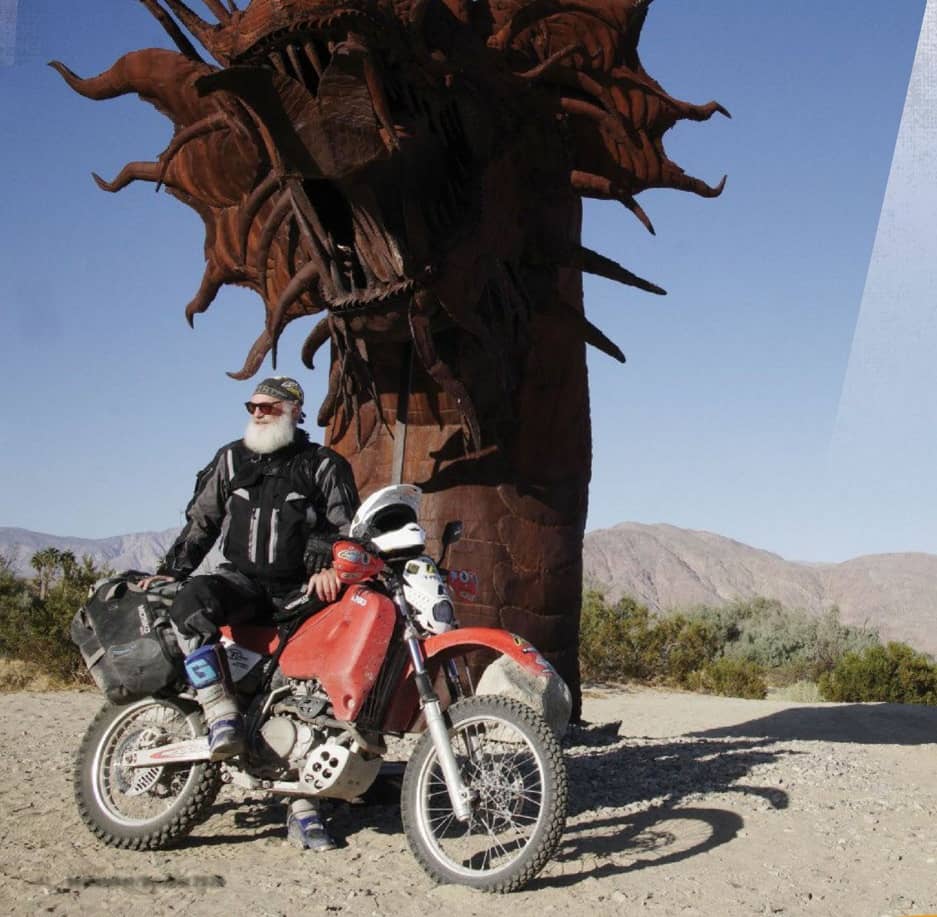 It was late afternoon, high on a ridge in the Rockie s, and I must have come into signal range, as my phone lit up with a message. Stopped in the middle of the trail, it indicated that my youngest had tried calling. She wanted me to come home, as she was ill. Although concerned, I also felt relief that this would give me a valid reason to jump ship. Fo r several weeks I’d been riding nothing but gnarly trails day in and day out and had begun to question whether taking on one Backcountry Discovery Route after another was a good idea.

What was I thinking when I came up with this three-month off-road marathon idea? That I was still that young, fearless, strapping adventurer who rode across Africa more than 30 years ago? Aching knees were making it increasingly clear that my aging body was in disagreement with this foolhardy undertaking. So this unexpected phone call was my chance to abandon this overly ambitious endeavor without having to admit to myself that I wasn’t physically up to the challenge.

However, I’d not taken into account the tenacity of my wife, a lifelong adventure rider herself. Upon hearing my plan to fly back to Thailand to look after our daughter, she told me in no uncertain terms that she was against it, insisting that I stay the course no matter what. As she was in California for business, she’d call our domestics to ensure our daughter was taken care of. Besides, she’d already booked a flight for our mid-trip rendezvous in Washington. But when I mentioned that the long days in the saddle were killing my knees and I wouldn’t be able to finish the journey, she threatened divorce if I dared return home early. As long as I could kick start the XR650R, I was to continue riding. She argued that I hadn’t flown halfway across the globe to give up midway through my marathon because of some old-man ailments.

What choice does a guy have when facing such a force of nature? So, I regrouped and continued the arduous journey. Calling mindfulness to the rescue, I gradually shifted focus from the nagging pain to the challenges of trail riding and the ever-changing scenery. In the ensuing days, to my surprise, the knee issues slowly dissipated and my enjoyment grew exponentially. I rode once again with gusto.

Lying quietly next to the bike, gazing at the Milky Way after a fabulous day of riding trails, I reflected on the past weeks. After a lifetime of exploring the globe by motorcycle, the attraction and simplicity of the adventure riding lifestyle had not lost any of its appeal. Venturing into the wilderness for days on end is an existential experience. While it was a riskier undertaking in the bygone era before the internet, SPOT trackers, satellite phones, and GPS receivers, adventure riding remains a risky and challenging, yet fulfilling, liberating, and ecstatic experience.

I began this journey in Durango, Colorado, where I had parked a 2000 Honda XR650R back in 2011 after exploring southwest Colorado and the canyons around Moab, Utah. The plan had been to return in the following years for further explorations but, as John Lennon philosophized, “Life is what happens to you while you’re busy making other plans,” and my trusty dual-sport languished in a shed for the next several years.

The first task was to rebuild the gummed-up carburetor. But before doing that, I kicked the engine over to determine if the piston or rings were seized. To my surprise, on the fourth kick, the engine fired up and idled perfectly, running on eight-year-old gasoline. I was flabbergasted!