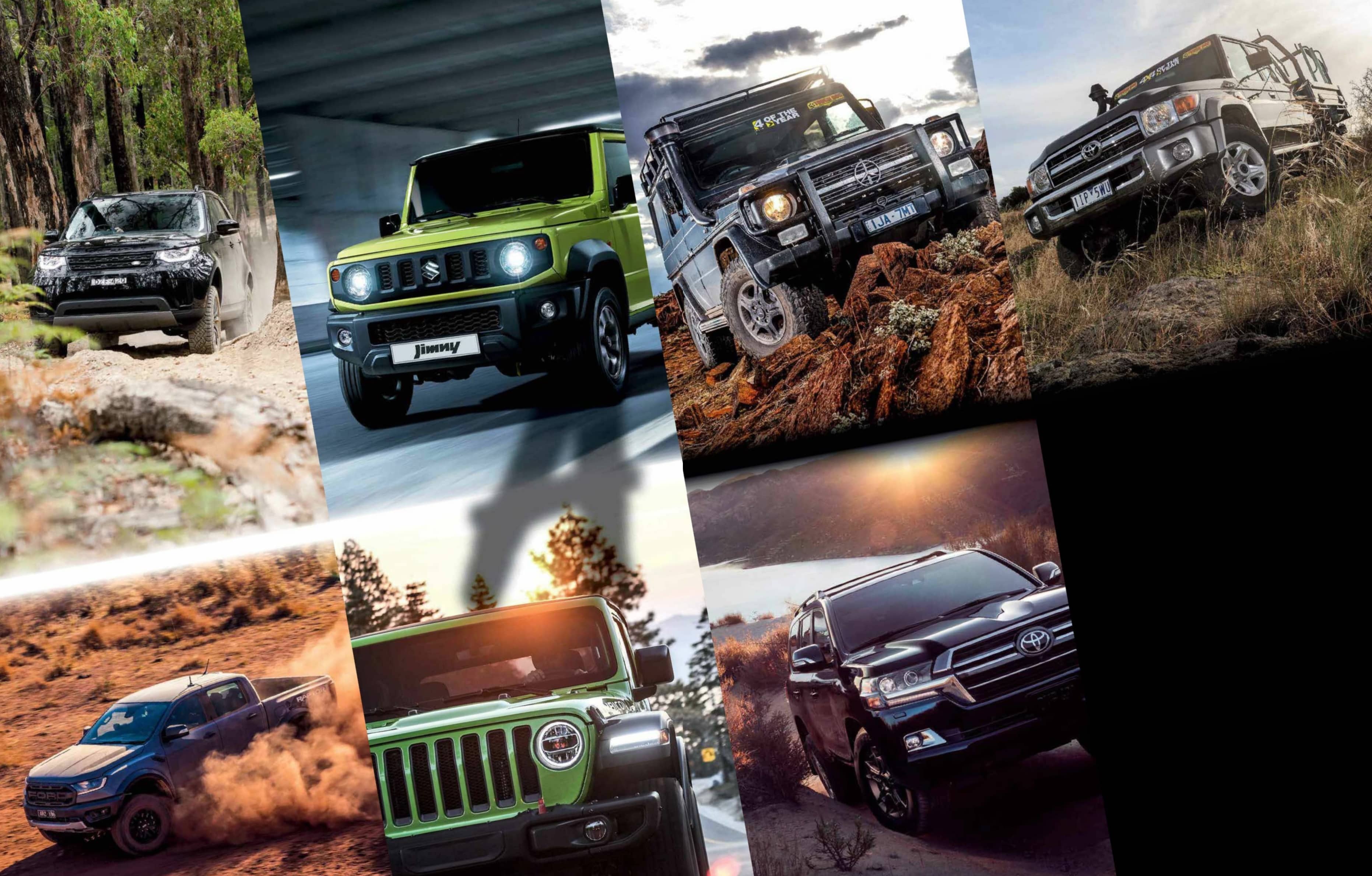 Keen To Head Straight From The Showroom To Serious Off-road Tracks With Only A Tyre Stop Along The Way? These Are The Seven Best 4x4s Money Will Buy.

IMAGINE you have all the new 4x4 dealerships you could wish for, all closely grouped together in some remote and rugged location. All you have to do is walk into one and pick a 4x4 to drive back home … home being hundreds of kilometres away via the roughest tracks imaginable. In some parts there may not be tracks at all.

You can’t modify your chosen vehicle as there are no engineering workshops among all the new dealerships, but factory options are available. And there’s a well-stocked tyre shop, so you can swap to more off-road-friendly tyres provided you stay legal (we know state regulations vary, so for argument’s sake let’s say NSW). So what new 4x4 would you pick if price wasn’t an issue?

It may be a fanciful scenario, but it’s the thinking behind compiling this list of the most off-road-capable showroom-stock 4x4s, listed one to seven on their ability to cover any type of off-road terrain you can imagine: soft sand, slick mud, ruts, holes, rocks, steep climbs and descents, or any combination of the same. 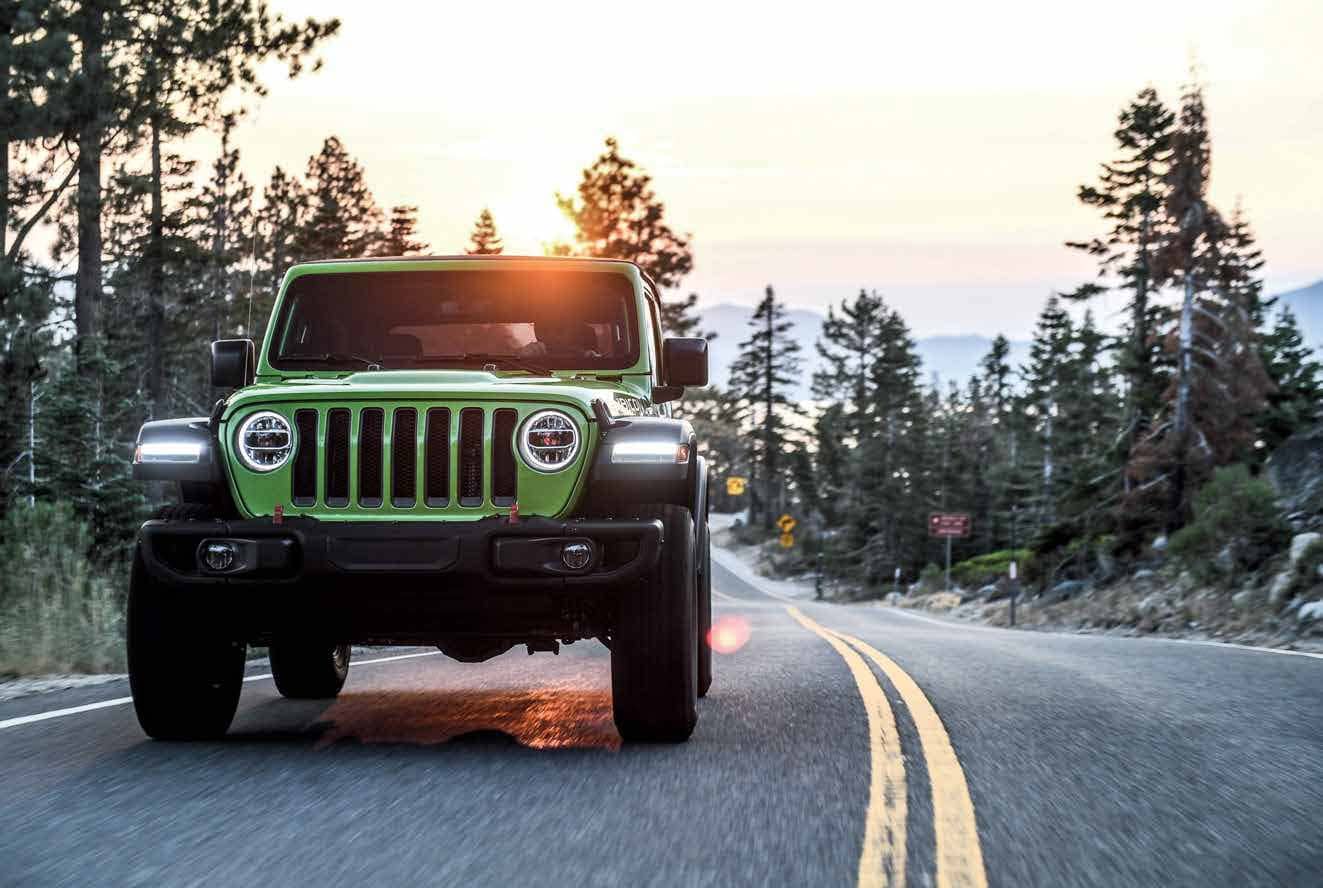 ORIGINAL AND STILL THE BEST

ALL JEEP WRANGLERS ARE CAPABLE 4X4S, BUT THE RUBICON IS THE BEST OF THE LOT.

IS THERE currently a more iconic 4x4 available than the Jeep Wrangler Rubicon? Not only is the Rubicon the most off-road-capable vehicle in the Wrangler range, but it’s also the latest hero vehicle in a long line of 4x4s born of the original World War Jeep, the most iconic 4x4 of all time. Big call? Then here’s a quick history lesson: If it wasn’t for the original WWII Jeep there would be no Land Rover, Toyota Land Cruiser or Nissan Patrol as we know them today. End of story.

Fast forward to 2019 and the latest iteration of this iconic 4x4 has just arrived in Australia. The new Wrangler JL replaces the Wrangler JK that dates back more than a decade now. The JL brings new powertrains and changes in engine availability, most notably in the Rubicon which is now available with a diesel engine. In fact, it’s the only model in the new range that has a diesel. The diesel in question comes from Fiat Powertrain Technologies and has been used previously in the KL Cherokee and a couple of Alfa Romeo models, the Giulia RWD sedan and the Stelvio SUV. It’s a Euro 6-compliant (and therefore ahead of the game here) 2.2litre four-cylinder (single) turbo-diesel that makes a punchy 147kW and 450Nm despite its relatively small capacity.

The JL Rubicon is still offered with a petrol engine: a 3.6-litre Pentastar V6 that claims 209kW and 347Nm and is carried over from the JK Rubicon. The petrol engine is a good, relatively modern design (without being cutting edge) that’s $5000 cheaper than the diesel, and it’s simpler and cheaper to service so it makes a strong buy-me argument even if the diesel is more economical and the better drive. 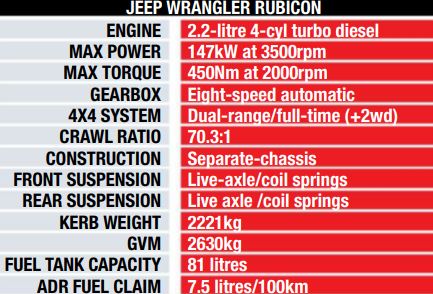 In another significant JL Series change, a manual gearbox is a thing of the past as all new Wranglers are automaticonly. That may be bad news to some, but the good news is the gearbox in question is the ZF eight-speed (made under licence by Chrysler, in this case), arguably the best automatic on the planet. 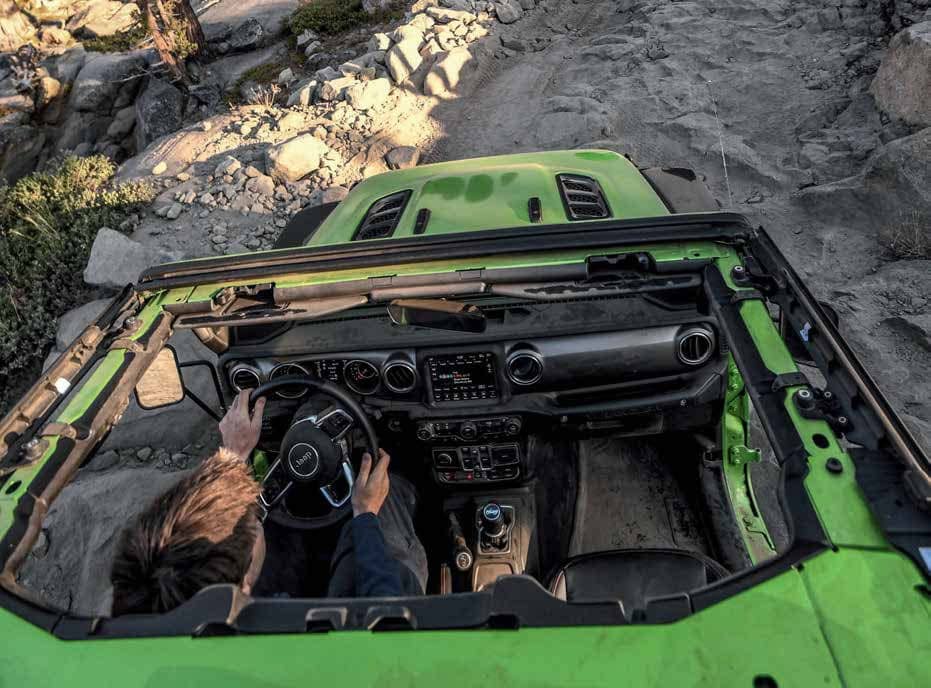 These changes aside, the new Rubicon carries over the defining elements of the old Rubicon, namely front and rear driver-switched differential locks and a front swaybar release which, when activated, adds to the already impressive front wheel travel. The Rubicon also gets lower axle ratios compared to non-Rubicon models and impressive 77.2:1 (with the petrol Rubicon) and 70.3:1 (with the diesel) crawl ratios. Last, but certainly not least, are the BFGoodrich 32-inch KM3 mud-terrain tyres. 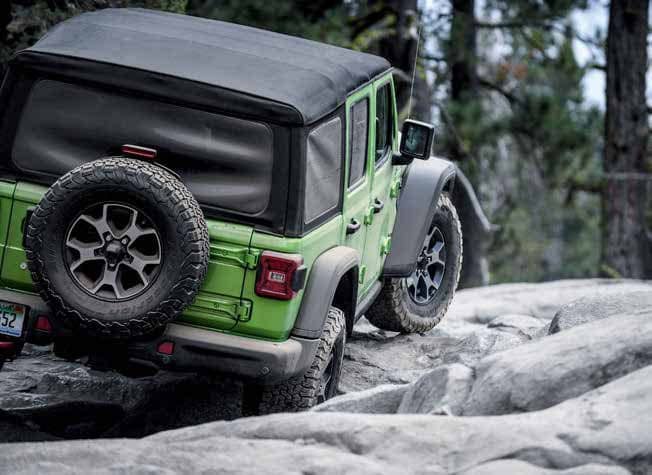 Like the Ranger Raptor, the Rubicon is a genuine factory custom pitched at off-road use and is arguably the best out-ofthe-box 4x4 you can buy if getting seriously dirty is your idea of fun. Just the fact it’s a separate-chassis design with live axles at both ends puts it in a good place before you start.

Only one thing could be better and that’s a short wheelbase two-door Rubicon thanks to its notably better ramp-over angle. As it is, the ‘shortie’ Wrangler is only available as a Sport or Overland model. 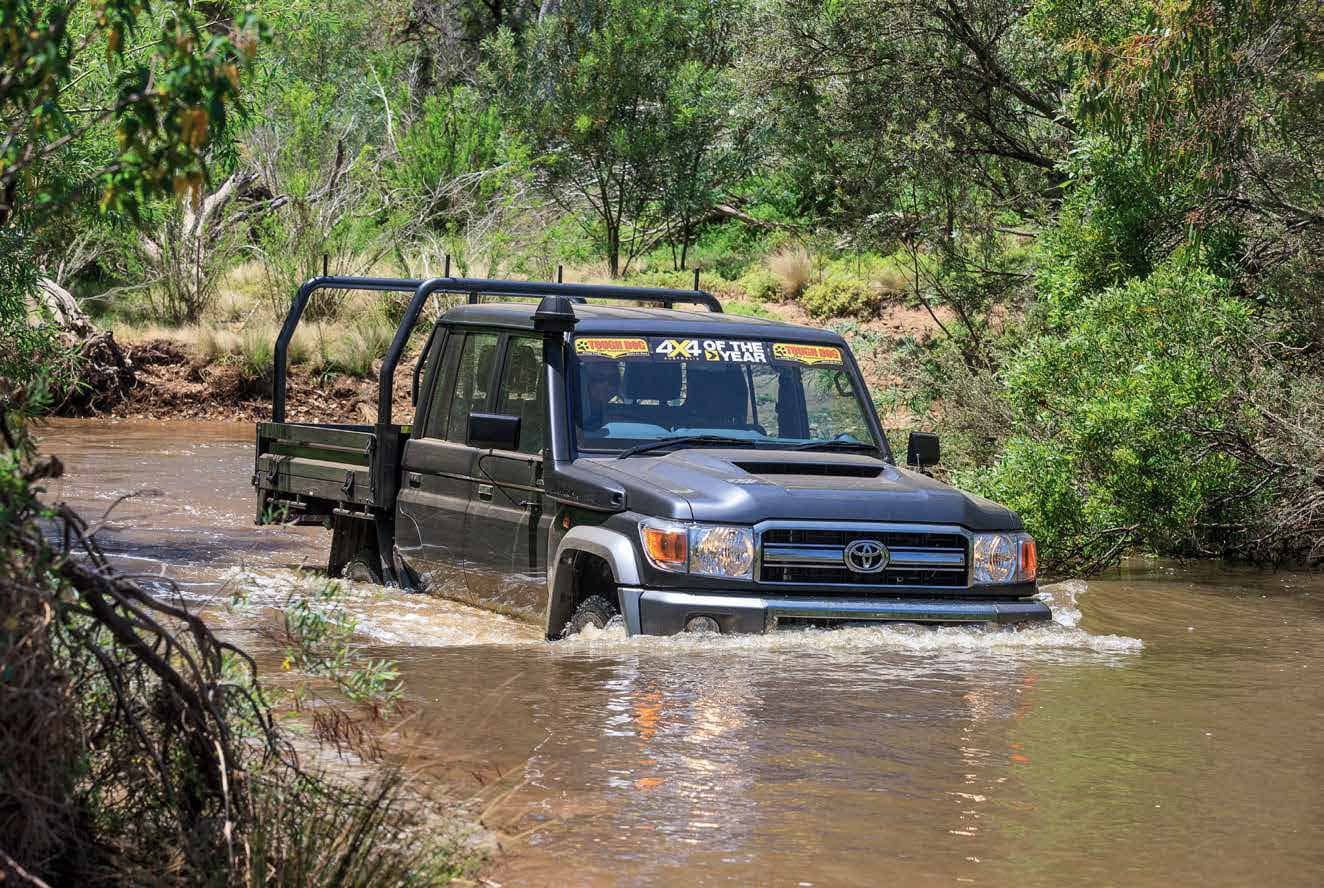 NO TOYOTA 4X4 IS TOUGHER THAN THE 70 SERIES.

THE 70 SERIES, currently sold as a 76 Series wagon, 78 Series TroopCarrier and 79 Series single- and double-cab utes, is the latest in a long line of Toyota 4x4s that trace back to the very first Land Cruiser; although, it wasn’t called that at the time. It was the ‘BJ’, where B stood for

Toyota’s B Series diesel engine and J for Jeep, a name used then in the generic sense but subsequently changed to Land Cruiser when Willys-Overland, owners of the Jeep name, pressed for trademark violation, for which Toyota apologised. Lost in the translation, perhaps?

Just about any current 70 – 76 wagon, a 78 TroopCarrier or one of the 79 utes – could fill this spot, but we have gone for the 79 double-cab due to the functionality that a ute always brings in the bush over a wagon. Feel free if you like to make an argument for a 76 thanks to its notably shorter wheelbase (450mm shorter than a 79), or for the TroopCarrier for its extra 50 litres of fuel capacity over the 130-litre capacity of all non-78 Series models. 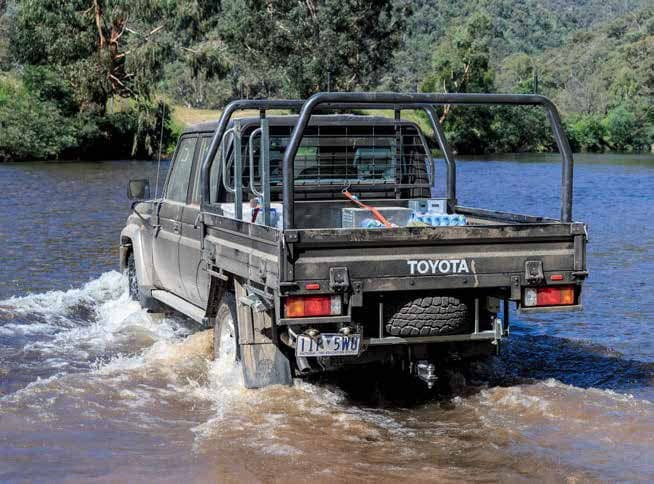 Models not applicable include lower spec (WorkMate) 76s, 78s and single-cab 79s, as these variants don’t come with the driver-switched front and rear lockers, even as options. And the factory lockers are a significant part of the 70’s off-road armoury.

All 70s have the same dual-range, part-time 4x4 system with a more-than-handy 44:1 crawl ratio, and it’s the only vehicle here that doesn’t come with an automatic gearbox, another telltale of its commercial, working-vehicle persona. 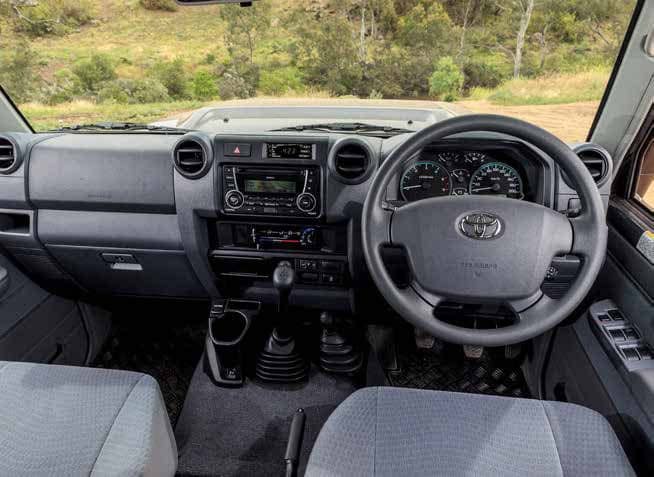 The 70’s tough underpinnings, generous ground clearance and good vision from its upright, truck-like cabin underpin its formidable off-road prowess. The live axles also provide decent wheel travel, although not as good as some here. That’s where the factory lockers come to the fore. Mind you, the ‘Active Traction Control’ (A-TRC), specifically tuned for off-road rather than on-road use, works very well. Toyota, along with Jeep and Land Rover have led the way with the evolution of electronic traction control away from just an on-road safety benefit to a serious off-road enhancement. 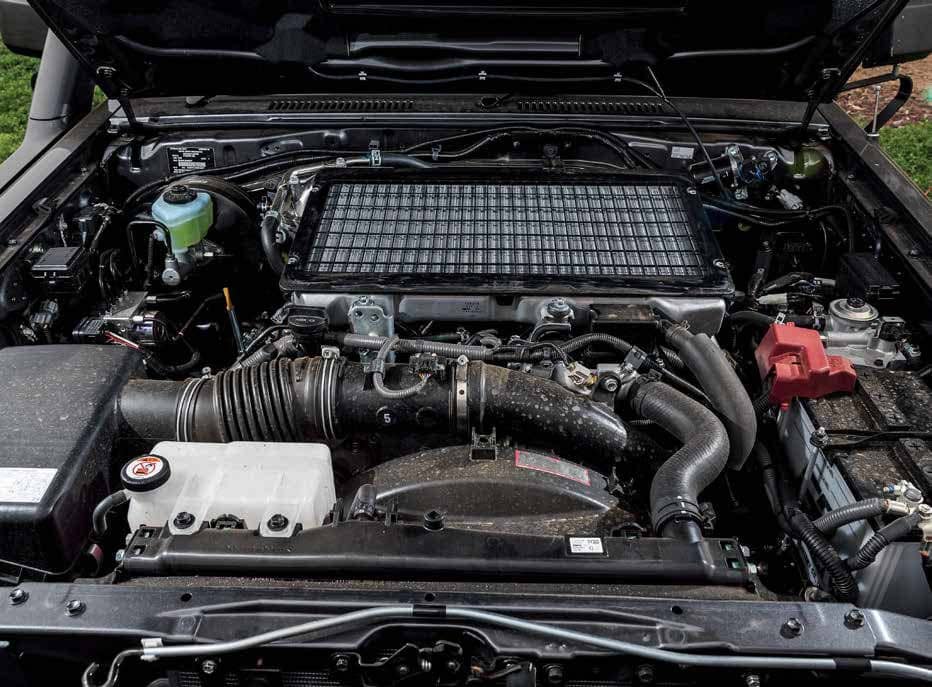