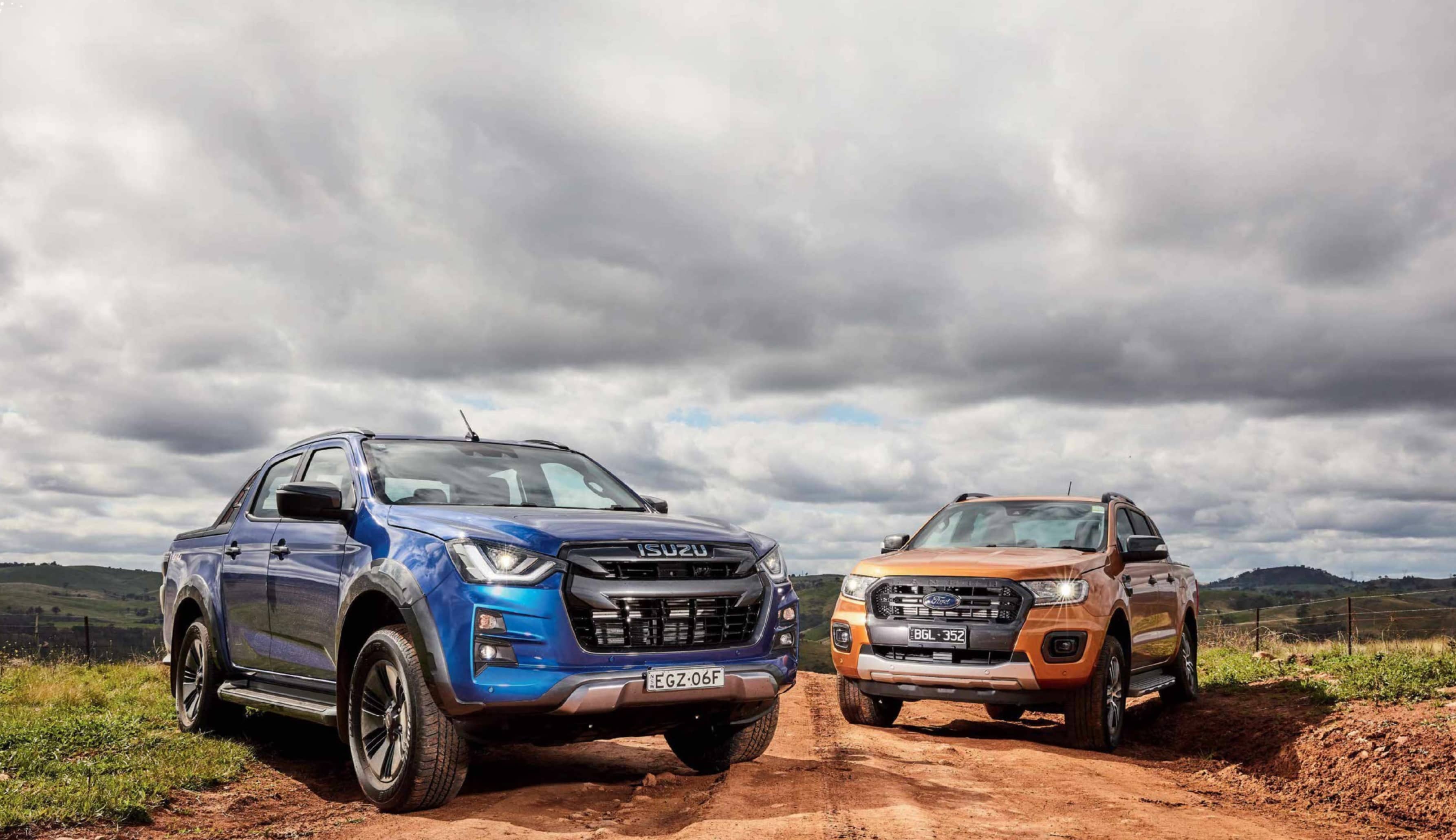 The next-generation D-Max is finally here, but how does it shape up to an established benchmark like the Ford Ranger? We find out…

I SUZU Ute Australia calls its new-generation D-MAX a ‘third-generation’ model, but that undersells its heritage. It may be the third generation Isuzu ute sold in Australia since the brand launched here in 2008, but it’s the latest in a long line of Isuzu utes that stretch back more like six generations and all the way to 1972. In Australia, the earlier Isuzu utes were sold for 40 years, mostly as the well-loved and well-regarded Holden Rodeo.

This new D-MAX is not just of vital importance to Isuzu here in Australia, but it will have a wider impact in the overall ute market. Mazda’s soon-to-arrive new BT-50 is effectively a new D-MAX also, just one with different body panels and interior fit-out. It will end Mazda’s long product-sharing relationship with Ford in this market sector.

The new D-MAX, and its Mazda twin, will also be the first entirely new-generation utes from any major manufacturer to arrive in Australia for five years and will get the jump on soon-to-arrive new-generation models from Ford and Volkswagen.

To see how the new D-MAX in the range-topping X-Terrain spec measures up, we have pitted it against a Ford Ranger Wildtrak, one with the 2.0-litre four-cylinder bi-turbo diesel. We chose this powertrain over the Ranger’s older, more workmanlike 3.2-litre five-cylinder diesel for its superior refinement and economy. Being the newest powertrain across the popular ute segment it seemed a better benchmark for the heavily revised D-MAX powertrain.

The Ranger is also at the pointy end of the current ute market in terms of its on-road ride and handing, off-road prowess, and cabin comfort and space, so again a good benchmark. 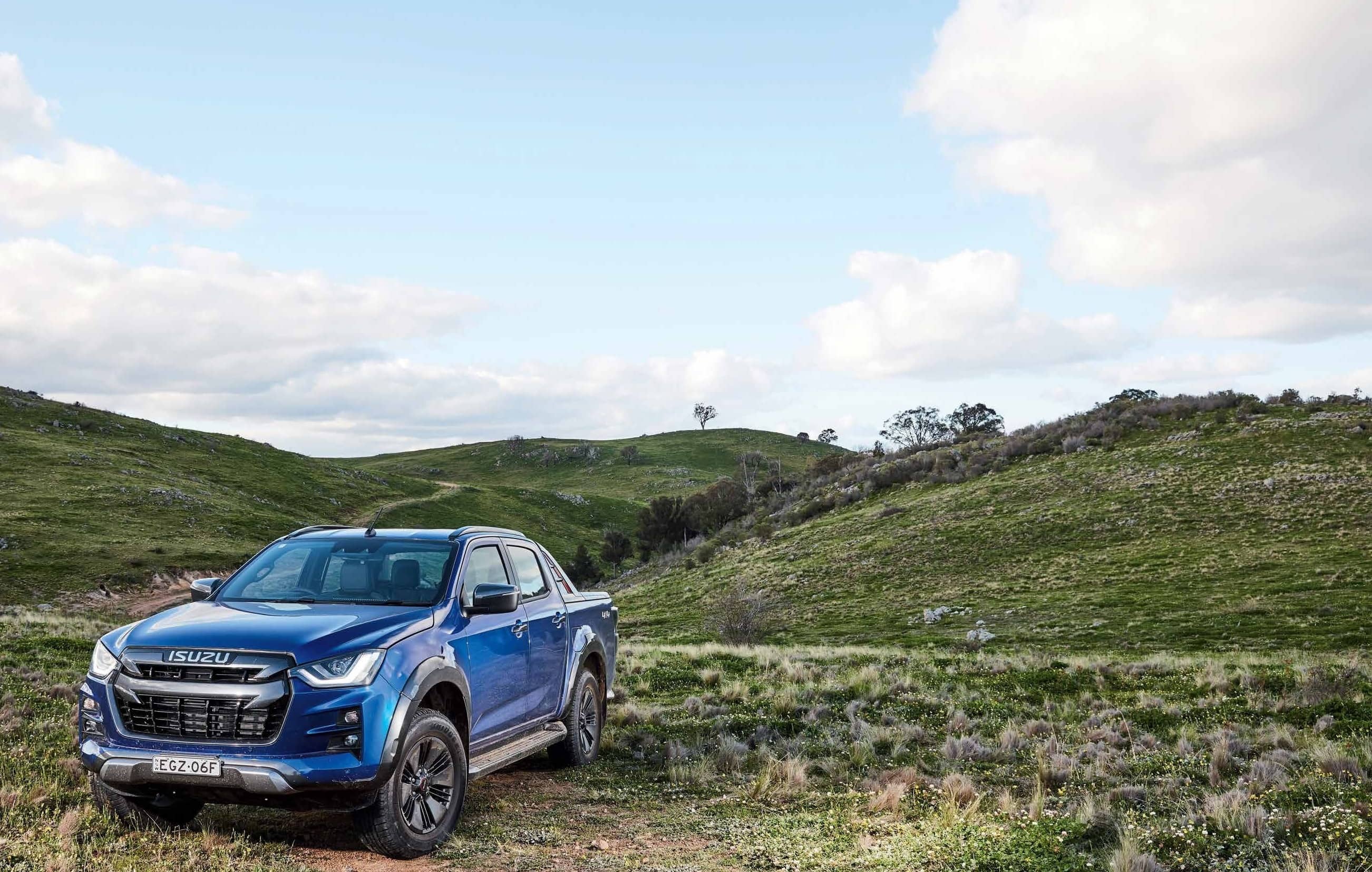 ASIDE FROM THE POWERTRAIN, THE NEW D-MAX IS JUST THAT. IT’S NEW ... AND FROM THE GROUND UP.

AT first glance Isuzu’s new D-Max may just look like a revision of the D-Max that’s been around in one form or another since 2012, but in this case appearances are deceptive. The new D-Max represents a full generational change and, importantly, is an all-Isuzu design whereas the previous generation D-Max started life as a joint venture with General Motors. Before that, Isuzu always designed its own utes from the ground up anyway (rebadged here as the Holden Rodeo), so this new model is a return by Isuzu to doing what it has traditionally done. 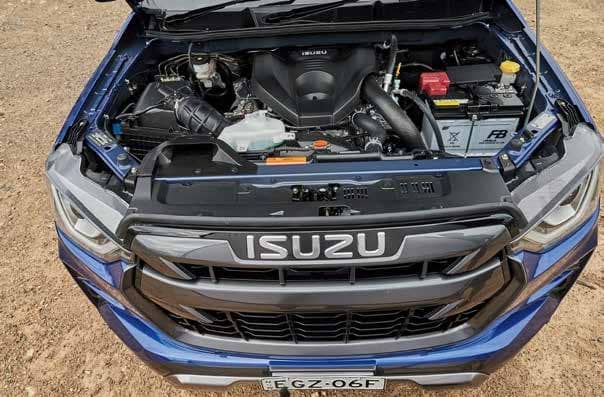 The least changed aspect of the new D-Max is the powertrain, but even that has been significantly revised. More important in the overall scheme of things is an all-new chassis and cabin, and a comprehensive suite of advanced safety features right across the model range.

THE new D-Max’s 3.0-litre four-cylinder turbo-diesel is the latest member of an engine family that dates back to 2004. In this latest iteration, it claims 140kW (up from 130kW) and 450Nm (up from 420Nm). More importantly, the extra torque is on tap at a much lower rpm and is also produced higher up in the rev range, with the 450Nm maximum produced from 1600rpm to 2600rpm.

The extra power and torque comes courtesy of a more efficient variable-geometry turbocharger and a new high-pressure common-rail injection system. Other changes run to revised combustion chambers, new pistons, and modified cylinder block and crankshaft. As with the last of the previous generation D-Max engines (from 2017-on), the new engine has a diesel particulate filter as part of its Euro 5 emissions compliance.

The D-Max is available with both revised six-speed manual and automatic gearboxes, although the X-Terrain is auto only. As before, the manual is an Isuzu in-house design; the auto from Aisin.

On the road the driving experience is both familiar and different. The new engine still has much of the feel and workmanlike character of the older D-Max, but is noticeably quieter and more responsive in general driving. At higher engine speeds it’s still somewhat harsh, but not as much as the old engine. It’s also more muscular, everywhere. 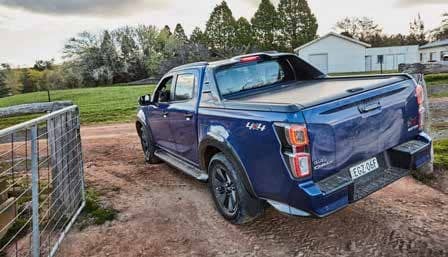 Where the previous D-Max was a fair way off the performance of the Ranger bi-turbo, this new D-Max isn’t, even if the Ford is still a bit quicker once in stride.

The revised Aisin automatic is also much improved, with faster shifting and far more proactive and sporty shift protocols. The extra torque at lower engine revs also helps to counter the very tall but unchanged gearing, which means less shuffling between fifth and sixth on undulating country roads, which was a less than likeable trait of the previous D-Max.

THE new D-Max sports an all-new, more rigid ladder frame with notably larger section side rails and additional cross bracing, and new-design front and rear suspension. At the front the upper and lower wishbones are far more substantial and are much farther apart in the vertical plane, while the sway bar now mounts to the top rather than the lower wishbone. At the rear the three-leaf springs are claimed to be lighter, yet stronger. Bigger front brake rotors with twin-piston floating callipers and electric power steering are also highlights of this all-new chassis. With bigger brakes, 17s rather than 16s are now the smallest wheels that can be fitted. 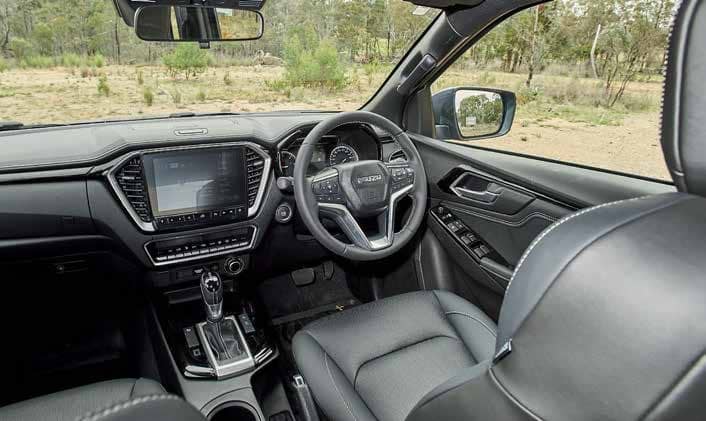 On the road the D-Max’s ride and handling is much improved and is a far more noticeable advance than the powertrain upgrades. Where the powertrain offers a still somewhat familiar driving experience, the new chassis makes the D-Max feel like a completely different ute, especially on poorer roads and at higher speeds where it is far more composed, confident and engaging to drive than before.

The electric power steering means a light steering effort at parking speeds while still providing decent feel and feedback at highway speeds. The only glitch here is that the lane-departure warning and prevention safety tech can be over-zealous at times on some roads. And while you can turn it off via the settings menu, this can’t be done on the move and it always defaults to ‘on’ when the engine is stopped and then restarted. 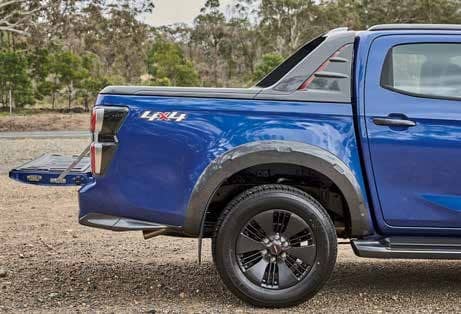