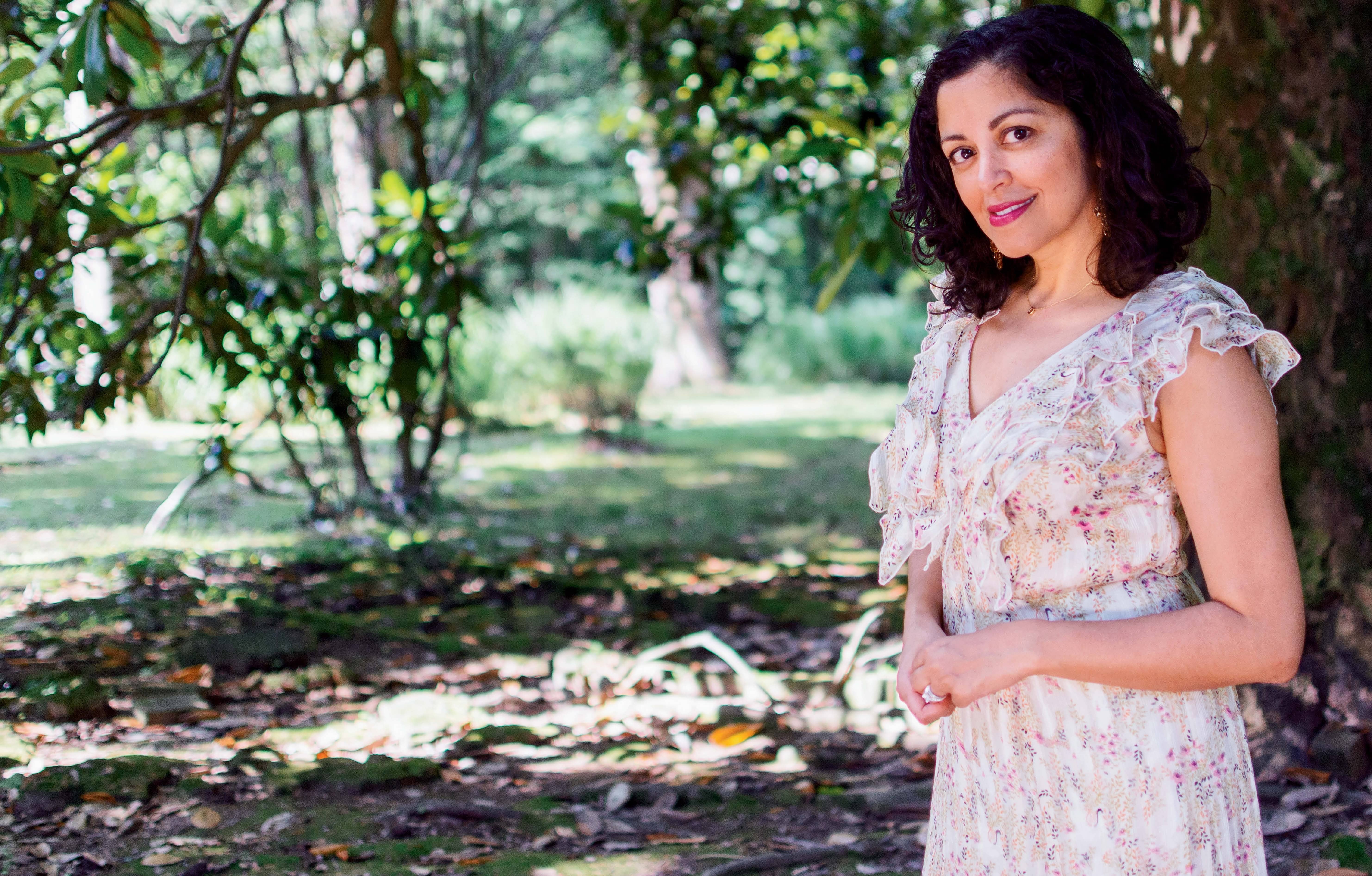 IN HER NEW ESSAY COLLECTION, PUBLISHED BY MILKWEED EDITIONS IN SEPTEMBER, POET AIMEE NEZHUKUMATATHIL TURNS HER CREATIVE POWERS OF ATTENTION, PLAY, OPENNESS, AND LOVE TO A WORLD OF MAGIC AND IMAGINATION OUTDOORS, CULTIVATING THE FAMILY GARDEN AS A LOVE LANGUAGE THAT CONNECTS ALL OF US.

ROSS GAY
I was introduced to Aimee Nezhukumatathil’s work on a long drive from New Jersey to Maine, while tagging along with my friend Patrick Rosal, who was joining Adrian Blevins, Tyehimba Jess, and Gibson Fay-LeBlanc for a reading for From the Fishouse, the wonderful online audio archive of emerging poets started by Camille T. Dungy and Matt O’Donnell. Patrick had a stack of books with him—this was 2005, I think—and one of them was Aimee’s first book, Miracle Fruit (Tupelo Press, 2003). Needless to say I loved it. A couple of years later, spring 2007, Indiana Review editor Abdel Shakur and I invited Aimee, along with Patrick and Tyehimba and Aracelis Girmay, out to read at Indiana University, where I teach, for what was maybe—no, what was definitely—the best reading ever. I know, I know, there have been a lot of those. But this was one of them. We sang Billy Ocean. Everyone in the Waldron theater in Bloomington, Indiana, sang Billy Fucking Ocean. “Suddenly,” I’m pretty sure it was. Like I said: best reading ever.

Aimee and I became fast friends after that, writing (actual) letters, sharing work, the whole thing. In 2007 her second book, At the Drive-In Volcano, was published by Tupelo Press, and in 2011 we shared a book party at Cave Canem for her third book, Lucky Fish (Tupelo Press), and my second, Bringing the Shovel Down (University of Pittsburgh Press). Not too long after that we collaborated on a chapbook of epistolary poems about our gardens called Lace and Pyrite: Letters From Two Gardens (Organic Weapon Arts, 2014). I can remember in those poems feeling like, goddamn, it is not easy keeping up! Aimee’s images, her beautiful music, her capacity for metaphor: It was a little intimidating. I was definitely learning how to write better poems by being in her company like this. I was also, and more crucially, being schooled in openness, in ardor, in wonder. And I was being schooled in the ways the discipline and practice of wonder deepens my capacity to love what I already love and expands the horizons of what I might. I don’t know if I knew it then, but going back to read that chapbook, I see it plain as day. She was showing me a way to make the work that I have come to make.

Aimee has been cultivating the practice of wonder for her whole writing career, which now includes four books of poems: Oceanic was published in 2018 by Copper Canyon Press. Her new book, the essay collection World of Wonders: In Praise of Fireflies, Whale Sharks, and Other Astonishments, will be published in September by Milkweed Editions. World of Wonders, kind of like Aimee, is flabbergasted, gobsmacked, and astonished with glee by all kinds of creatures and phenomena, all kinds of kin, from flamingos to catalpas, from monsoons to corpse flowers, from dancing frogs to axolotls. In addition to being lyrical reveries and love songs and tender remembrances, some of these essays are also alarms, as Aimee writes of the octopus: “I am certain it knows we humans are messing up entirely, that in just a matter of decades the oceans will become unswimmable to any of us animals.”

Aimee was born in 1974 to a Filipino mother and a south Indian father. They moved around quite a bit; Aimee lived in Chicago, Iowa, Arizona, Kansas, New York, and Ohio and was often a new kid, often in mostly white schools. Her folks are avid gardeners and nature lovers, and you get the sense that Aimee’s sense of wonder, which she likewise is imparting to her two sons, comes from them. As she says in our conversation, the garden was her parents’ “main love language.”

After a fellowship at the Wisconsin Institute of Creative Writing, Aimee spent fourteen years teaching at SUNY in Fredonia. In 2016 she joined the faculty at the University of Mississippi in Oxford, where she and her husband, the essayist Dustin Parsons, teach. She recently finished a five-year tenure as the poetry editor of Orion magazine. We discussed our gardens, family, racism, corpse flowers, singing with birds, teaching, and, of course, wonder.

Ross Gay: This might be an easy question, or an overly open question, but I am so moved by your study and practice of wonder in this new book, and I kind of just want to ask you if you would talk about wonder for a little bit. Where does it come from for you?

Aimee Nezhukumatathil: Thank you so, so much. A wonder for me is when you get surprised by your own curiosity when confronted with something unfamiliar or unexpected and that sense of curiosity turns into a kind of joy and excitement. I moved around a lot as a kid, but the outdoors in any of those places for me was the easiest place of all to exist because I never had to explain myself or my family to anyone. Catalpa trees never asked me, “What are you?” So, in summer, for example, I’d be outside as soon as I was done with breakfast, come back inside for lunch, then I’d stay out again till sunset, and sometimes beyond that, to catch fireflies with my friends if I was lucky. If you let yourself be open to wonder, I mean really open yourself to being able to receive it, it’s the closest thing to falling in love I think—I feel like you can’t help but want to protect that animal or plant or person. But, yes, the ethics of wonder raises even more questions, right? Who gets to be outside? Who gets to enjoy being outside? Who gets depicted being outside in books and TV and movies? And if you do have the good fortune of being able to be outdoors for long stretches of time, then I’m guessing you want to tell others about it too–my goodness, how can you not want to share that goodness with others?

Gay: I’m going to keep digging, maybe selfishly, because, as you know, this is in the ballpark of my favorite things to talk about. World of Wonders models the practice of trying to be perpetually open to “astonishment” and recognizes astonishment, or wonder(ing), as not only required for transformation but maybe also required for our survival. Can you talk about that? And the second thing I want to ask you about is the connection between wonder and terror.

Nezhukumatathil: Oh—yes, that’s it! Of course wonder is required for transformation. I mean, without a capacity to wonder about life—animal or plant—besides your own, how much has been lost? How much violence to the planet and to one another has resulted because of that lack of imagination and wonder? It’s staggering. If you can’t imagine that cutting down this patch of forest is going to have consequences for house finches, tanagers, towhees, and dickcissels, and that in turn will have consequences for insects and moths, and that in turn will have consequences for frogs and snakes and salamanders—well, it’s easy to see how this lack of wonder and imagination and care can have terrible generational effects for people, too.

I’ve been visiting elementary school classes to teach poetry since I was in grad school, and little kids don’t have to be reminded or taught to wonder. They naturally are curious and astonished by cloud shapes, leaf shapes—bugs and birds—they have a gazillion questions for me about making a line of poetry, about the planet, and they naturally speak with metaphor. I’ll never forget one sweet boy who missed his dead mom and said, “I have a cloud in my pocket,” instead of saying I feel sad. Something happens, though, in high school or maybe junior high, when some of those same kids are taught that wondering and wandering is silly or uncool, and wanting to learn about the planet and really—about one another— often takes a back seat to what can earn them money. And of course we need money to function, and I love being able to help provide for my family, but I also try to suggest finding a different kind of currency—in addition to, not instead of—another way of being rich: with time, with friends, with knowledge. The Environmental Protection Agency did a study that found the average American spends 93 percent of their time indoors. Ninety-three percent! And this is in spite of so much science that shows how being outdoors is physically and emotionally good for you.