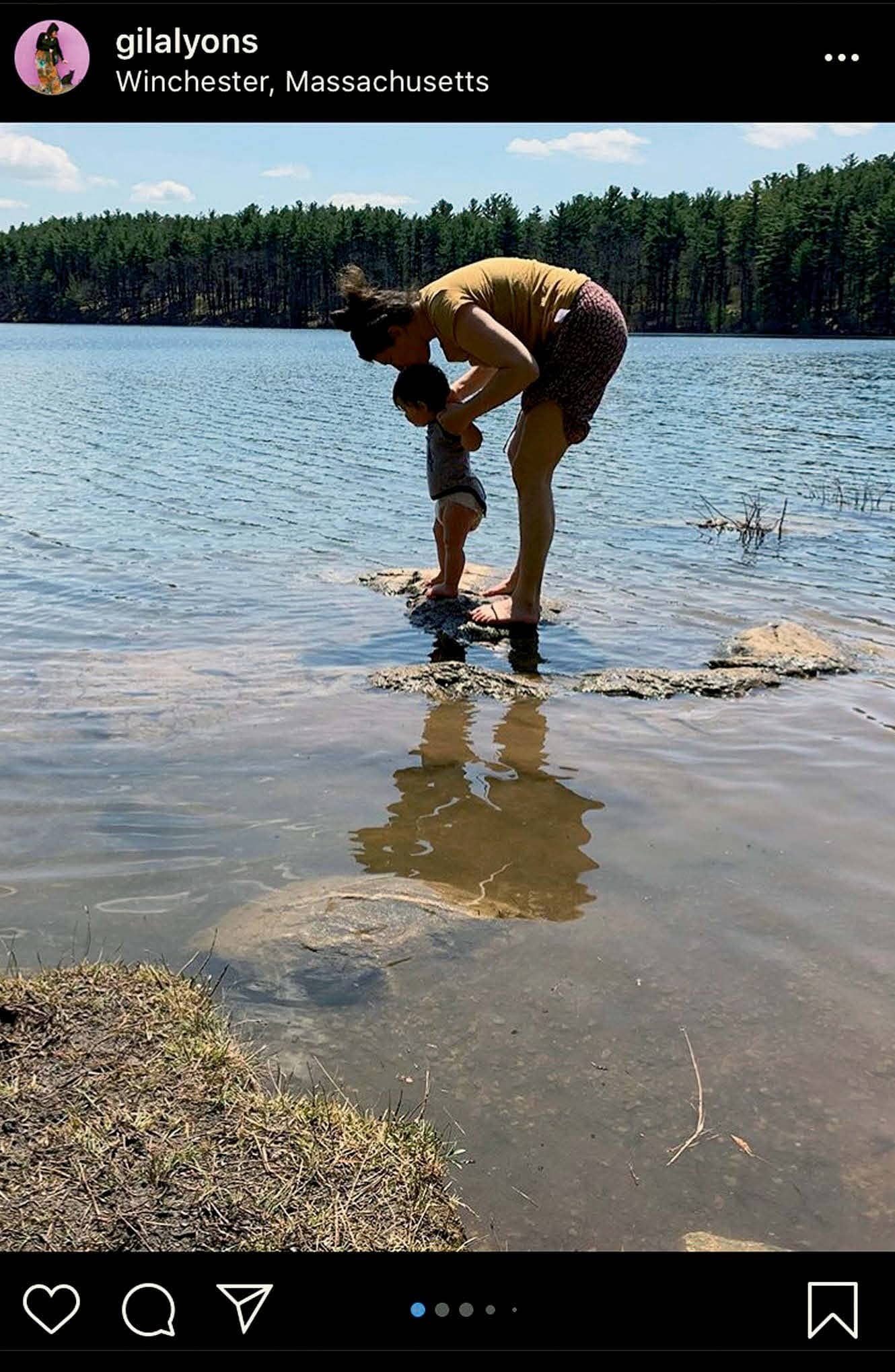 “I was nervous to leave the safe bubble of our home—the only environment we can control,” the author wrote on Instagram in May. “But walking my son into his first cool lake after a hot hike has been one of the greatest joys of my life.”

IT USED to be that after a writer felt the spark of inspiration, she refined her idea in a period of incubation and reflection. She sat alone wrestling with her mind, wrangling phrases and plotlines and insight out of a chaos of ideas until she had something coherent, meaningful, beautiful, evocative, or affecting to share. She edited her work, and then others did, before it went out to the public.

Now, almost as soon as an experience is had or insight f lickers half-grasped, the impulse is to post a photo on social media, particularly Instagram, with a mini-essay caption to make quick wisdom and insta-meaning in service of clicks, likes, followers, and a steady online presence applauded by agents and publishers. What once might have been given weeks or years to develop into an essay or book can now be shared after five to ten minutes of photo editing and punchy writing. An agonizing process of deep work in isolation can be eschewed by posting a musing, a question, a little zygote of an essay on social media; within minutes the writer receives praise, shares, reinterpretations, questions, and—significantly—the flood of dopamine that comes from the approval of colleagues, family, friends, and strangers.

Is this disruption from the solitary musing that has for so long characterized a writer’s life bad for literature, attention spans, and depth of inquiry, as some writers, such as Zadie Smith and Steve Almond, have argued? Or is this spontaneous, unedited expression a boon for the creative process, a further and inevitable evolution of literature as it has always grown and changed? And what of the platform it provides to writers who might not otherwise find one? Social media has democratized whose voices get heard, as young people, people of color, and writers in disabled and LGBTQ communities who may have been previously shut out of the traditional publishing world can now reach millions.

Bemoaning changes in our technology as being bad for literature, attention, and writing is nothing new. In a 2008 article for the Atlantic titled “Is Google Making Us Stupid?” writer and professor of sociology Nicholas Carr reminded us that people once feared that writing itself would destroy intelligence and erode critical thinking skills; Socrates lamented its weakening of memory and worried that reading engendered a false sense of mastery of information. Many hundreds of years later, in 1882, when Friedrich Nietzsche bought a typewriter to save him the migraines and muscle pains caused by writing by hand, one of his friends noticed his writing style had changed. “You are right,” Nietzsche wrote to his friend, “our writing equipment takes part in the forming of our thoughts.” According to Carr, media scholar Friedrich A. Kittler described that Nietzsche’s writing had changed from “arguments to aphorisms, from thoughts to puns, from rhetoric to telegram style.” Sounds familiar.