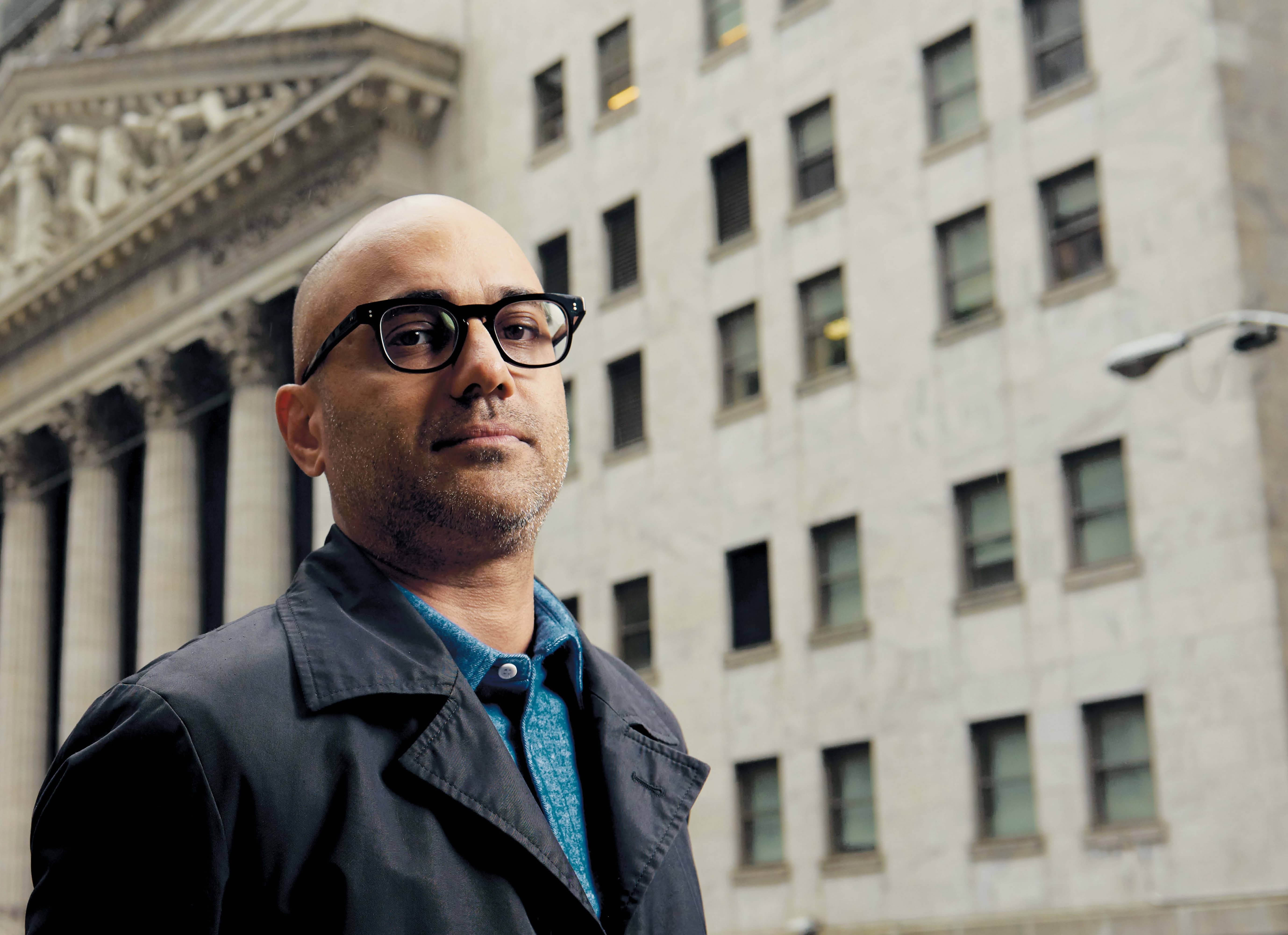 In homeland elegies, Pulitzer Prize-winning playwright and novelist Ayad Akhtar blurs the line between fact and fiction in an attempt to reclaim the novel: "I think that reality has outpaced the capacity for fiction to speak to us about what we have become."

AYAD Akhtar knows the truth is never simple. “The more I know, the more I see, the more lives I come in contact with, the more I understand that there is no single way of looking at anything,” he says. And there is perhaps no truth more fractured and contradictory than the truth about what it means to be an American, which is precisely what makes Akhtar’s new novel, Homeland Elegies, forthcoming in September from Little, Brown, such a haunting accomplishment.

Although the book is billed as a novel, it blurs the line between fact and fiction, told in first-person by a narrator, also named Ayad Akhtar, who, like the author, is raised in an upper-middle-class Midwestern town by Pakistani immigrant parents. The narrator grows up believing, thanks in part to his father, who for a time in the 1990s was Donald Trump’s doctor, that the United States is a place of prosperity and equity, where anyone can succeed if they work hard enough. But as the narrator’s career as a playwright and author begins to take off, 9/11, the war in Iraq, and eventually the election of Trump compound to reveal a darker series of truths about his homeland. As Akhtar and his family become the target of violence, microaggressions, and police brutality, he comes to see that equity for some is white supremacy for others, that prosperity for a small group of people means poverty and death for the majority of the population. Most powerfully, he comes to realize how easy it is to ignore these truths until you become a target of them yourself.

Akhtar has purposely remained mum about just how and where the details of his life overlap with those of his f ictional characters. For the reader this creates a potent tension that mirrors the uncertainty many of us are reckoning with on a daily basis, especially in this era of “fake news.” But one of the greatest triumphs of Homeland Elegies is how this uncertainty, rather than shutting you down, makes you want to know more, not just about the history of this country or the history of one’s ancestors, but about how your daily actions and decisions can serve humanity instead of feeding a destructive lie.

Akhtar is no stranger to writing about controversial truths; he has been tremendously successful doing exactly that. The author of four critically acclaimed plays, he is perhaps best known for his 2012 Pulitzer Prize– winning play, Disgraced, in which a successful Pakistani American lawyer who has distanced himself from his Muslim roots throws a dinner party with his wife, a white artist “inspired” by Islamic imagery, that escalates into an explosive argument about racism, religion, and assimilation. Akhtar’s first novel, American Dervish (Little, Brown, 2012), took a critical look at the cultural polarities that Muslim women in the United States are forced to choose between. It was published in more than twenty languages and declared a Best Book of the Year by O, the Oprah Magazine.

I spoke with A k htar, a couple months into the coronavirus pandemic, about the politics of writing, breathing life back into fiction, and the key to writing a successful play.

AMY GALL’s writing has appeared in Tin House, Vice, Glamour, and the anthology Mapping Queer Space(s) of Praxis and Pedagogy. Recycle, her book of collage and text coauthored with Sarah Gerard, was published by Pacific in 2018. She is currently working on a collection of linked essays about queer bodies and pleasure.

Amy Gall: This book was difficult to read. I can imagine how difficult it was to write.

Ayad Akhtar: It was hard, and it was also the easiest thing I’ve ever written. I wrote the entire book in eleven months, and it just poured out of me in a way I’d never experienced before. But, I will say, I dealt with a lot of weird physical stuff when I was writing it: weird conditions and nausea and just physical pain. It was that thing that Cynthia Ozick said: “Writing is the most toxic thing that I know.”

Gall: Did you feel a release both physically and emotionally after you stopped writing?

Akhtar: It’s so complicated. It was a very strange rhythm because I would write for two weeks, and then I would get exhausted and stop for two weeks. And my fiancé said to me, “You should really not try to rush this because (a) it doesn’t do you well when you overwork in this particular way, and (b) you’re going to really miss this feeling that you’re having of the flow.” Because I’d never really experienced the kind of flow I had when I was writing this book. And she was totally right. I did miss it. When it was over I felt relieved, but it was a very strange thing. The day I finished the part of the book where the narrator and his father are on a street corner-hugging goodbye was also the day my dad hit his head, ended up in the ICU, and died.

Gall: What do you think about the delineation between memoir and novel? Do you think there’s actual meaning to those categories for writers, or is it more about what audiences will allow in fiction that they don’t allow in memoir?