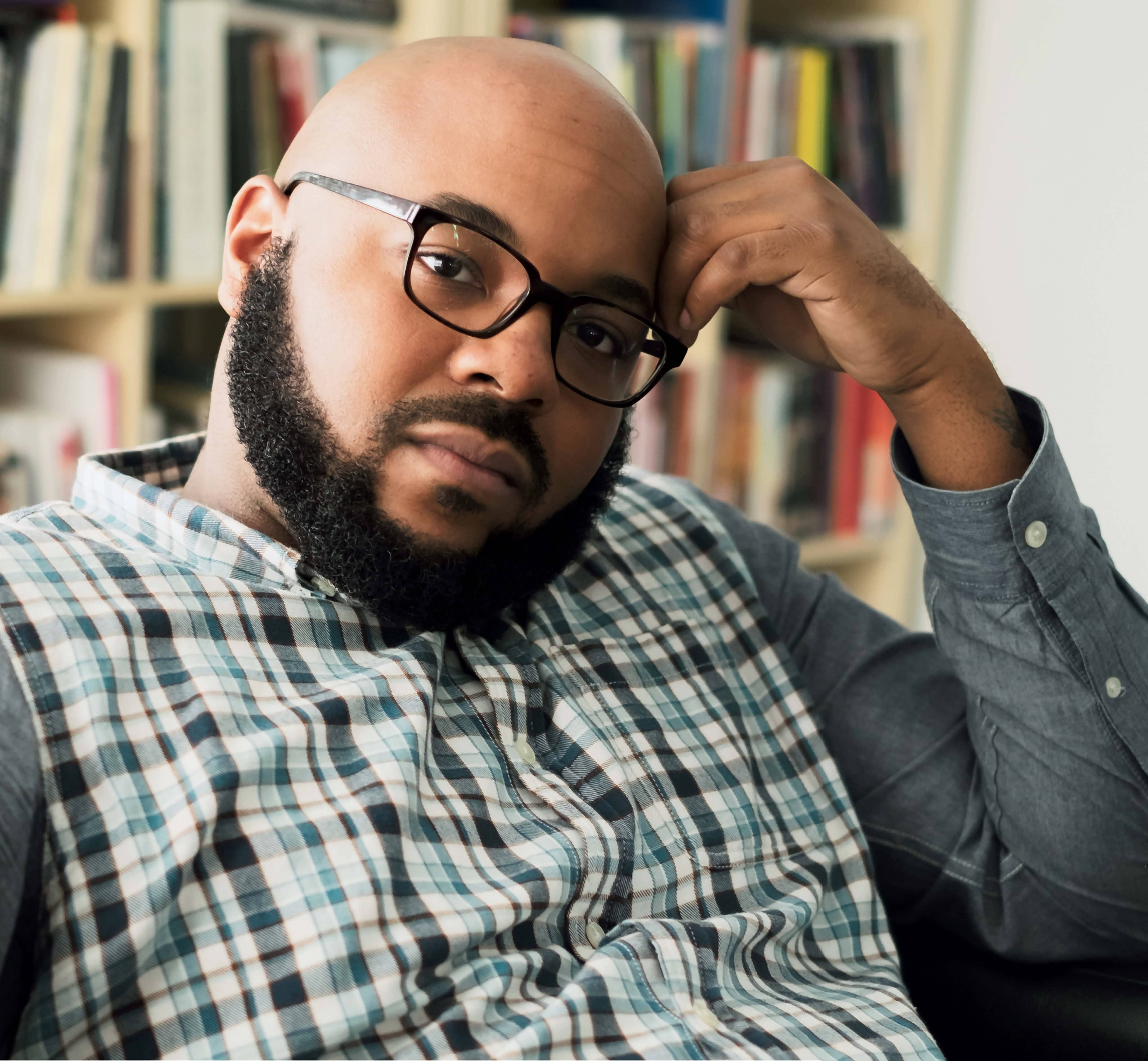 In his second collection, Finna, Nate Marshall explores the failures and triumphs of language, the power of community, and abolition as a poetic praxis.

Nate Marshall isn’t interested in being “once in a generation,” but he is a poet fiercely curious about both generations and generations. He is a poet I turn to when I’m looking for a long love song, propulsive and methodical. Like Chicago, the city we both love and will always call home, everything in Nate Marshall’s poems comes from love but isn’t interested in being romantic. We have things to reckon with, and a world to build with language that was generated in Black mouths drumming up from the American South, where our mutual mystery begins, to the cities that promised a place we could build, stay, love, mess up, fall, laugh, hurt and get hurt, transform, make and make again. “Nothing about our people is romantic / & it shouldn’t be,” Marshall writes in “the valley of its making,” a poem in his new collection, Finna, published in August by One World. I feel it in my very marrow, this collective power in a language we make and unmake with a love that, as he writes in “imagine,” is “a great idea / we keep having every day.”

Marshall’s first poetry collection, Wild Hundreds, was published by the University of Pittsburgh Press in 2015. He cocurates the BreakBeat Poets series for Haymarket Books and served as coeditor of The BreakBeat Poets: New American Poetry in the Age of Hip-Hop (2015). With Eve L. Ewing, Marshall co-wrote the play No Blue Memories: The Life of Gwendolyn Brooks, which was produced by Manual Cinema and commissioned by the Poetry Foundation. He also wrote the audio drama Bruh Rabbit & the Fantastic Telling of Remington Ellis, Esq., which was produced by Make-Believe Association. His last rap album, Grown, with his group Daily Lyrical Product, was released in 2015. He is an assistant professor of English at Colorado College in Colorado Springs.

Finna is a collection of poems, and finna is a word that means I am home, and I feel at home in these poems, by which I mean in each poem I am in a room where I can hold myself accountable to both what I am complicit in and what I want to build. I got to hold this book as helicopters chopped the air above my Minneapolis apartment, as Black folks marched for those the state has slain and in defense of a world we deserve but can’t yet fully see. I am grateful for this newest entry in Nate Marshall’s arc as a writer, grateful for possibility, for this Blackest language, our collective and percussive love.

Julian Randall: I wanted to start with “landless acknowledgment,” which is an absolute banger of a frontispiece to everything going on in this collection. I’m thinking of how land acknowledgments have become more common in spaces from one of our shared origin points: poetry performance and slam. As you head into the publication of your second collection of poems I’m wondering how consideration of performance and audience, this idea of “We,” has shifted for you since the publication of Wild Hundreds.

Nate Marshall: That’s a good question. I don’t know if I really had an idea of the audience when I was writing Wild Hundreds. I think, hypothetically speaking, yes. But I didn’t really at that point have to contend with the fact that people, particularly people outside of my immediate community, would be engaging with the work like that. The first book just feels like a miracle. Past that, you start, at least for me, saying,

JULIAN RANDALL is a queer Black poet from Chicago. A recipient of multiple fellowships as well as a Pushcart Prize, he holds an MFA in poetry from the University of Mississippi. He is the author of Refuse (University of Pittsburgh Press, 2018), which won the Cave Canem Poetry Prize and was a finalist for an NAACP Image Award, and the middle-grade novel Pilar Ramirez and the Prison of Zafa, forthcoming from Henry Holt in 2022. He can be found on Twitter, @JulianThePoet, and on his website, juliandavidrandall.com.

“OK, people are maybe listening now,” and I know that it’s no longer a dream or a hypothetical, and what do I want to do with that now? Who am I interested in talking to? Who am I not interested in talking to? I think it’s a thing that I thought a lot more about in Finna. In many ways Wild Hundreds was a book written to myself, and I think Finna is a little different. The tenor of it is thinking a little more about an audience that is now no longer hypothetical.

Randall: Word. Staying on the notion of audience in the time since Wild Hundreds dropped, you’ve put out a dope audio play retelling/remixing the tales of Brer Rabbit as the tales of Bruh Rabbit in Chicago. I’m wondering how working in audio drama as a form has shifted how you think about the speaker in your poems. I’m thinking about how Bruh Rabbit as the main character in the play is working through a kind of antihero status similar to the main speaker of these poems, what it is to be the protagonist and not be perfect either. Is there any correlation in how these figures in your work formed?

Marshall: In some ways, audio drama was kind of a really natural place for me to go as a writer. Because I come out of a performance lineage, both as a poet and an emcee, but also because I’m always thinking about how does a poem live in air. The thing I’ve been turning over in my head for the past couple of years is the idea of the poem as sheet music and not like the song itself. So the poem as rendered on the page is effectively the notation that you would use to approach the poem, but it is, in and of itself, perhaps not the whole thing. If I were to ask you, “Yo, play your favorite Beyoncé song,” you wouldn’t hand me the sheet music like, “You see this ish right here fam?!” You’d put on the song.

Randall: It’s kind of like a conversation you and I had once about what constitutes a “10” in a slam. It has to trouble something in the air; it’s gotta move the crowd for that poem to achieve that status. 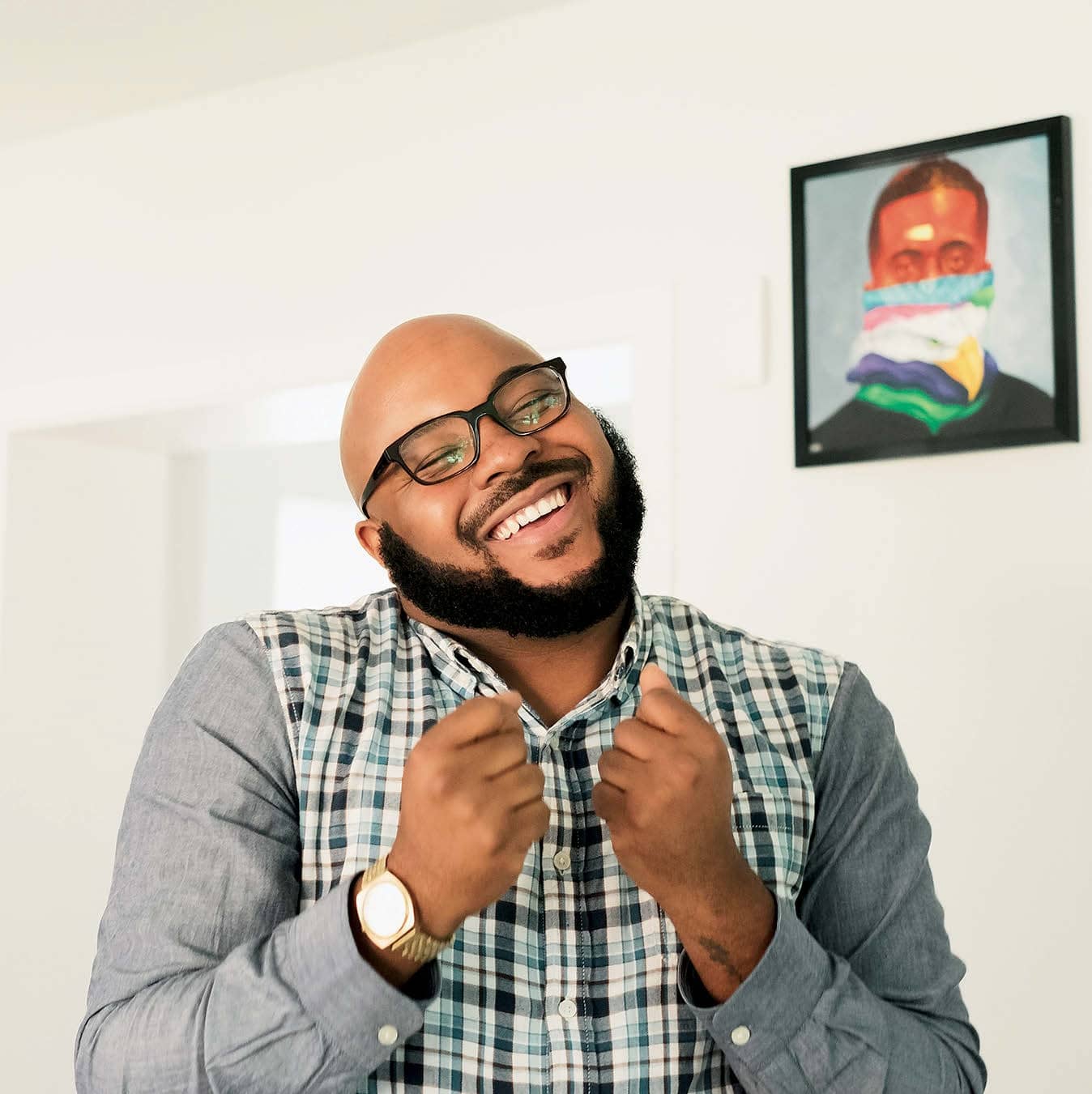