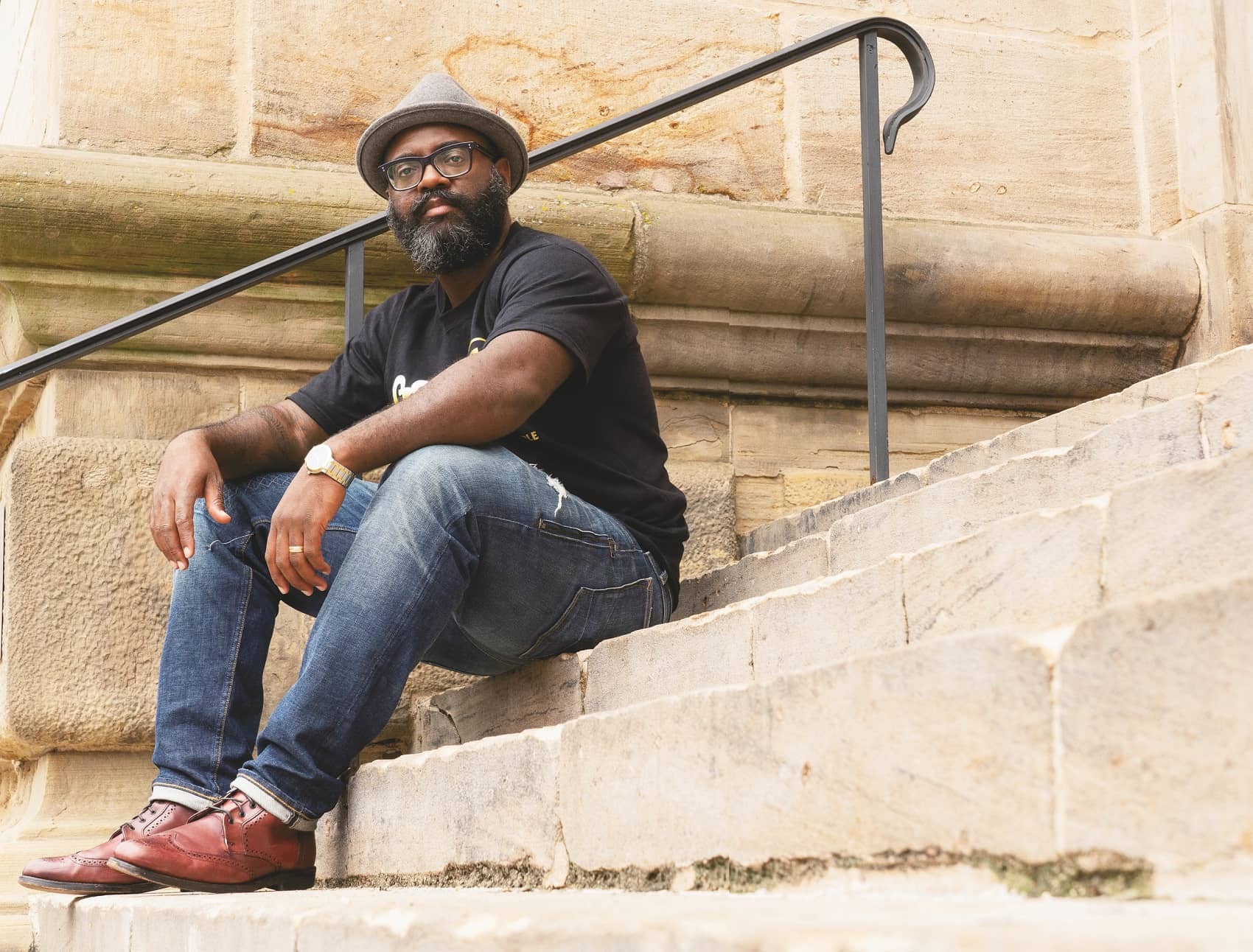 REGINALD Dwayne Betts is the author of A Question of Freedom: A Memoir of Learning, Survival, and Coming of Age in Prison (Avery, 2009) and three poetry collections, including Shahid Reads His Own Palm (Alice James Books, 2010), Bastards of the Reagan Era (Four Way Books, 2015), and, most recently, Felon, published in October by W. W. Norton. An exploration of love, fatherhood, and grace, the new book is also a testament to the trauma of years in prison as well as the challenges of life post-incarceration— subjects Betts knows well. Arrested and charged with three felonies in an armed carjacking when he was sixteen, Betts was tried as an adult and sentenced to nine years in prison. After his release he struggled to sidestep his record but went on to graduate from Prince George’s Community College in Largo, Maryland, and earn a bachelor’s degree from the University of Maryland in College Park and an MFA in poetry from Warren Wilson College in Swannanoa, North Carolina. In 2016 Betts graduated from Yale Law School, and a year later he passed the Connecticut bar exam and eventually was recommended for admission to the bar. He now lives in New Haven with his wife and two children; he is studying for his PhD in law at Yale.

We asked poet, author, and activist Mahogany L. Browne to visit Betts in New Haven as the publication date for Felon approached.

MAHOGANY L. BROWNE is a writer, organizer, and educator. The interim executive director of Urban Word NYC and the poetry coordinator at St. Francis College, Browne has received fellowships from Agnes Gund, AIR Serenbe, Cave Canem, Poets House, the Mellon Research Forum, and the Robert Rauschenberg Foundation. She is the author of Woke: A Young Poet’s Call to Justice, forthcoming from Roaring Brook Press in March 2020; Woke Baby and Black Girl Magic, both published by Roaring Brook Press in 2018; Kissing Caskets (YesYes Books, 2017); and Dear Twitter: Love Letters Hashed Out Online in 140 Characters or Less (Penmanship Books, 2010). She is also the founder of Woke Baby Book Fair, a nationwide diversity literature campaign. As an Art for Justice grantee, she is completing her first book of essays about mass incarceration and its effect on women and children. She lives in Brooklyn, New York.

What brought you to write your newest collection, Felon?

I’m getting letters from people in prison all the time. I’m working in a federal courthouse. I’m reading habeas corpus petitions. I’m reading about crimes that happened and the people who appeal. This shit is not just the face of incarceration as a nonviolent drug offender. This is nothing like people imagine incarceration is. And then it’s also, it’s subtle—it’s like, you getting deported because you got a drug beef. All of that bullshit is like, no—they’re deporting people right now who they’ve labeled criminals that shouldn’t get deported. I’m thinking about the language that we choose to use to justify how we treat certain people. And because I don’t want to get treated that way, I want to run from that language. But all that says is that I’m looking for some other kind of permission. I want to be a Yale Law graduate because that means you’ll give me a job—instead of being a convict, which means you won’t. I’m writing the book while I’m in law school. I’m writing the book while I’m being a father. I’m writing the book while I’m working as a public defender. So some of those poems happen because a kid that I was representing on a robbery beef, who probably did pull a pistol out and put it in somebody’s face, who probably did say it was a BB gun but ain’t nobody ever find it, and all the while I’m talking to his mom, and she says, “You know, Mr. Betts, I’ve never been around someone like you before. You know, you don’t curse.” And I’m thinking what the fuck? I curse and I got three felonies. Everybody you’ve been around is like me. It’s like a veil and then a mask and then a brown bag over my head. Because at this point, I can’t reveal all the many parts of myself.