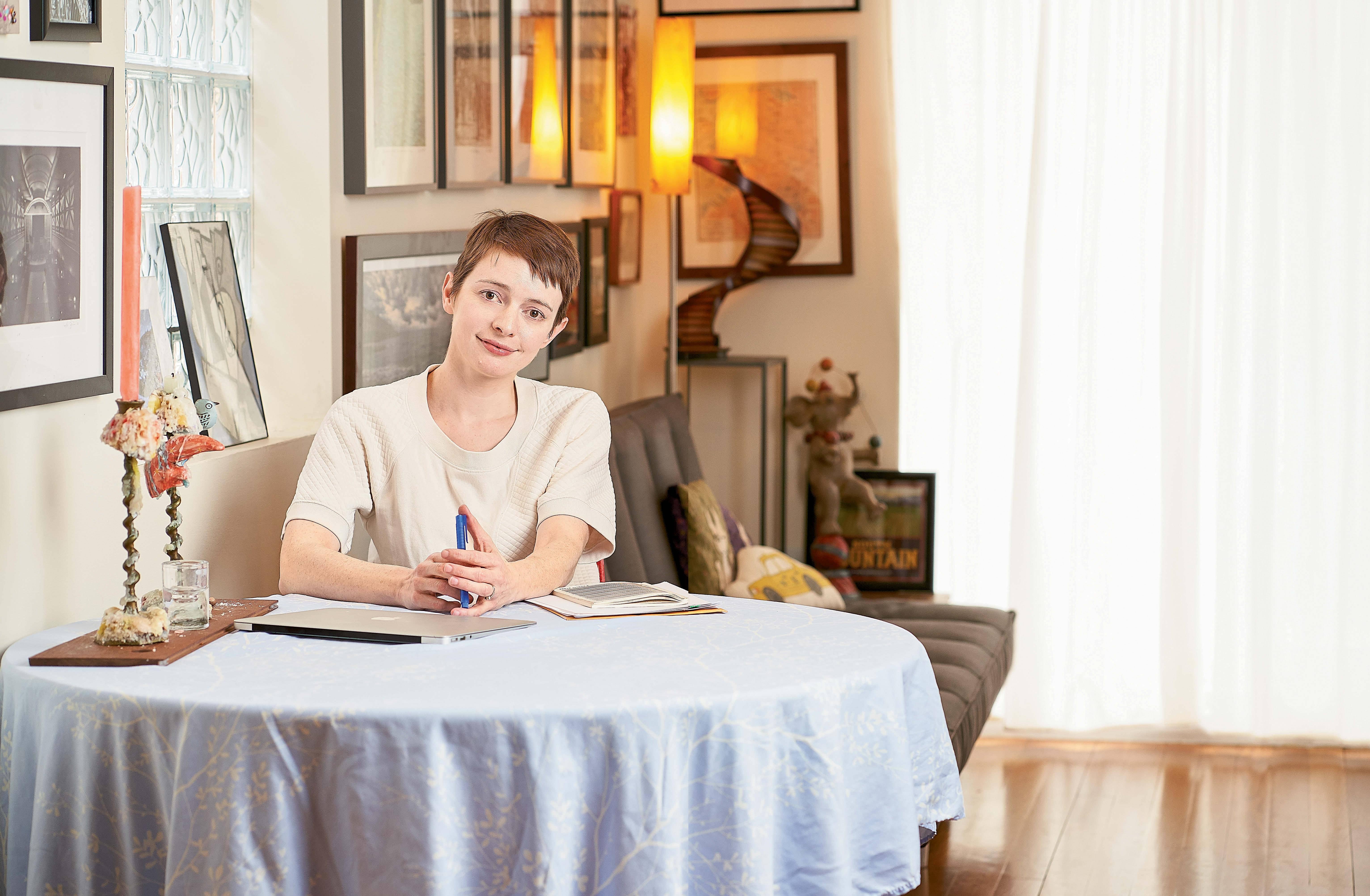 THE STORY OF EMILY ST. JOHN MANDEL’S DRAMATIC ASCENT TO THE BEST-SELLER LIST AFTER THE PUBLICATION OF HER FOURTH NOVEL, STATION ELEVEN, HOLDS VALUABLE LESSONS FOR WRITERS ABOUT HARD WORK AND PERSISTENCE. HER RESPONSE TO THE HIGH EXPECTATIONS FOR HER FOLLOW-UP, THE GLASS HOTEL, MAY BE EVEN MORE INSTRUCTIVE.

IN THE winter of 2002 a young woman from a small island off Canada’s western coast was working in the basement warehouse of a home-furnishings store in Montreal. She had moved to Montreal with her boyfriend, but when that relationship ended, she found herself alone in a city where she knew essentially no one and wasn’t fluent in the prevailing language, French. Every morning she met a delivery truck outside the warehouse at seven o’clock and spent the next six or seven hours laboriously slapping price tags on martini glasses and arranging vases on shelves.

The job had one virtue, though: It ended early in the afternoon, leaving her the rest of the day to write. And write she did, quietly, steadily, showing her work to almost no one. Soon she moved to Brooklyn, New York, and kept writing for seven more years until her first novel found a home with an indie press in Colorado. Five years after that, her fourth novel, Station Eleven (Knopf, 2014), became a breakout hit, a National Book Award finalist that has sold more than 1.5 million copies worldwide.

The young woman meeting the delivery truck at the warehouse on those cold winter mornings eighteen years ago was Emily St. John Mandel, but she could just as easily be a character in an Emily St. John Mandel novel. The figure of the rootless young woman with few worldly possessions beyond a fierce intelligence and a certain relentlessness crops up again and again in Mandel’s fiction. In Last Night in Montreal (Unbridled Books, 2009), her first novel, her name is Lilia. In her third novel, The Lola Quartet (Unbridled Books, 2012), her name is Sasha. In Station Eleven she appears twice, once in the guise of Miranda, the secretary/businesswoman who draws a limited-edition graphic novel about a damaged space station called Station Eleven, and again in the figure of Kirsten, an actress who carries Miranda’s graphic novel with her long after a pandemic flu has wiped out 99 percent of the world’s population.

“There is sort of a recurring character with different names, this extremely self-possessed, undereducated person,” Mandel admits with a laugh. “There’s absolutely an element of autobiography there.”

In March readers will have a chance to meet the latest iteration of the Mandel heroine, this time named Vincent, the central figure of Mandel’s new novel, The Glass Hotel. Like so many of Mandel’s female characters, Vincent is a nobody from nowhere, but like her fictional forebears she is also smart and highly resourceful, and over the course of the novel she clears a place for herself in the world through an act of quiet audacity— in Vincent’s case by signing on to be the arm-candy companion to a corrupt New York City financier based on disgraced Ponzi schemer Bernie Madoff.

On the bleak November day when we sit down to discuss The Glass Hotel, Mandel doesn’t seem like the plucky heroine from a novel. She seems like a Brooklyn mom with a lot on her plate. Mandel and her husband, Kevin, also a writer, are midway through a gut renovation of their white-brick South Park Slope home and for now are camped out on the unrenovated second floor surrounded by books and toys belonging to their three-year-old, Cassia. Mandel has recently returned from the second of two trips to Los Angeles, where she helped block out the first season of a planned television series of The Glass Hotel, and soon she will be on the road again doing events for Station Eleven, which is still selling briskly six years after its publication.

But for today she is sitting at her cluttered kitchen table, sometimes half-shouting to be heard over the clatter of hammers and the whine of power drills. In conversation, Mandel’s style of speaking is like the flight of a bird—she pauses briefly to consider each question before diving in to answer with a few finely sculpted sentences. When she finishes, she nods once, then twice, as if to make sure the message has been delivered.

Mandel has gotten pretty good at talking about herself—an ability born of necessity. In 2014, when Station Eleven came out, her publisher sent her on a modest five-city book tour. Then the novel was named a finalist for a National Book Award and the tour expanded to seventeen cities. The National Book Award went to Phil Klay’s Redeployment (Penguin Press), but Station Eleven kept selling and the tour kept adding new cities so that now, years later, Mandel has attended more than two hundred events in seven countries.

“It was like stepping through the looking glass,” she says about the experience. “It was totally surreal. For my first three books, I toured for them, but they were short tours in really budget hotels. I did events for those first three books where three people showed up. I did one event where three people showed up, but not at the same time. People just wandered in and out while I was talking. I did an event where nobody showed up.”

Mandel, the second of five children in a working-class family, kept her day job as an administrative assistant at New York’s Rockefeller University nearly a year into her endless book tour for Station Eleven, answering work e-mails at a book festival in Australia and booking plane travel for her boss from a hotel in London. She only quit when she learned she was pregnant and decided that she couldn’t write books, travel around the world on tour, hold down a job, and raise a child all at the same time.

AS A kid growing up on Denman Island, a sparsely populated speck of farmland and forest a short ferry ride from Canada’s Vancouver Island, Mandel was home-schooled by her parents. She attended high school for a time in her teens but dropped out one math course short of graduation. She took some classes at a local community college and studied dance at a conservatory in Toronto, but to this day Mandel doesn’t possess a single diploma from an academic institution—not high school, not college, and certainly not an MFA.