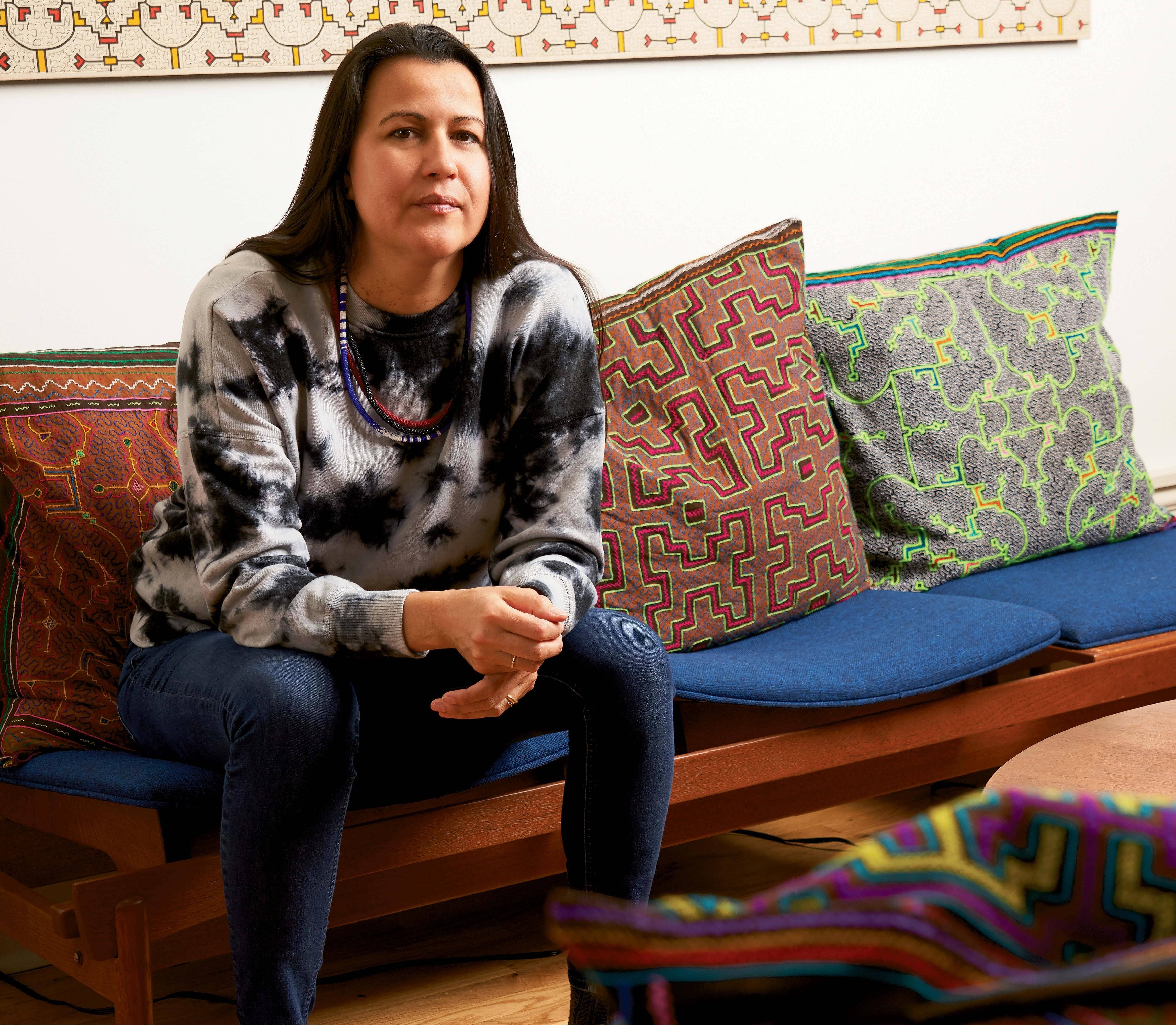 “WE ARE ALIVE BECAUSE OF STORY. IT IS ONE OF OUR ANCESTORS’ MOST POWERFUL TECHNOLOGIES. AND WE ARE ALL STORYTELLERS. A STORY IS AN ENERGY, AND LIKE THE WALLS OF JERICHO, MAYBE IF WE PUT ENOUGH OF OUR STORIES OUT THERE, INTO THE AIR, THE WALLS WILL START FALLING; THEY ARE ALREADY CRACKING.” —NATALIE DIAZ, WHOSE NEW BOOK, POSTCOLONIAL LOVE POEM, WILL BE OUT IN MARCH FROM GRAYWOLF PRESS.

I CAN’T remember the first time I met Natalie Diaz. Maybe that’s because she has always felt like family, someone I have always known. Someone who has always been a part of me—of all of us. To hear her speak of our connections to ancestors, the land, water, the self is to be at once moved and awakened. She is thoughtful and connected. She is Indigenous, Latinx, queer. She is brilliant both on and off the page. So many of us knew this long before the MacArthur Foundation awarded her a “Genius” Fellowship in 2018. She is a woman fiercely allied to people, to animals and to the land, to the past and to the present, to poetry and to activism. To sit with her is to become aware of both how much I know about the world and myself and how much I don’t. To sit with her is to understand the depth and strength of our words, the magnitude of our voices against a country and history that has too often tried to erase us.

Diaz was born on the Fort Mojave Indian reservation in Needles, California, the daughter of a Mexican Spanish father and a Fort Mojave Akimel O’odham mother. She is a member of the Gila River Indian Community. While she is currently the Maxine and Jonathan Marshall Chair in Modern and Contemporary Poetry at Arizona State University, as a child she could have scarcely imagined herself a poet. Basketball, the dream ticket off the reservation, took Diaz to Old Dominion University. There, when not playing on the team, she played hoops with the poet Tim Seibles, who encouraged Diaz to write while she was recovering from an injury. And while a professional basketball career took her abroad, to Turkey, Austria, Sweden, Spain, and Portugal, she returned home to start a language revitalization program with her elders at Fort Mojave.

There is a deep kindness to Diaz, a generosity, quietude, and patience that I, as a child, having first been introduced to poetry through the words of Langston Hughes (“I loved my friend. / He went away from me.”) and Robert Frost (“The woods are lovely, dark and deep, / but I have promises to keep…”), thought existed in all poets. I then grew to learn this wasn’t so. Of her powerful, painful, and deeply loving first book, When My Brother Was an Aztec, published by Copper Canyon Press in 2012, Diaz said, “As I was writing, I realized I’d been writing toward [my brother].” With mythology as the backdrop for exploring the impact of a brother’s drug addiction on not just one family, but on all of us, Diaz explores the thin lines between love and pathos, empathy and rage, living and dying. Her new collection, Postcolonial Love Poem, published by Graywolf Press in March, continues the narrative of love, this time with an eye on not only the lover, but on what she has always been: an activist, with a gaze bent on our survival.

In an earlier interview I heard you say, “There’s more truth in myth than there is in truth.” Can you go deep for me on this? I’m interested in how you’ve seen this play out in the world and how it has been explored in your work.

Back home my elders might say, “Yeah, so you know something—now what?” Truth can be lazy because it becomes satisfied with itself, and it is often so tethered to time and space that to demand one truth can often invisibilize another’s truth. When and where does truth begin, and whose truth is it? What truths do Americans know about Natives or Indigenous peoples? Whereas myth is where I was taught I came from—the Mojave creation myth is what teachers used to call it before they slipped into a history chapter on hunters and gatherers or battles or feasts. Truth is what turns Natives into footnotes in most American scholarship and stories of victory or suffering.

The American deployment of mythology has been a strategic tool: America prefers I not imagine against the state and banks on convincing me that what I need can’t be attained because I am not real. I am a myth in the American imagination. How often do you see a contemporary representation of Natives expressing strength and power and desire? If I believe what the state, what America, has told me about myself, then I would believe I am not capable or deserving of what I need. Simple things, like love, like joy and pleasure. America tried to make us believe we were myths by putting us on reservations, which were extermination camps—but I am stronger than the myth. And I was made there: on a desert rez, on leftover land the government didn’t want, next to a river they are still trying to bleed empty. I learned to fight and love and desire and dream there. I learned quickly that myth is what makes me dangerous—the ability to make a rock weep for its creator, a way to say the river runs through my body, a way to say you are my eye. When America says myth, they mean we’re unpinnable, and out of time, from before the beginning. To be before the beginning is a threat to the state.

Truth, on the other hand, is a thing to question—truth was how America was made and continues to make itself, and nobody can trust that. In myth I learn to live in tension, to be malleable and possible. And on the page I build a practice that I can carry into my every hour and every day of my own mythmaking. On the page—the way it once happened on a basketball court— I am learning and relearning how to make America a part of my personal mythology, which feels more possible than truth.

I often feel of many worlds in my life, having been raised with so many conflicting realities: Christian and Muslim, Southern and Northern, middle class and “underprivileged.” Tell me about your many worlds.