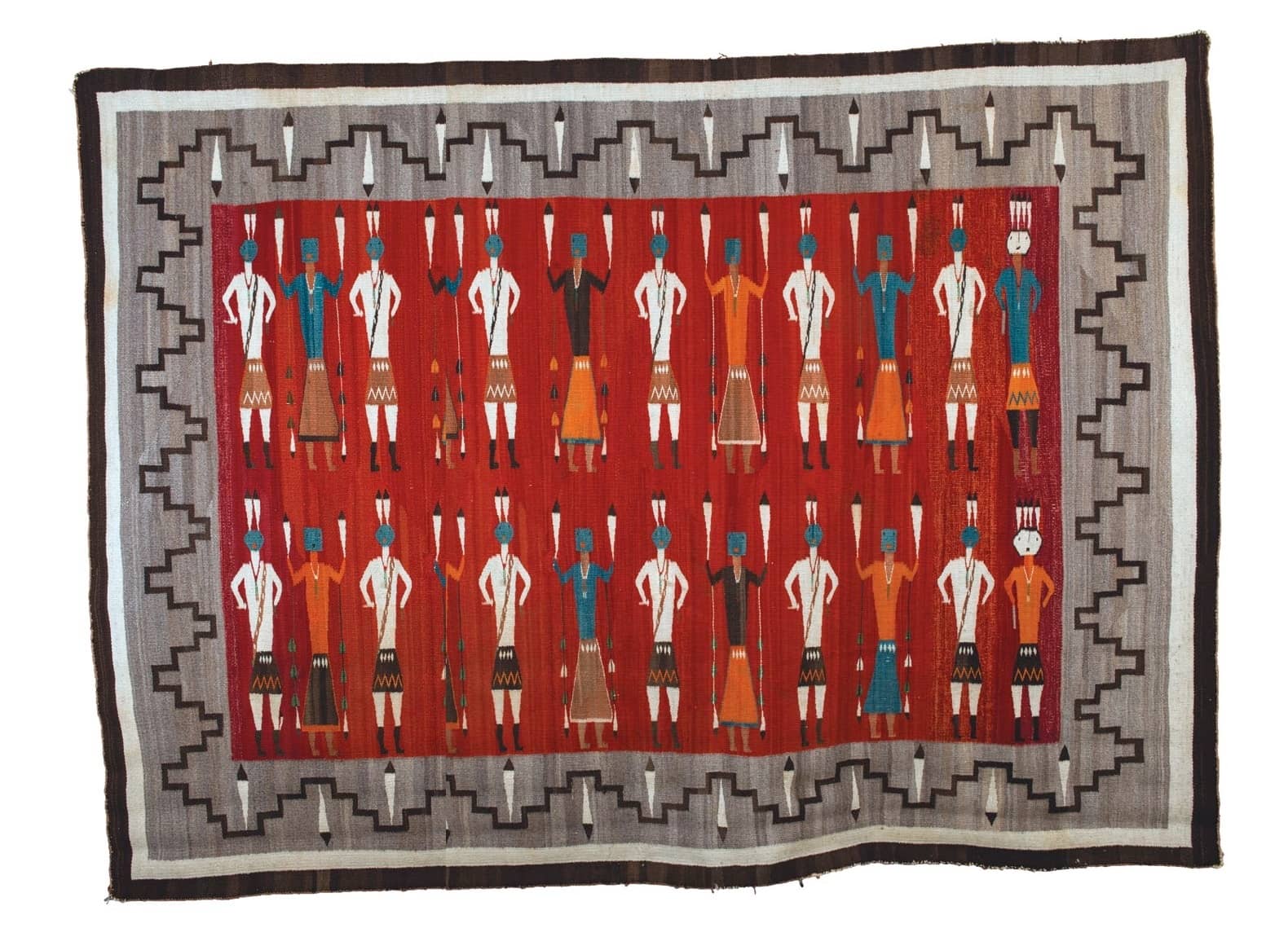 A look at the origins and early historical development of these secular Navajo weavings and their ceremonial themes.

Yeibichai weavings constitute a small but highly collectible category of Navajo textiles. These weavings evoke scenes from the ninth and final night of the Nightway healing ceremony during which a succession of teams of masked dancers appear, impersonating male and female Yeis. In executing the carefully prescribed ritual dance movements, they call upon the Holy People to bestow good health on the patient and, by extension, on all those hundreds in attendance.

The Yeibichai dance is performed in front of a ceremonial hogan that has been built in a remote location near the patient’s home. At some distance away is a brush enclosure where the dancers don the sacred masks which have been ritually prepared by the medicine man. The ceremonially attired dance teams enter the firelit area in front of the hogan led by Talking God or Yeibichai, the grandfather of the Yeis, who carries his sacred Abert squirrel bag. He is followed by six male and six female Yeis. The last participant is Water Sprinkler, who provides an element of comic relief by shaking a tattered fox pelt at the spectators.

In the 19th century, a Yeibichai dance team would consist entirely of men. The role of the female Yeis was assigned to teenage boys or young men of smaller stature who would let their down their hair and wear the appropriate rectangular female Yei masks, all the while dancing in their traditional male kilts. However, if there were not enough qualified younger men, one or more mature women might be invited to perform the female Yei roles. Today Yeibichai dance teams generally are made up of six men and six women.

To appreciate the origin of Yeibichai weavings, we need to step briefly back in history. At the time of the entrada into the Southwest, Spanish settlers observed that the Pueblo tribes had large numbers of seasonal ceremonial dances which were performed openly in the plazas of their adobe villages. The Navajo, by contrast, were a nomadic people who conducted their ceremonies in remote locations. Early ethnographers, in their ignorance, concluded that the Navajo had no religious practices.

The first person to observe and write about Navajo beliefs and ceremonies was Washington Matthews, a surgeon in the United States Army who was stationed at Fort Wingate near Gallup, New Mexico. His essay, The Mountain Chant (1887), was published in an annual report of the US Bureau of Ethnography and went relatively unnoticed. It was not until the publication of his book Navaho Legends (Houghton Mifflin, 1897) and more importantly his illustrated study of The Night Chant (Knickerbocker, 1902), that the broader American public became aware of the existence of Navajo healing rites and their corresponding sandpaintings.

This new awareness coincided with the “Indian Craze” which had emerged as an indirect result of the grandiose World Fairs held in Chicago in 1893 (400th anniversary of Columbus’ discovery of the New World) and Saint Louis in 1904 (100th anniversary of the Louisiana Purchase) with their popular Native American exhibits. Americans began creating “Indian Rooms” in their homes to display their growing collections of Plains artifacts, Hopi katsina dolls, Pueblo pottery, Apache basketry, and Navajo rugs.