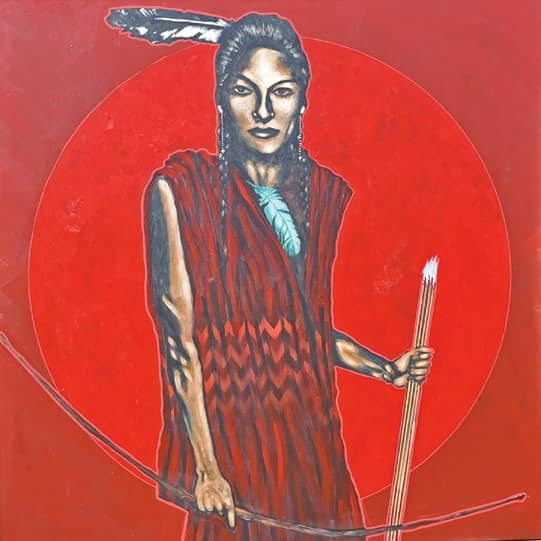 Artists Nocona Burgess and Greyshoes (Upton S. Ethelbah Jr.) have been friends for more than two decades, but have never exhibited in a two-man show before.

Artists Nocona Burgess and Greyshoes (Upton S. Ethelbah Jr.) have been friends for more than two decades, but have never exhibited in a two-man show before. That is, until now. April 10 through May 3, Manitou Galleries in Santa Fe, New Mexico, will pair Burgess’ paintings with Greyshoes’ sculptures in a dynamic display of bold colors, solid designs and forms, and stories of Native American heritages.

Burgess, whose portrait-style paintings are immediately recognizable for their colors and contemporary compositions, will have around a dozen pieces in the show. The works are inspired by his careful research and passion for sharing the story of each person depicted—both past and present.

One of his pieces in the exhibition is Two Hatchet – Medicine Rattle, a painting of Two Hatchet of the Kiowa tribe. Burgess, who is Comanche and Kiowa, has silhouetted the man against a bright blue background. The figure itself is also done in blue values, while the blanket over his shoulders is red, and holds rattles and feathers in his hands. “I try to think about the way the people dress.