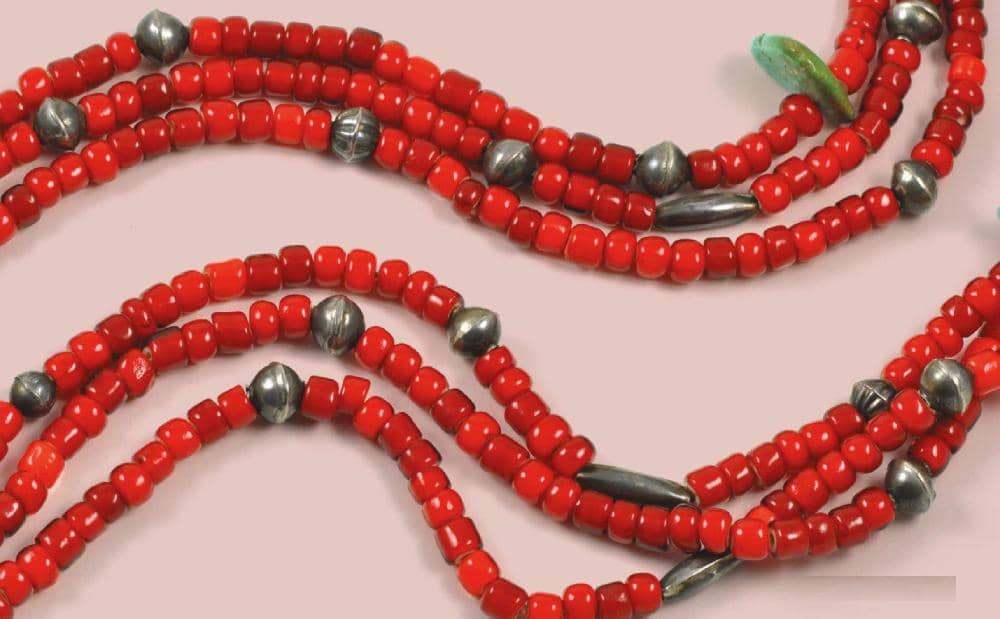 The introduction of glass trade beads in Native North America made way for new horizons in bead-making.

From the Atlantic seaboard to the Aleutian Islands, European glass trade beads were a potent cross-cultural currency. European explorers, missionaries, fur trappers, traders and colonists brought strings of these beads with them as they lay claim to the bounty of the North American continent. When bartering with the many Native peoples of the New World, beads were a more than successful substitute for coinage and paper notes. Glass beads also proved to be advantageous for gift-giving purposes as well.

Glass beads have a long history. The glass-making process began 3,500 years ago in ancient Egypt and Mesopotamia. Under the Romans, improvements such as glass blowing pipes spread an active bead trade to the most remote regions of the Empire well up to 400 CE. Glass bead adornment disappeared during the more austere Christian era in Europe until it was revived by the Venetian Republic. In the late 15th century, glass makers on Murano Island restored Roman techniques and created cylindrical hollow glass canes. The first results, called Millefiori beads, eventually became prime candidates for trade to Africa and North America in the 16th century. By the start of the 1800s, Millefiori beads had multilayered wound mosaic stripes or flowers from glass canes molded and cut onto a solid colored core.

Other countries renewed the production of beads in this time period, stimulated by explorations to the New World. The old Kingdom of Bohemia (later Czechoslovakia) established its own beads, and these creations vied with Venice for popularity. Spain, eager to pursue conquests and trade in the Americas, also created glass factories, as did France, Holland and Sweden. European countries possessing the essential natural resources for glass, such as potash, quartz and sand, cultivated glassmaking. After the glass bead mold was devised in the early 1800s, production costs lowered, and more varied bead colors and designs could be turned out.

Glass was a material unknown to Native Americans. The Native peoples of North America made and traded beads created from natural materials: bone, shell, stone and clay. Shaping these beads was a laborious process, and these objects were essentially fragile. The new imported glass beads were a most desirable commodity. They possessed a fine beauty in their shapes and colors—and they were highly durable compared to those formed by hand. Glass beads came in round, tubular and ovate shapes in various sizes. Some beads were made in a single color while others had multiple hues.