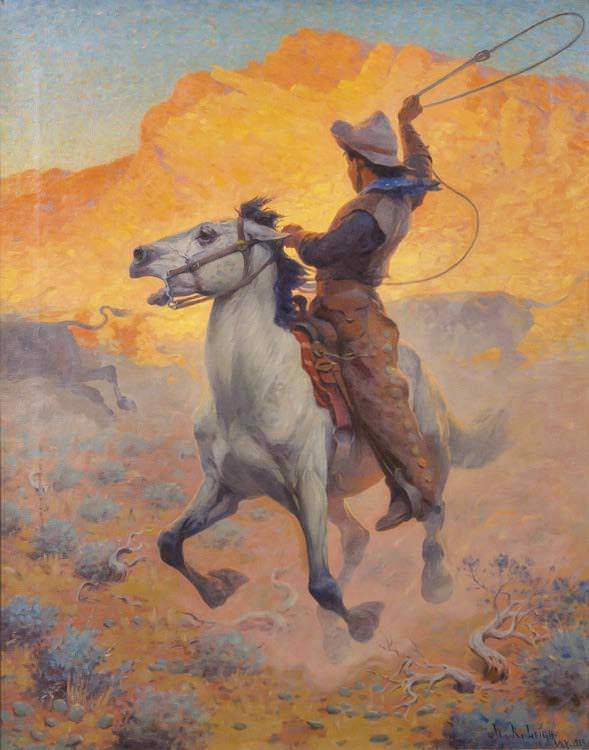 Provenance packs a punch, especially when discussing artwork being offered up by an institution. Not only do collectors know the items in question were probably handled and cared for properly, said artwork has a documented past.

These attributes added to the appeal of numerous lots sold out of the Denver salesroom of Leslie Hindman Auctioneers during the two-day arts of the American West auction, November 5 and 6, 2017. Because of expansion, a museum in the Midwest was selling, and collectors wanting to gain access to these artworks that had been out of circulation bid aggressively.

The Roper by William Robinson Leigh (1866- 1955) exemplifies this. Purchased in the late 1930s by J.W. Dixon of Oklahoma, the oil on canvas had descended in the family until it was sold at Sotheby’s in New York City in December 1988 to Gerald J. Cooper. It was then acquired directly from Cooper by the Peter M. Wege collection in 2006 and was gifted to the museum, which then offered it at this sale. Dated 1913, The Roper came to auction with a $100,000/150,000 estimate and sold to a private collector for $281,000 (includes buyer’s premium).

“The work of William Robinson Leigh is very on trend right now,” said Maron Hindman, managing director of Leslie Hindman Auctioneers’ Denver offices. “The Roper was a perfect choice for the sale’s catalog cover, and we were so excited about how well it did—how the whole auction went.”