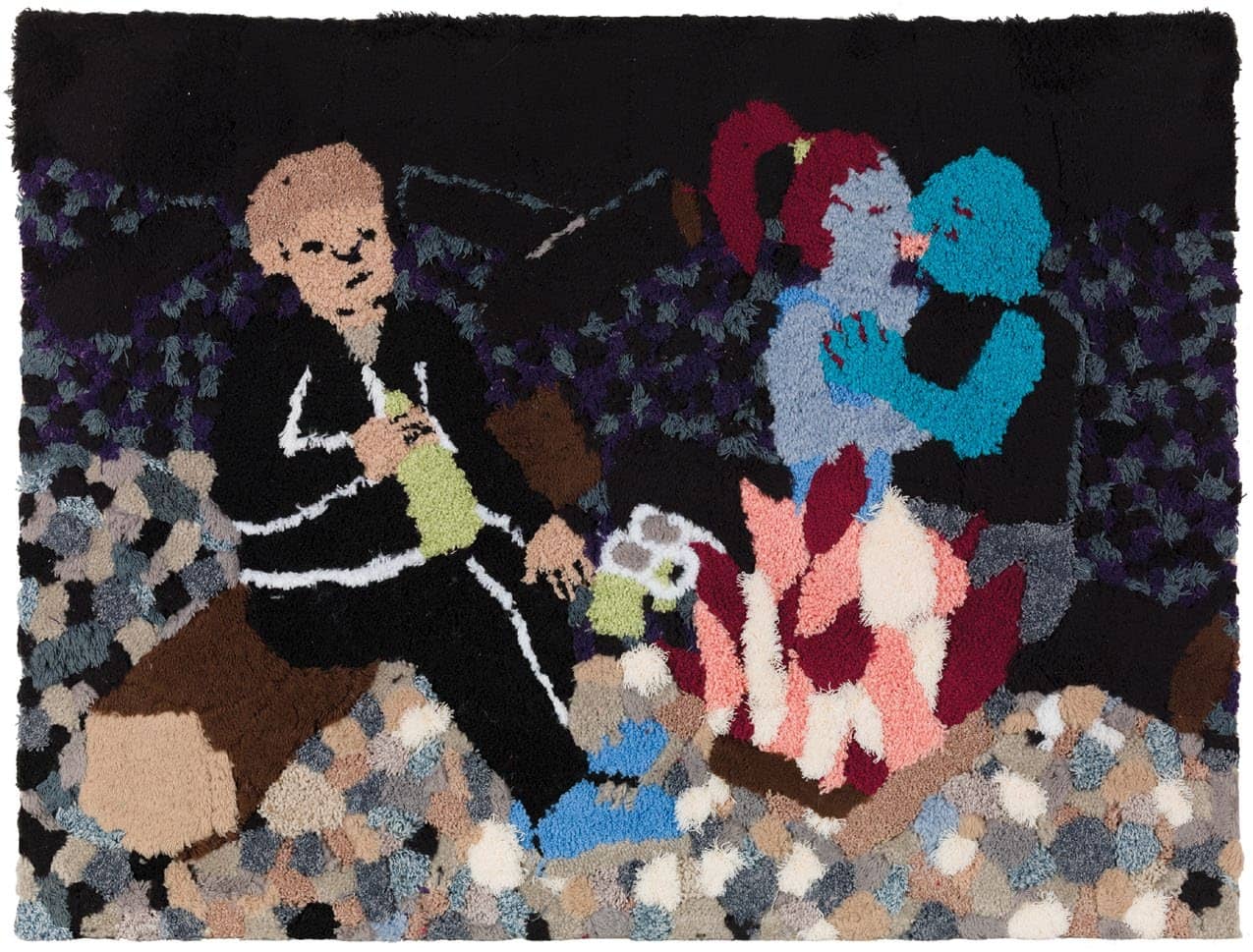 Collage and Comics at Chicago MCA

Comic genius Jessica Campbell’s largest show of collaged carpet works, with immersive installations and curious connotations, is currently dropping jaws at Chicago’s Museum of Contemporary Art. These shaggy artworks are soaked in mashed-up stories best revealed by the artist herself.

Kristin Farr: Tell me about your show at the MCA.

Jessica Campbell: There are two gallery spaces: in the first, there is a large mural made out of carpet. The form of this mural is based off of Giotto’s Scrovegni Chapel, an early fourteenth-century church in Padua, Italy that chronicles the life of Jesus through a series of narrative panels. The major difference between this installation and the Scrovegni Chapel, aside from the material choice, is that the Chapel was meant to act as a mnemonic device for worshipers; it depicts a known story. The narrative I’ve used in my installation is an irreconcilable hybrid of my own biography and that of Emily Carr.

Emily Carr was an early twentieth-century modernist painter from Victoria, BC in Canada, where I also grew up. She is the most famous artist from my hometown and her work is extremely ubiquitous there. She was affiliated with the Group of Seven—a group of landscape painters whose work was central in the construction of Canadian national identity—but her work differed from theirs in a few significant ways: she painted the west coast, where they predominantly painted Ontario; she was twenty or so years older than the other members; she was a woman; and, significantly, much of her work included indigenous cultural production, like totem poles, in addition to landscape. In many ways, she revered indigenous culture, art, and design, but she also had a very paternalistic and colonial attitude.

I wanted to engage her life and work as my subject because it’s something that feels very closely intertwined with my own life, and her work feels symbolic of the Pacific Northwest, which is a place I feel deeply homesick for, while I also find many aspects of her life and work problematic.

The Carr Chapel installation very directly references my biographies and hers. The second room features a series of drawings and a large carpet. The carpet reproduces nude artworks that appeared in an exhibition at the Art Institute of Chicago in 1933 entitled A Century of Progress, which was a component of the World’s Fair of that year. Emily Carr came to Chicago only once, the last major trip of her life, specifically to see this show. However, she miscalculated and arrived the day after the exhibition closed. That disappointment, combined with her own status as a woman painter, under-recognized in her lifetime, and a Victorian prude who would not paint from nude models, was something I wanted to ruminate on. The drawings reproduce her diary cartoons that were never published.

Is The Welcome Man based on personal experience? Something similar happened to me as a kid.