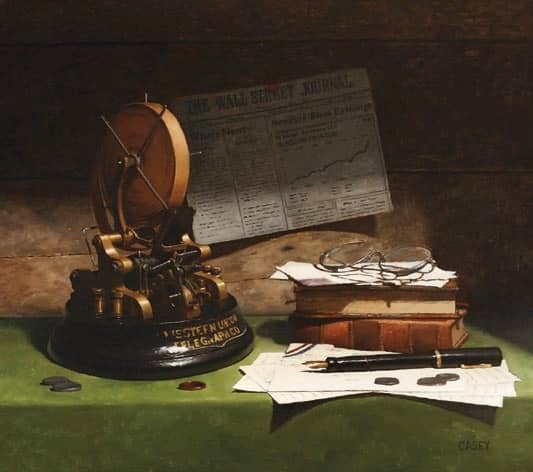 In building a statue, a sculptor doesn’t keep adding clay to his subject. Actually, he keeps chiseling away at the nonessentials until the truth of his creation is revealed without obstruction — Bruce Lee

Representational painting is like a magical performance in which the artist fools the viewer’s perception by creating a threedimensional illusion on a two-dimensional surface. It’s a lot like sculpting. In fact, in the academic tradition sculpture was intertwined with painting and the two were often taught together.

If you don’t think like a sculptor, your paintings may appear flat. When painting, you’ve got to feel as if you’re sculpting—pushing things back in space and pulling them forward into the light until they seem to be coming up off the surface. 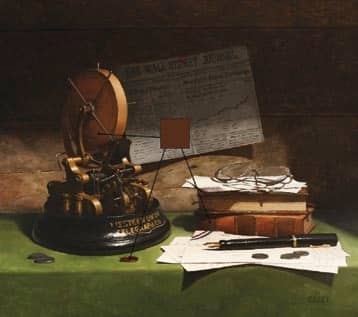 In this painting I used the same color—of the same value—on a portion of the ticker tape, a part of the book’s spine and the copper penny. But you’d never guess this just by looking at the painting. The square of color in the image at right reveals that the three apparently very different areas have the same value and hue.

Rendering the light and dark values of an observed object in an order that gives the appearance of volume is referred to as modeling form. In modeling form, we are combining all the concepts of light, drawing, value and color to achieve form.

Every color relates to a value. It’s often said that color gets all the attention but value does all the work. Indeed, accurate value structure and accurate drawing are the two most important aspects of a successful painting. If you nail these, you are well on your way to making a good painting. If your value structure works, you can get away with not having the color be super accurate. 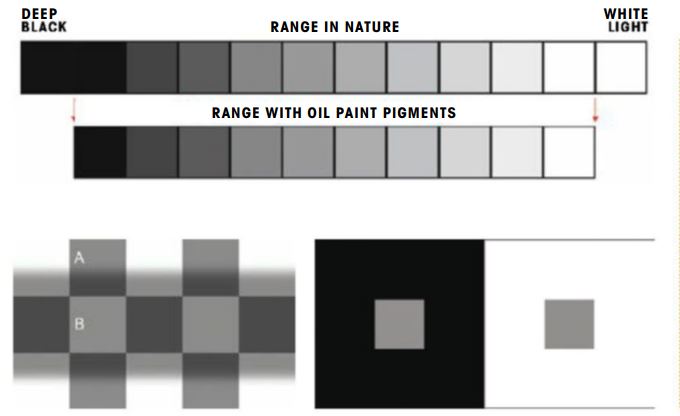 In painting, we are always interpreting what we see and can never truly reproduce nature. For instance, our eyes can see many more variations in value than we could possibly reproduce with paint. This forces us to compress our range of values and to render form very subtly to overcome the limitations of our materials.

It’s very hard for our brains to judge values accurately. In a sense, our brains just fail us. In psychology, this brain failure is known as the simultaneous contrast effect. Our brains don’t gauge values accurately because what any value is surrounded by affects our perception greatly. For this reason, we have to be cautious when copying values optically. We must slowly grab bits of information to help us overcome these brain failures.

It’s likewise very hard to judge the value of a color accurately; again, we’re often misled by the context. The same color can appear to have different values (and also different hues) depending on what it is surrounded by. 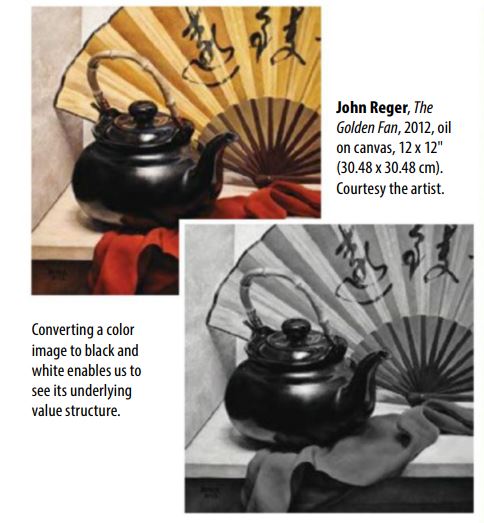 Every color image has a value structure. To make a two dimensional image appear three-dimensional, it is imperative to apply values correctly.

That said, it is very difficult to render an object in the correct range of values. For example, a specific, compressed value range would be required to accurately render each of the spheres shown in the image at left, below.

One way to determine the local value is to mix your best approximation of the value you think the object is. Then with a palette knife, hold a sample of the paint mixture to the setup to see if it matches the midtones. 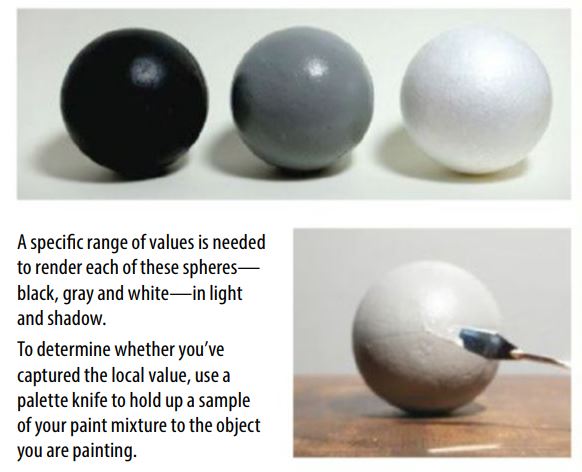 THE ILLUSION OF DEPTH

When we are painting forms we see, we are essentially describing the way the light is falling on the forms. When light strikes a surface to reveal the form it is hitting, it produces a perception of depth, and the painter’s goal is to produce the illusion of that depth through value.

Even when light strikes a flat surface, there is a slow gradation of values known as light falloff. This is very important to recognize, because if one value covers too much of an area, it will appear flat—similar to a paper cutout. 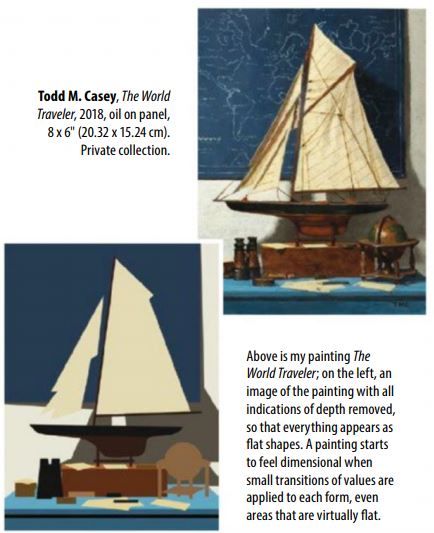 In a controlled indoor environment such as your studio, dark values fall back in space and light values push forward. This helps you set up your value range. The opposite, however, is true outdoors in nature: things grow lighter as they move back in space. In an outdoor scene, higher-contrast areas appear closer to the viewer; lower contrast—due to moisture in the air—looks farther away. (This is what’s known as atmospheric perspective.) You could have a studio setup in which the objects were backlit, making the background lighter than the foreground, but this sort of situation is very rare in still life painting.