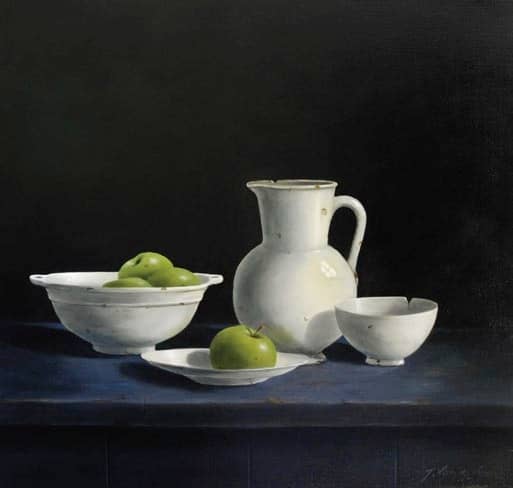 Jos Van de Ven was born in the south of the Netherlands not far from Van Gogh’s village.

He became interested in art at an early age due to two Rembrandt-like portraits of his great-grandparents at his home. Initially influenced by the French Impressionists, he received his first prize for painting at only age 19 and serving in the Royal Dutch Marines. At age 23, a meeting with Salvador Dalí at his home in Cadaques, Spain, sparked a lifelong interest in surrealism—an influence that can be seen to this day. Even when his paintings adopt a more classical approach, they have a surrealist touch, which poses a question to the observer. To complement his ideas in art he started studying philosophy. His questions: Why do I want to paint? And what? What do I want to say? These are questions many artists, painters, writers, actors and musicians ask themselves.

“With painting I could say and show things that I couldn’t do very well with words. I realized that a big part of life is a mystery. We don’t know all. We know quite a bit about the material world, but that’s not all there is. We tend to be stuck in matter. When painting I saw that fantasy and imagination is in fact unlimited. We can create any world or universe we want,” he says. “Then was born a form of non-conformism; I did not want to agree anymore to everything I saw or heard. It is a free world (although one might think otherwise) in which one can think anything one wants. From that moment on I was looking for a form of painting and subjects that would show a border between reality and fiction.”

But life took him into another direction for a while and painting became a scarce activity. When he picked up his paintbrushes again, he had an idea about what to paint. He had changed and was looking for something that would allow him to express what he wanted to say with his art. He started studying the techniques of the 17 th -century Dutch Masters with guidance from the Dutch painter Cornelis Le Mair. Using his knowledge, Van de Ven experimented with a variety of traditional materials and approaches. He realized that the knowledge of painting is almost lost in the modern world (regular art academies don’t teach this anymore) and that the traditional know-how of classic painting was fundamental if he wanted to know the real skills of painting.

His work took on another form. This included making copies of Old Masters works like those by Vermeer, Rembrandt and DaVinci. The influence of Vermeer became clearly visible, leading to a fascinating combination of the best classical techniques with a modern viewpoint. From him and the traditional Flemish and Dutch Masters in the museums, Van de Ven learns the precise gestures, the expressive quality of matters, the chromatic harmonies and the utilization of the natural light.