THE ART OF SAMSON POLLEN 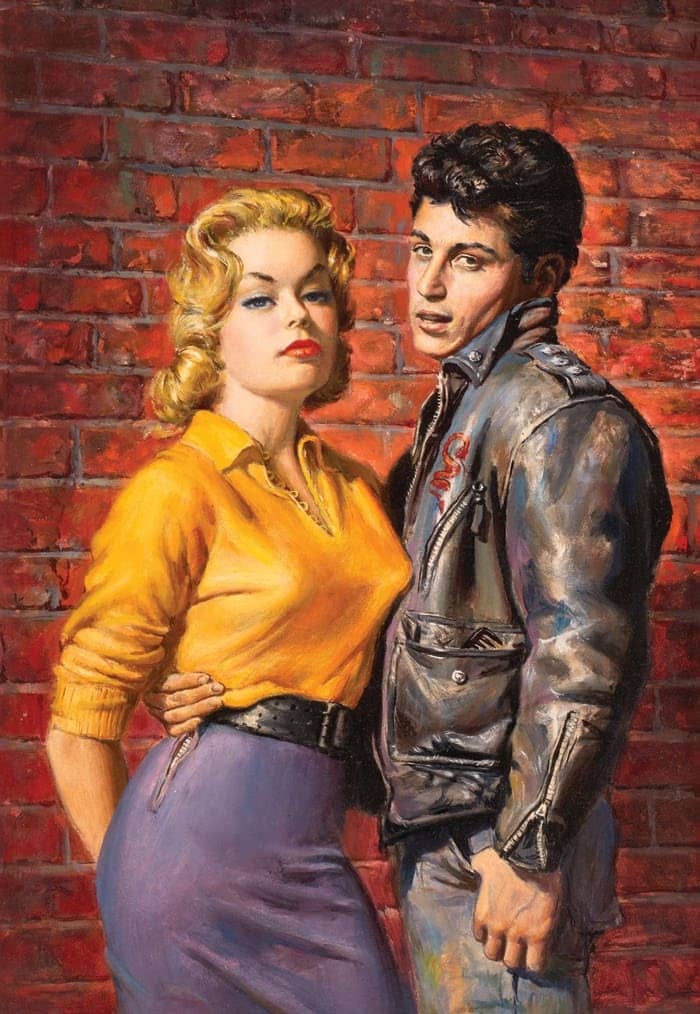 Men’s adventure magazines (MAMS, for short) and paperback books were two of the best markets for illustration artists during the 1950s, 1960s and 1970s.

Samson Pollen, who passed away in December of 2018 at age 87, was one of the grandmasters of both MAM illustrations and paperback cover art. 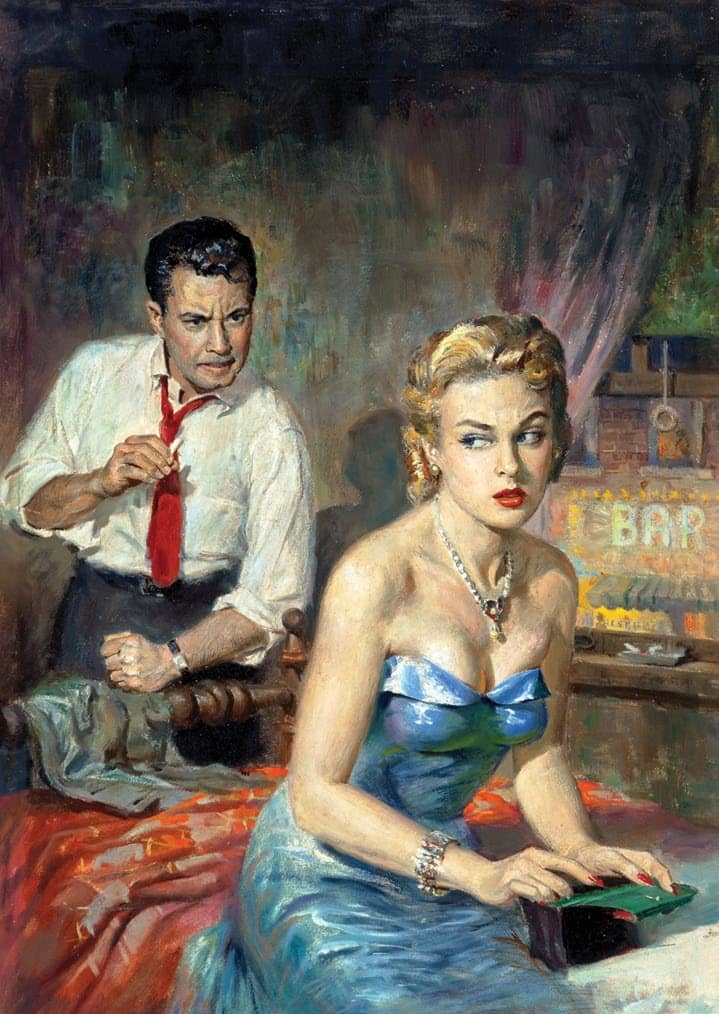 A few years before he died, I contacted Pollen to ask if he’d be willing to let me publish a book showcasing his original illustration, as part of the “Men’s Adventure Library” book series I edit with Wyatt Doyle. He was, and we soon discovered that Sam had done enough MAM and paperback artwork to fill several books.

We published two before he died: Pollen’s Women, which focuses on MAM artwork he created that features images of alluring female characters, and Pollen’s Action, which focuses on scenes he painted for some of the wild action/adventure stories that appeared in the MAM genre. He also gave us scores of examples of his paperback cover art.

There were two periods in his career when Pollen did paperback cover paintings. The first was from the early 1950s to 1960. During the ’60s, he primarily did artwork for MAMs. As they began to fade away, he focused on paperback covers again from the late ’60s to the mid-’90s. 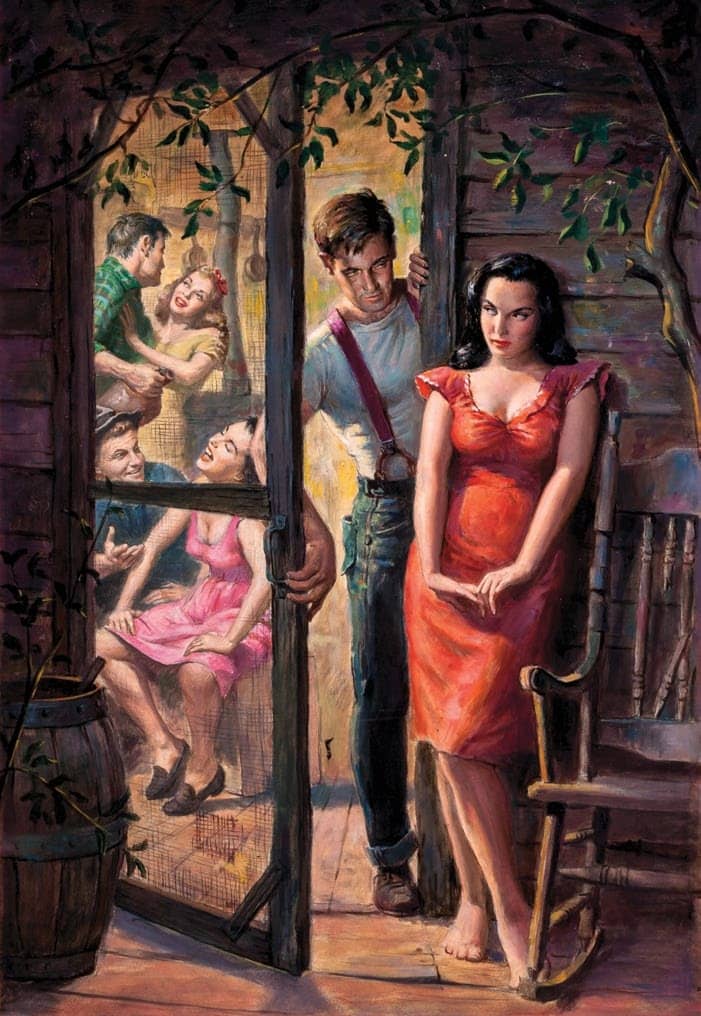 Pollen was born in the Bronx on March 19, 1931. His family moved to Brooklyn when he was 11. From an early age, he showed a talent for artwork. This was noticed by a high school teacher who helped him get enrolled at the venerable National Academy of Design in Manhattan. There he was taken under the wing of the school’s Dean, Charles Louis Hinton, a legendary painter, sculptor, book illustrator and muralist.

After studying at the Academy and graduating from high school, Pollen got a job as an apprentice at the WittrupPatterson art studio in New York, owned by top commercial illustrators Jack Wittrup and Robert Patterson. 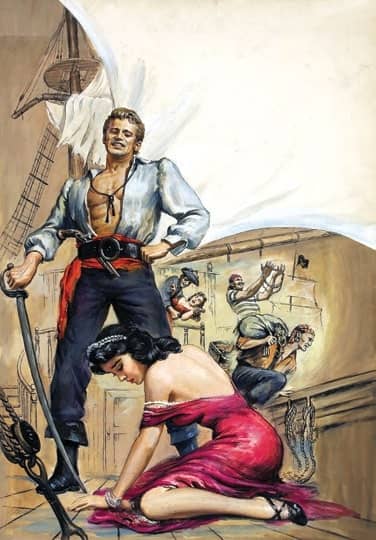 “They had a great stable of artists who did work for Coca-Cola, Phillip Morris, Ford, and many other major corporations,” Sam recalled. “I cleaned brushes, stretched canvas, helped the studio’s photographer, and posed for reference photographs used by the artists. Each artist had his own separate studio, and I would often pop in during the day and see how their work was progressing. At night, after hours, I did my own sample paintings. Being it was so late and far to travel home, I would often sleep on the couch. Jack Wittrup said I had a great future there. Unfortunately, six months after I stared my apprenticeship, the Korean War broke out and I knew I would soon be called to duty. Some of my friends were in the Coast Guard Reserves, so I joined them.”

Pollen was stationed in New York. When Pollen’s superiors became aware of his artistic talent, they asked him to do illustrations for the official Coast Guard magazine. He did, and by the end of his tour of duty, he was offered a post in the Coast Guard’s Art Department if he’d re-up. He decided instead to try to become a professional illustration artist. 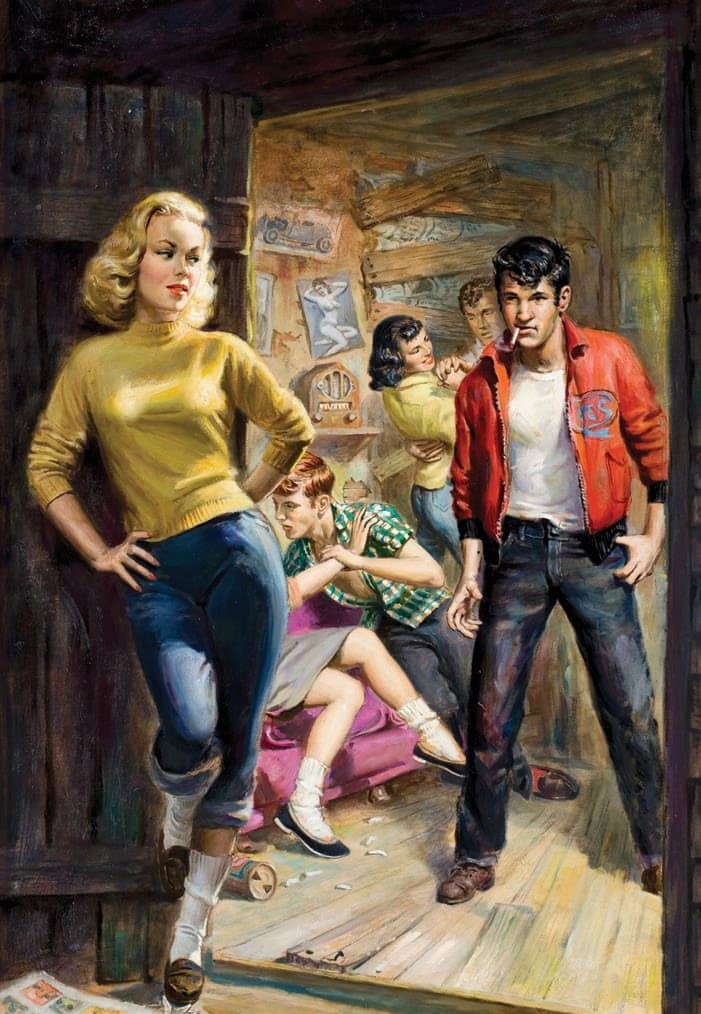 In the early ’50s, for someone with Pollen’s talent, this was not an unrealistic goal. Artwork was still being used heavily for book and magazine covers, interior illustrations and advertisements, and New York City was the headquarters for many major American publishers and ad agencies. Naturally, New York was also where many top illustration artists lived and worked.

“Ed Balcourt got me work doing paperbacks for publishers like Ace Books, Avon, Midwood, and Pyramid,” Sam said. “At his office I met other artists who became friends, like Lou Marchetti, Bob Maguire, Rudy Nappi, Tom Ryan and others.”

Unfortunately, unlike some illustration artists, Pollen didn’t keep an ongoing written list of his magazine and paperback assignments. Nor did he keep copies of all the books he did covers for or tearsheets of all the MAM stories he illustrated.

Moreover, like some other artists who worked in what were viewed as lowbrow, disposable magazine and book genres, Pollen almost never signed his MAM illustrations or paperback cover paintings. He only started signing them decades later—retroactively—when vintage “lowbrow” illustration artwork became valuable enough to entice him to sell some of the hundreds he’d stored away to collectors.

Pollen still had roughly 200 originals when I got in contact with him. He also had hundreds of photos in JPEG format of his MAM and paperback art, and some of the magazine spreads and book covers they were used for.

However, unlike some illustration artists, he didn’t write any identifying notes on the backs or margins of the illustration boards he used. And, the file names he used for photos were almost all cryptic descriptions of the scenes, such as “shooting inside german submarine” and “015 paperback spread stagecoach pirate.” 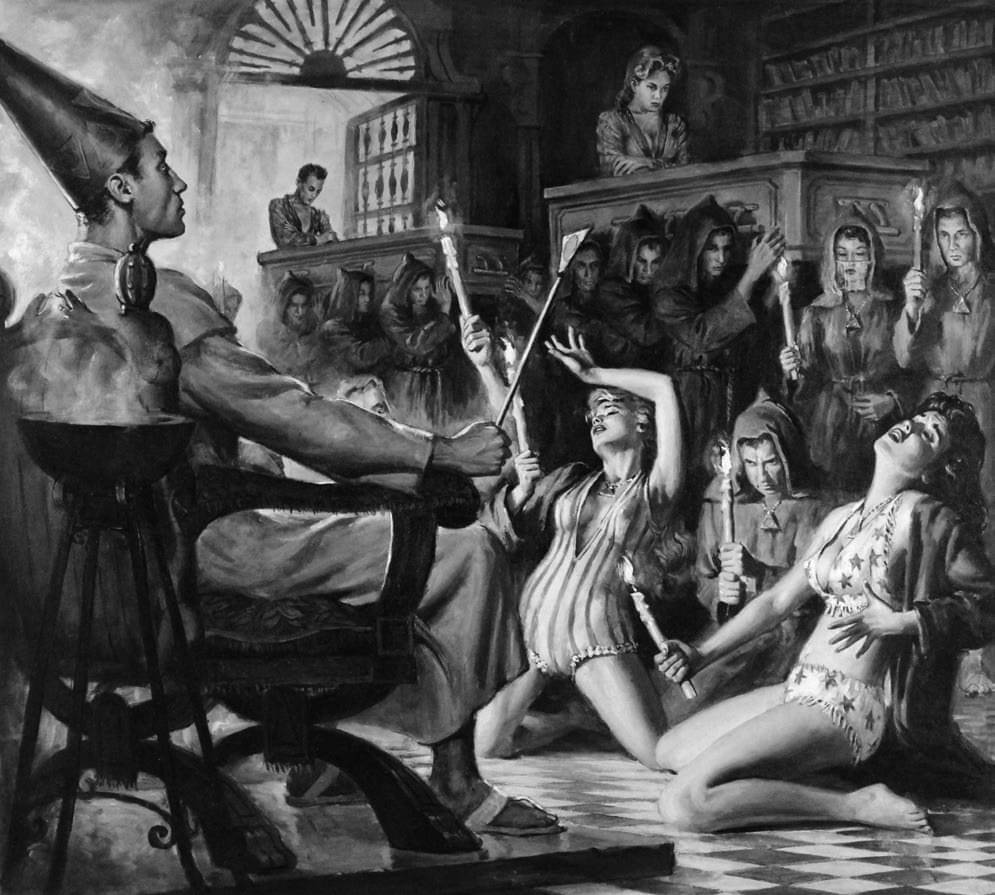 For purposes of creating books and articles about Pollen’s art, that led to months of detective work. Much of that time was spent thumbing through my own large collection of men’s adventure magazines. By looking through hundreds of issues of the MAMs I knew Pollen had worked for and asking for help from other knowledgeable collectors, I eventually managed to ID almost all of the issues and stories his artwork appeared in.

On the paperback front, I started with a short list Pollen had of his favorites, the names of some of the Western and action/adventure series he did covers for, and JPEGs of his cover art. By doing a lot of Googling and reverse image searches, I managed to ID most of the paperbacks Pollen gave us names or images of. And, as I searched through series I knew he’d done at least some artwork for, I found many he had no visual of written record of.

Sam wasn’t sure what his first paperback cover was, but it appears to have been Four Sided Triangle, a science fiction novel by William F. Temple published in 1952 by Galaxy.

Between 1952 and 1960, Pollen’s first major paperback phase, he did dozens of cover paintings for various publishers, including Ace, Avon, Berkley, Galaxy, Lion, Midwood, Pyramid, and Zenith. 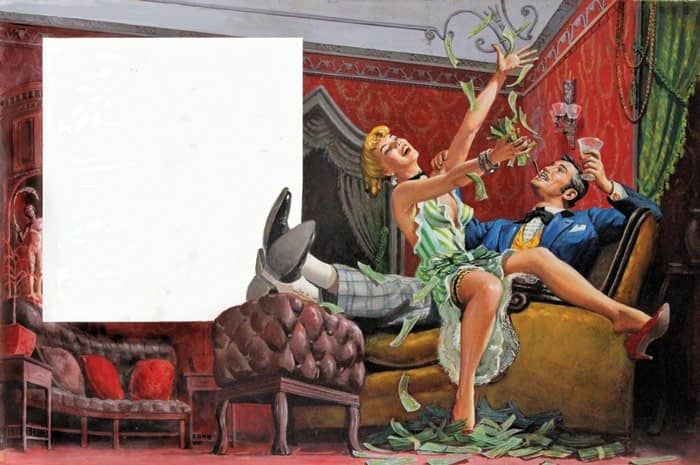 Some of the paperback editions of novels Pollen created cover art for were written by notable authors, such as: How Like a God by Rex Stout (1955); Night Train written by Ross Macdonald under the pseudonym Kenneth Millar (1955); The Naked and the Guilty by Ralph Ingersoll (1955); The Naked Year by Philip Atlee (1956); The Oracle by Edwin O’Connor (1956) and Cry Tough! by Irving Shulman (1956).

Some early Pollen book covers were for the genre of books vintage paperback aficionados often fondly refer to as “sleaze paperbacks.” Examples in the “sleaze” genre include: The Girl From Hateville by Gil Brewer (1958); A Doctor and His Mistress by Orrie Hitt (1960); All About Annette, written by Donald Westlake under the pseudonym Alan Marshall (1960); All the Way by Mike Avallone (1960); and Nurse Carolyn, written by Robert Silverberg under the pseudonym Loren Beauchamp (1960).

One early paperback cover Pollen liked to tell an anecdote about was P.A. Hover’s novel Riverboat Girl, published by Ace in 1956. It was part of a racy rural novel subgenre that was popular in the ’50s.

“I liked doing covers with barefoot Appalachian beauties,” Pollen said. “For Riverboat Girl, I used Ed Balcourt as a model for the city slicker walking onto the porch of a Hillbilly shack. An old man with suspenders is sitting and sleeping on a barrel with a shaggy dog sleeping by his side. In the meantime, Balcourt and the girl are eying each other. I was enticed by the mood and the drab, yet colorful surroundings. I always wanted to drive my Triumph sports car through the back hills where I might get a whiff of the stills and the type of life they were living. Too bad it was never meant to be.”

A number of Pollen’s classic early paperback covers are popular in internet and social media posts and books about vintage paperbacks from the ’50—though most are unsigned and not identified as Pollen covers. 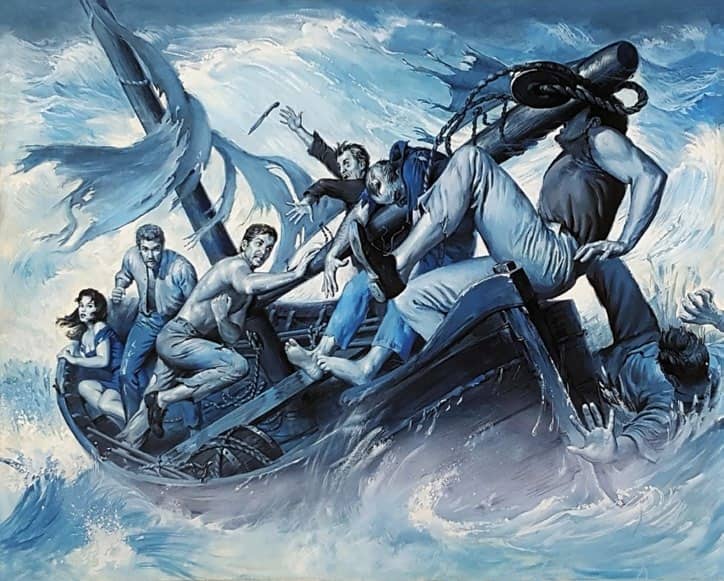