THE ART OF NEYSA MCMEIN 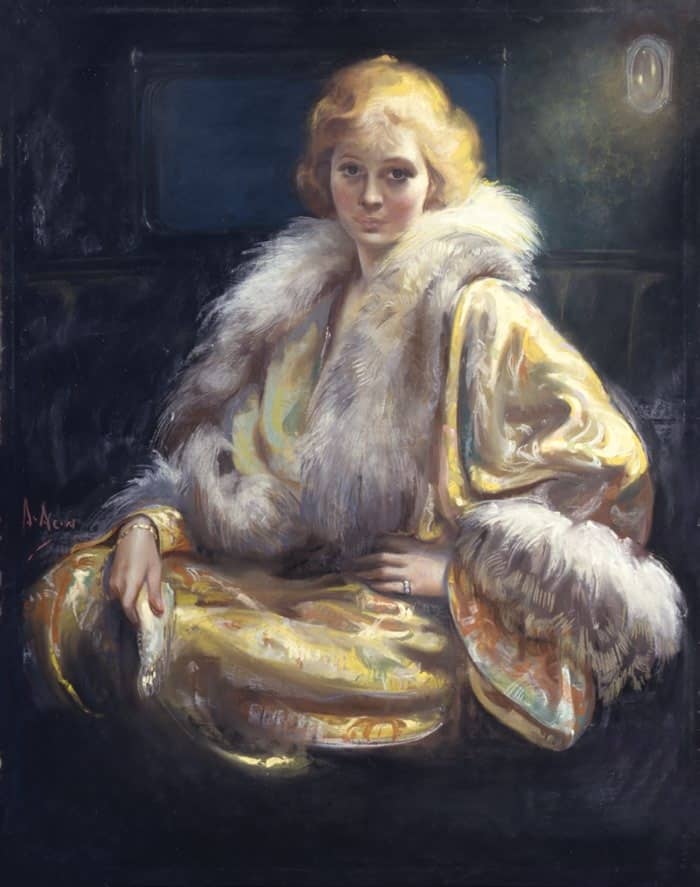 Margary Edna McMein was born in Quincy, Illinois on January 25, 1888. (Various sources list her date of birth as 1890, and a few as 1889—once McMein moved to New York she decided to trim a few years from her age.)

Her parents were Isabelle Lee Parker and Harry Moran McMein, and they had been married a mere ten months before their only child was born. Harry worked at the Whig, one of two local newspapers, thanks to his successful elder brother William, who had married into a wealthy family and eventually bought the paper. Marjorie (as her name came to be spelled) grew up in a modest household, which included both of her grandfathers. Her father Harry began drinking heavily and soon squandered the family fortune. Belle, like Harry’s mother before her, took refuge in her church circles. 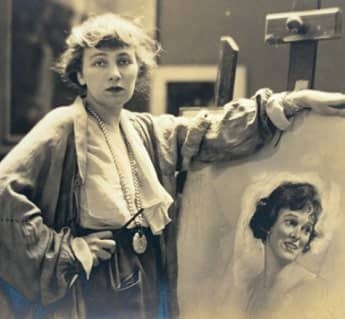 Marjorie was pretty and bright, and she developed considerable artistic and musical talent early on. But her home life was strained, and she would often be forced to stay for a month or two at a time with the family of a wealthy school friend. In high school she won praise for her performance in the senior class production of Goldsmith’s She Stoops to Conquer. Though she was inclined to pursue her musical talents, she realized that success might take too long to achieve, and her family’s financial straits required her to become self-sufficient as quickly as possible. Art seemed to be the better career choice, so her father helped her enroll at the Art Institute of Chicago. In September, 1906, Marjorie boarded a train for the Windy City. 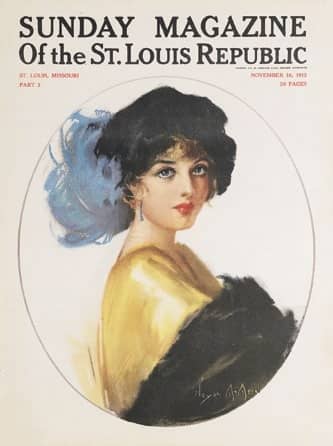 During these lean years, Marjorie supplemented her income through music—playing the piano in dime stores, accompanying silent films in nickelodeons, and even writing music for a vaudeville show. She attended the Art Institute for two years, and then found a job at the Gage Brothers Millinery Company, running office errands and addressing envelopes. But her days of paying dues didn’t last long, and soon a pencil sketch of a hat with a pretty girl’s face below it attracted the attention of her employers. By 1911 she was earning $15 a week producing ink drawings of hats for the company’s newspaper ads. 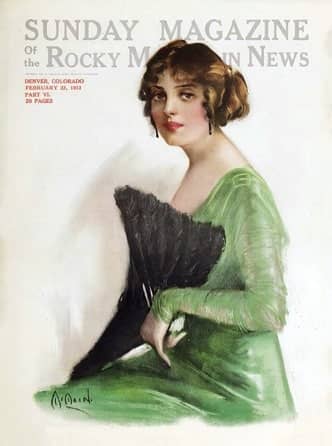 Her own striking face led to a few modeling assignments, and she began designing hats as well. As can be seen by a quick overview of her illustrations, fashionable hats would feature prominently in her work throughout her career. While in Chicago she illustrated her first magazine cover, the February, 1909 issue of Woman’s World. The illustration was a charcoal sketch overlaid with watercolor, signed “McMein.” 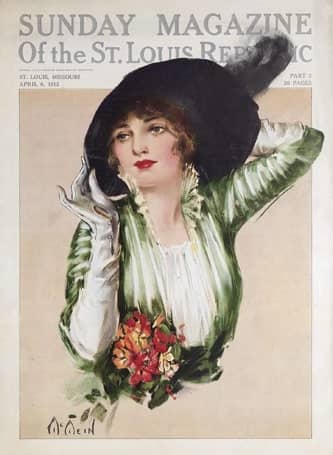 The same charcoal-and-watercolor technique was used on several postcards copyright 1910 by M.A. Templeton, published by The D Company of Chicago. Some of the Templeton cards were printed in black and white and then hand-colored. Most of these cards have the printed signature “Marjorie McMein” but some read “Margie McMein” and a few are signed simply “McMein”. 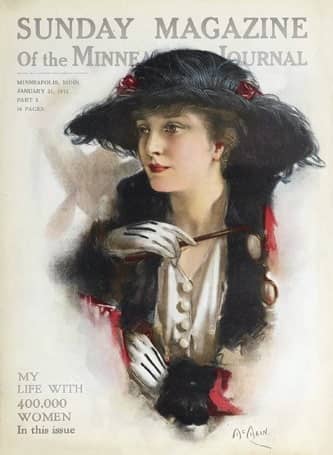 McMein was fond of telling reporters about some of her early sales:

The first commercial work I ever did was the drawing of a dressing-sack. I was commissioned to do it by a Chicago dry goods shop, for use in their newspaper advertisements. I felt much as if I had been selected to redecorate the Sistine Chapel. I took the dressing-sack home, and drew it from every angle. I put in every mesh of the lace, every thread of the ribbon. I made about 60 sketches of it, consuming easily $4.80 worth of paper. Then I took the drawings back to the dry goods firm, and waited while they chose one. They paid me 75 cents for it. 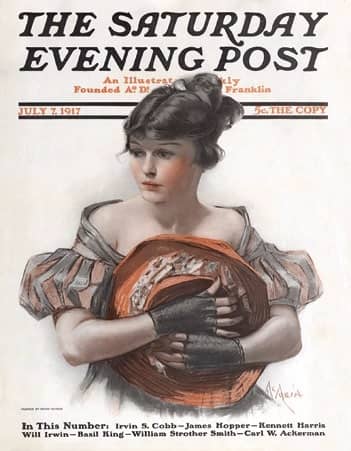 Encouraged by her initial successes in Chicago, Marjorie longed for the greater opportunities to be found in New York City, and her chance to make the move came via the theatre:

I grew up in Quincy—given a map of Illinois and a quiet half-hour, you will probably be able to find it, or perhaps you may have some traveled friend who once went through there on a fast train. I went to Chicago to art school. We art students, in that Bohemian way of ours, used to gather together and give amateur shows, as frequently as possible. It was in one of these that I had the big idea of blacking up and giving an impersonation of Bert Williams. My partner in this spectacular production was a girl who dressed as a scarecrow, and did one of those fascinatingly loose, casual dances in which all stage scarecrows indulge. As a daring climax to the act, I was to pile her into a wheelbarrow and push her off the stage, down an incline, and into the chaotic realms backstage. 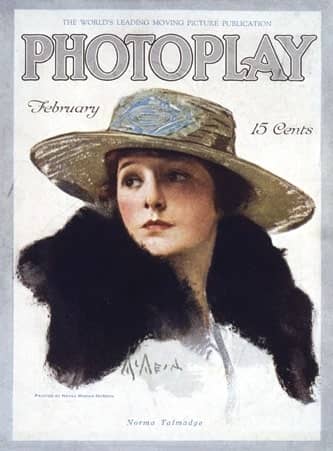 At the actual performance, crazed with success and first-night nervousness, I heaped her in the wheelbarrow, trundled it triumphantly off, and missed the incline—clean. We crashed rakishly down a flight of steps, and in record-breaking time had amassed one of the most complete joint collections of bruises, turned ankles, and sprained wrists ever seen in the Middle West.

But the evening had other results, too, and scarcely less harrowing ones. Paul Armstrong, the playwright, happened to be a member of the audience; he offered me a part in his vaudeville act, “A Romance of the Underworld.” 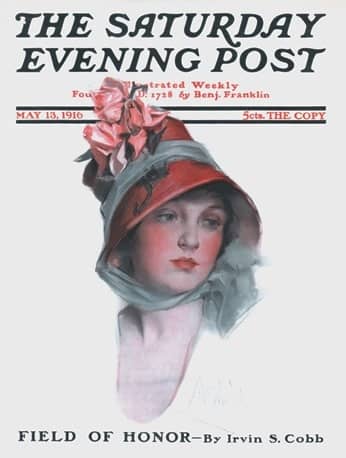 Well, you know how a girl of the art-student age feels about going on the stage. She is all convinced that with any sort of chance she can put the American drama right on its feet. There was my father, of course—maybe you don’t know how they feel, out in the great open spaces of Illinois, about girls who go on the stage—but I talked him into it by a grueling, wearing-down process. Having joined the company, fairly secure to the title of America’s Least Talented Actress, I traveled with “A Romance of the Underworld” to New York.

On the way, it became clear that Marjorie’s talents did not lie in the dramatic arts, and her association with Paul Armstrong (the brother of Chicago Art Institute student Rolf Armstrong) ended when the troupe reached New York. 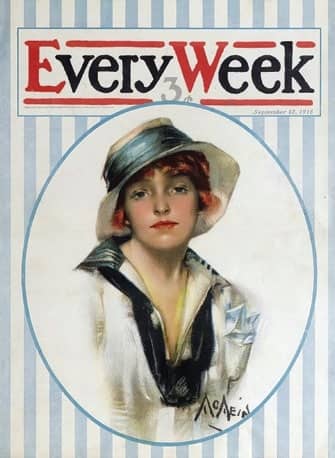 The move to New York occurred sometime in 1911. By July, 1912, she made a return visit home to Quincy and let it be known that she had taken the name “Neysa.” As she later explained, she detested her given name:

We all have our crosses to bear. I was christened Marjorie.

There are those, it has been patiently pointed out to me, who do not share my feelings about the name of Marjorie. It induces in them neither mental pangs nor nervous tremors; they are able, as you might say, to take it or let it alone. There are even those who look upon it as the pearl among feminine titles. They select girls named Marjorie to marry, and then pass the name on to their subsequent young, so that there may always be Marjories in the world. I wouldn’t for anything have you get the idea that there is not much to be said on their side—if we didn’t all have our little likes and dislikes, where would politics be today? 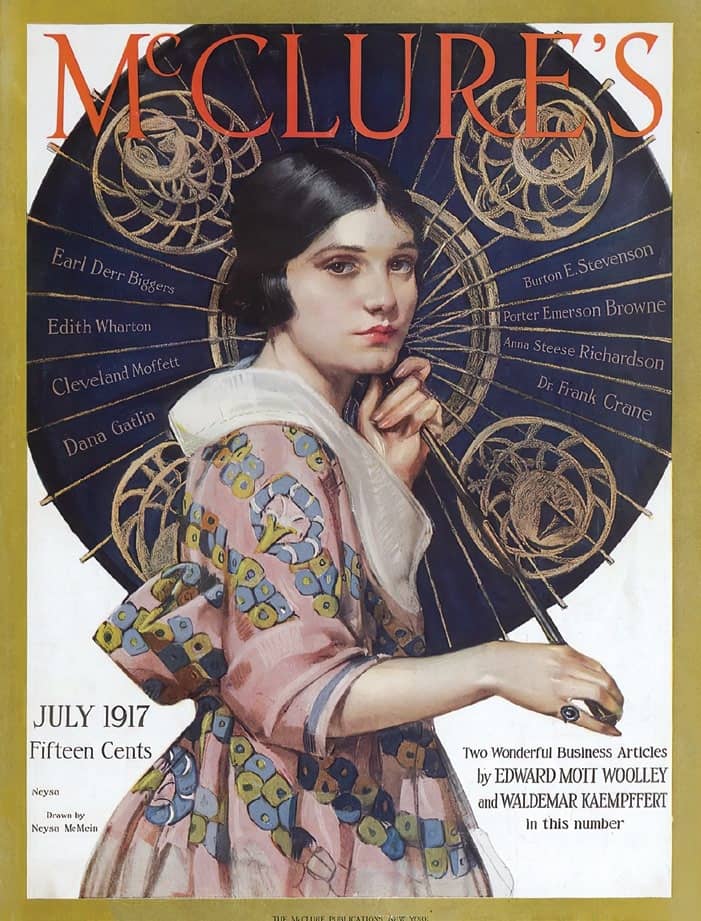 My feeling in the matter is purely personal. The application of the name Marjorie to me was a regular little masterpiece of the inappropriate. I always see a Marjorie as a small dark girl, with netted hair and quiet hands. And Nature had a lot of other plans in mind when she got around to building me. As long as I can remember, I was pretty fairly bitter about my name. The sound of it, to put it in the form of a simile, was like a red rag to a bull in a china shop.

I found my adopted title, eventually, in New Jersey, where so many little things are picked up. 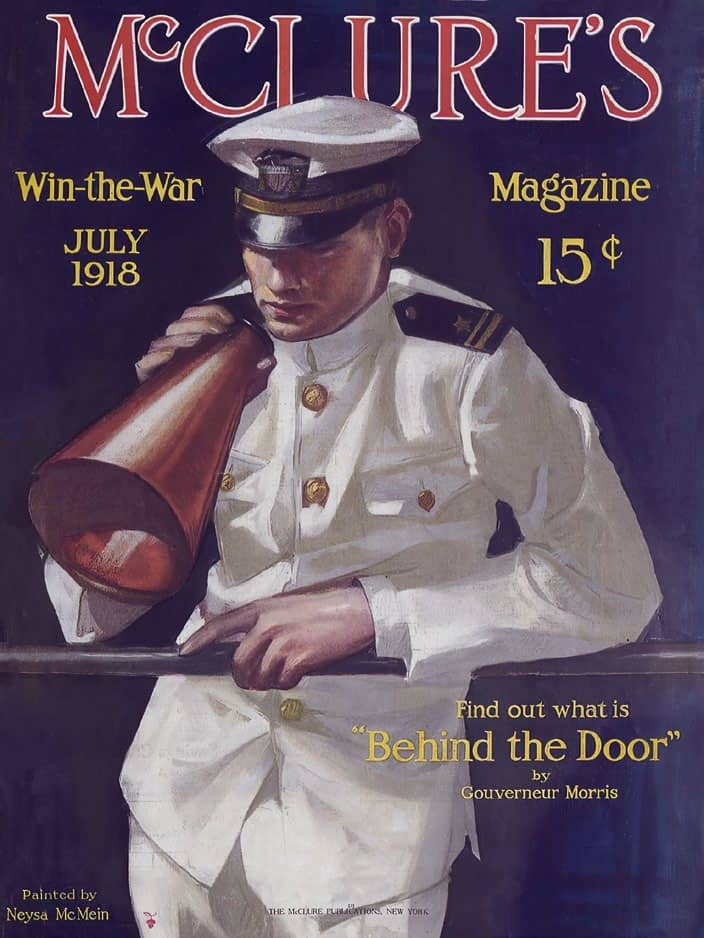 I was at a house party, at the Davenport place in Red Bank. Mr. Davenport had sent to him, by some grave Oriental dignitary, a string of glorious Arabian horses. Among them was a shining black mare, as swift as a breeze and as capricious; I saw her first as she ran lightly and soundlessly through the dusk, a slim Arab boy on her satin back—it remains the most beautiful picture that my memory can show me. I asked the mare’s name. And as perhaps you have guessed by this time, it was Neysa. 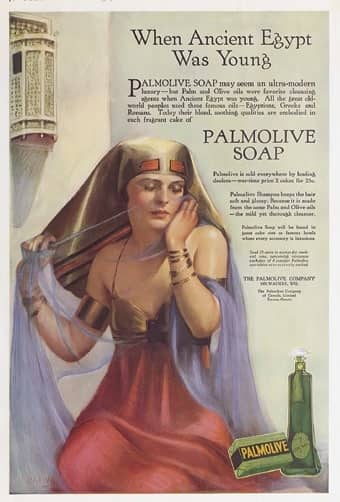 Because of that swift, sharp vision, the very name was glamorous and romantic to me.

At the behest of Homer Davenport, a noted cartoonist, Marjorie consulted the numerologist Asa Neith Cochran, who decreed that “Marjorie” was not an exotic enough name for an up-and-coming artist, and suggested that she change it to something else. When McMein suggested “Neysa,” the soothsayer said “Perfect. The name ‘Neysa’ will bring you fame and fortune.” 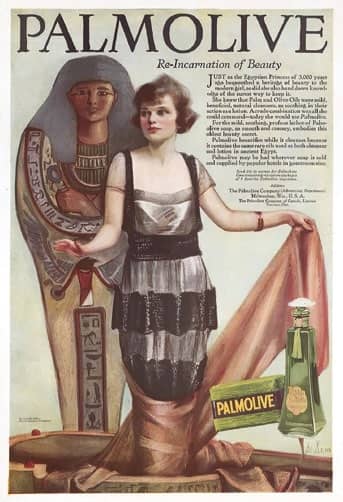 Unfortunately the pronunciation of her name was anything but obvious, and would give her much trouble. As she recalled:

I doubt if I could, even trying with all my strength, have selected a name that could have been more often mispronounced. 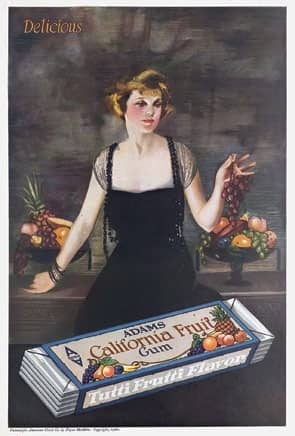 I have grown almost pitifully used to it now. I am so often addressed as Nayza McMyne that I answer with polite promptness to it. I used to explain, apologetically, that both my names were pronounced with long e sounds, Neesah McMeen—if it was all the same to the speaker. A once proud spirit lies crushed and broken. After countless unequal battles over the telephone and on my shopping tours, I reply gratefully to whatever they choose to call me. Even curious printed versions of my poor name no longer stir me. Only once, when I saw in a German newspaper sent me by an over-thoughtful friend, that I was referred to as the American artist, Mr. Neuter McNeil, did I feel the sharp pangs of injustice. 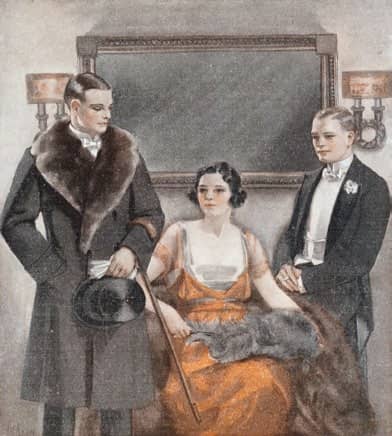 At this early stage in her career, she shared an apartment with a few other struggling young women. Money and food were scarce, and Neysa and her roommates lived on a diet of popcorn, supplemented by large glasses of water to make it swell and fill their stomachs. She added to her income by working as an extra at the Metropolitan Opera House, and at the same time she enrolled in figure drawing classes at the Art Students League to improve her skills. 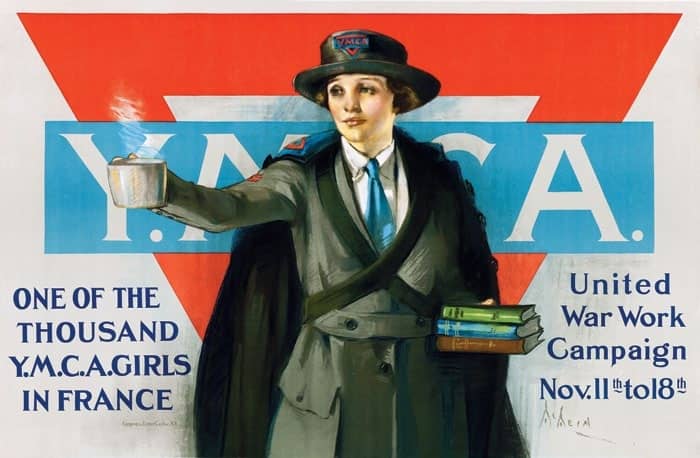 At the same time she discovered her new nom-de-plume, she also came to realize that pastels were her ideal medium, the brilliant sticks of chalk being perfectly suited to her refined sense of color:

MORE STORIES FROM ILLUSTRATIONView All