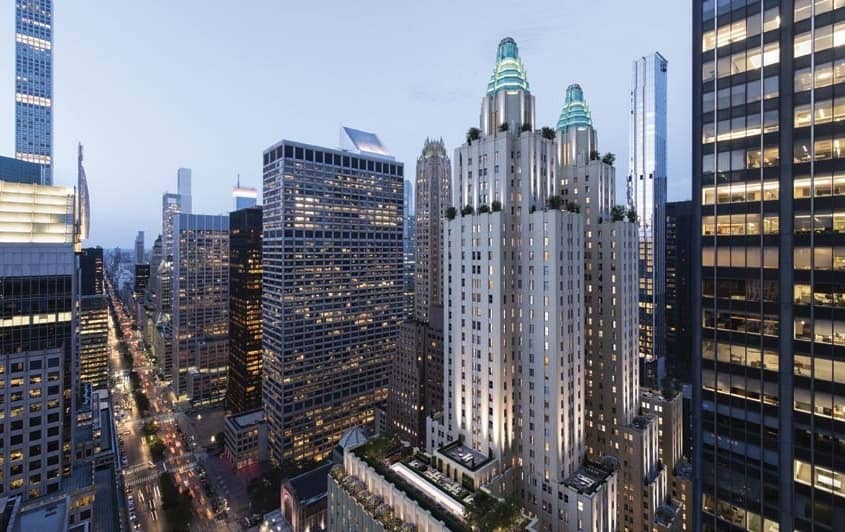 The renovation of the Waldorf Astoria Hotel New York, one of the world’s most iconic hotels, is being managed by a team comprising highly revered architects, designers and engineers, to ensure that the magical Art Deco masterpiece is restored to palatial perfection.

Leading architects from Skidmore, Owings and Merrill (SOM), leading interior designer Jean-Louis Deniot and leading French interior architect Pierre-Yves Rochon not only top the billboard of the world’s best designers – they have been hand-picked to ensure that one of the world’s grand dámes is given a glamorous and sophisticated facelift.

The high-profile design team has the delicate task of completely remodelling the 47-floor (190-metre-high) brick and limestone building that was designed by architects Schultz and Weaver in 1931. When it first made its debut, the hotel was the world’s tallest building.

Currently owned by the China-owned Dajia Insurance Group, the Waldorf is said to be the largest privately-owned landmark in New York City.

The 153,000-square metre property was closed in 2017 and is to re-open in 2022 following the extensive programme, which involves creating 375 luxury condominiums and the same number of hotel rooms from the space initially allocated to some 1400 hotel rooms.

Over the decades The Waldorf Astoria New York has had numerous Hollywood divas, stars, and musicians as long-term residents, including Frank Sinatra, Elizabeth Taylor, and Angelina Jolie. Cole Porter, who called the hotel his home for over three decades, wrote his famous You’re The Top number from his musical ‘Anything Goes’ while living there.

The property’s famed kitchens invented the world-famous Waldorf salad and Eggs Benedict. From the outset, the motto ‘The guest is always correct’ was standard practice.

Yet this will be the first time that current A-list celebrities and wealthy investors will be able to own a slice of this coveted Manhattan property.

“We have embraced a profound responsibility as the stewards of the Waldorf Astoria and assembled an incredible team to bring an unmatched residential product to the New York City market,” said Andrew Miller, CEO of Dajia US.

“For almost 100 years, the Waldorf Astoria has been New York’s ‘unofficial palace’, and was famously anointed by Conrad Hilton as ‘The Greatest of Them All.’ Now, with residences for sale for the first time, buyers from New York and all over the world can call it home,” Miller added.

The developers are also hoping that the exclusive properties will be appreciated by discerning Middle Eastern investors.

The renovation of the building has been extensive, and the design team was challenged with recreating a high-tech modern interior and exterior while remaining true to the essence of the property and its Art Deco origins.