If one were to think only of surfaces, there are parallels in the work of Kristine Poole and Francis Di Fronzo, the former a sculptor and the latter a painter.

Poole embellishes the bodies of her female figures and Di Fronzo depicts the marks of time of the surfaces of the buildings, trains and vehicles he paints. Both are approaching the half-century mark, a time for self-examination or, in the case of artists, reexamination, since artists are always self-aware.

Their work will be shown in an exhibition, Parallels, May 31 through June 22, at EVOKE Contemporary in Santa Fe, New Mexico. 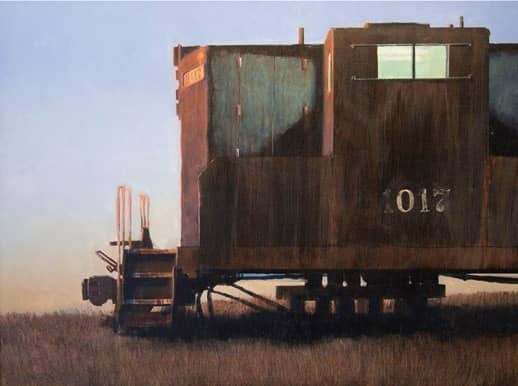 Di Fronzo often paints the remnants of people having pursued their dreams. Dreams are ephemeral. The pursuit of them can result in their being realized or, more often, be fruitless. The honor lies in having had the courage to pursue the dreams at all.