TO THE PASSION, PERSISTANCE & PROWESS OF AR. REVATHI KAMATH 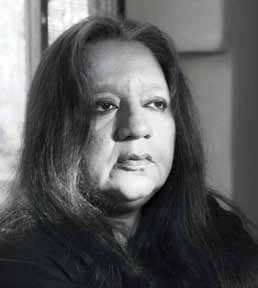 Most people recognize her as a pioneer of ‘Mud Architecture’ in India, someone who gave it a new dimension. However, as an architect as well as a person, she was much more. A person who wouldn’t hesitate calling a spade a spade, with an unmatched sensitivity towards nature and her craft is something we always will remember about her. WADE ASIA and Surfaces Reporter (SR) have been associated with architect Revathi Kamath through her works. She was the receipent of the WADE ASIA Sustainability Champion Award in 2018. She has also been the recipient of the prestigious Aga Khan Award. This article is a heartfelt tribute to the great architect with some not so known facts about the architect which she revealed during her presentation at WADE ASIA. If you have knew her well or have a message to share about Ar. Revathi Kamath and her work, please write to us at press@surfacesreporter.com

Born into a Tamil Brahmin family in Bhubaneshwar, Revathi Kamath’s initial year with her Engineer Grandfather paved a way for her becoming an architect in later life. Her grandfather who was the Chief Engineer at New Town, was very interested in architecture and thus used to subscribe a lot of architecture magazines. Since she lived with her grandparents, she was contantly in touch with those books that gave her an indepth exposure to the subject that kindled a desire to be an architect. Flipping through the pages of those books, Ar Kamath was familiar with names like Robert Venturi, Bruce goof, Frederick J. Kiesler and Frank Lloyd Wright at very early in her growing years and thus deepened her understanding of different forms of architecture. Her father, who too was a civil engineer, was working on the Hirakud Dam, so Revathi spent her time in Bengaluru as well as surrounding tribal areas, that shaped her understanding and made her sensitive towards the organic forms of architecture.

Talking about her early years, during a conference, she said, “As far back as my memory takes me, I had always wanted to be an architect. From the age of about five to sixteen, my annual holidays in Bangalore were spent browsing through my grandfather’s architectural journals. I would drown in the world of Frank Lloyd Wright, Bruno Taut, Bruce Goff, Oscar Niemeyer, Fredrick Kiesler and Eric Mendelsohn. Keisler’s Endless House is ensconced in my subconscious, and Kenzo Tange, whose incredible stadia were imprinted on a medallion that I wore around my neck through my college days.”

She did her Bachelors in Architecture (1977) from the School of Planning and Architecture (SPA), Delhi when on a trip to Kerala, she came across the works of laurie Baker. That was a transformative trip for her as it was when after seeing the examples of Vernacular Architecture, she decided what she had to do in her life. Later she did her Post Graduation in Urban and Regional Planning (1981) too from SPA. During this time, Ar Kamath began working with the Group for Rural and Urban Planning, in partnership with Vasant Kamath, Romi Khosla, and Narendra Dengle where later in 1981, she opened her own studio with architect Vasant Kamath by the name of Revathi and Vasanth Kamath which later came to be known as “Kamath Design studio – architecture, Planning and Environment” (2005) after the joining of their son Ayodh Kamath.

At the building site, she remembered the words of Mahatma Gandhi, when he said, ‘Recall the face of the poorest and weakest man you have seen, and ask yourself if this step you contemplate is going to be of any use to him’.

THE ANANDGRAM REHABILITATION OF IMPOVERISHED

Revathi Kamath’s very first project, The anandgram, was the rehabilitation of community of traditional performing artists and craftspersons called the Bhule Bisre Kalakar sahkari samiti who lived under the Flyover in Shadipur Depot, Delhi. For a year, Revathi worked closely with them and evolved a design where they could live and work simultaneously. During that project, Revathi got the understanding of stabilized brick houses and since then she kept evolving the technology of Mud architecture and stabilized earth construction.

With time she became one of the most sustainable architects India has ever produced where her project spoke greatly about her understanding of Ecology and the wisdom gathered from various traditions across the world. Ar Kamath didn’t limit herself to India; she took inspirations from vernacular architecture practices across the globe like the bamboo artisans in Indonesia, Combodia and adobe architecture of Mexico, earth architecture in China and continued to experiment with them in her projects. Talking about working ecologically, she said, “Building with earth has been great. It’s not a passion. It’s really a compulsion because I feel it in the ecosystem we live with.”

The Kamath Design Studio has been involved in a wide variety of projects – starting with Seemapuri and Anandgram slum resettlement projects and then moving forward into private developments like the Desert Resort in 1984, Management Institute in 1989, and the Kohima Cathedral in 1991. Despite being a champion of sustainable architecture through her use of Mud and other materials commonly associated with impoverished communities in luxury projects, Ar Kamath used to critisize LEED ratings claiming that India already has many sustainable building techniques that are long existed outside the ambit of the recognized standards. Her own house was a true embodiment of her ideology. Sitting atop a land that was once a quarry, the Kamath House was designed and built “embodying the ecological principles of interdependence, recycling, democracy, partnership, flexibility, diversity and as a consequence of all those – sustainability” in her words.

Talking about imbibing the natural element and habitat in her projects especially in her own house, Ar Kamath said, “I think the prime importance should be on incorporating nature and sustain it during the process of building, acquiring materials and then living in it. Making nature a part of our home at Anantpur is really what I believe in. I remember I wanted to incorporate solar energy for cooking but there was an issue of monkeys. So, I made these incredibly beautiful solar cookers, embedded with mirros and when the monkeys used to come, they just went on to their way without bothering the set up. Only nature decides what you are going to do and how you are going to live. You only have to allow that to happen. We have created such architecture that is sensitive to nature. We have regenerated the entire flora and fauna in that space that we have occupied for 25 years. While the city has engulfed the forest, here, you can see the forest embed in the house itself.”

Ar Revathi Kamath was the receipient of prestigious WaDE sustainability Champion of the year award 2018 during a glittering event, awarded by legendary architect Raj Rewal and Vertica Dvivedi. While talking about her experience about gender discrimination against women in the field of architecture & building design, Ar Revathi Kamath during WaDE asIa Conference for women in architecture, design, art & enginnering, exclaimed, “In the academic space, gender discrimination was a mere irritant. It did not assume proportions to undermine my creative flow. The workspace was a little more threatening, and I developed a protective shield of being argumentative. The attribute of argumentativeness was enough to see me through the initial years of office work, but being at the building site was a prohibitive experience. The sacred space where drawings were transformed into material reality was not a zone of comfort for a woman architect. Here I encountered hostility, resentment and a deep sense of mistrust. The challenge was to deal with these negative emotions and transform them to create a positive environment for the transfer of information from the creator/thinker to the doer. There was an urgency and immediacy to formulate strategies to get the job done.”

Contrary to many other women architects and designers who sometimes lose themselves in the shadow of their famous husbands while working together, Revathi was a clear exception. She always had her own identity and infact worked on many projects independently despite being associated with Vasant Kamath, who was an institution in himself.

She once said, “If you are a woman architect and you are working with your partner, it doesn’t mean that you have to work on a single project. You can work on your own project and express your own sensibilities and ideas. And that is what I have done in this 38 years old practice. People may say that since we are husband and wife, our work is replaceable but it’s not.” Ar Kamath told during WADE ASIA.

MORE STORIES FROM SURFACES REPORTERView All