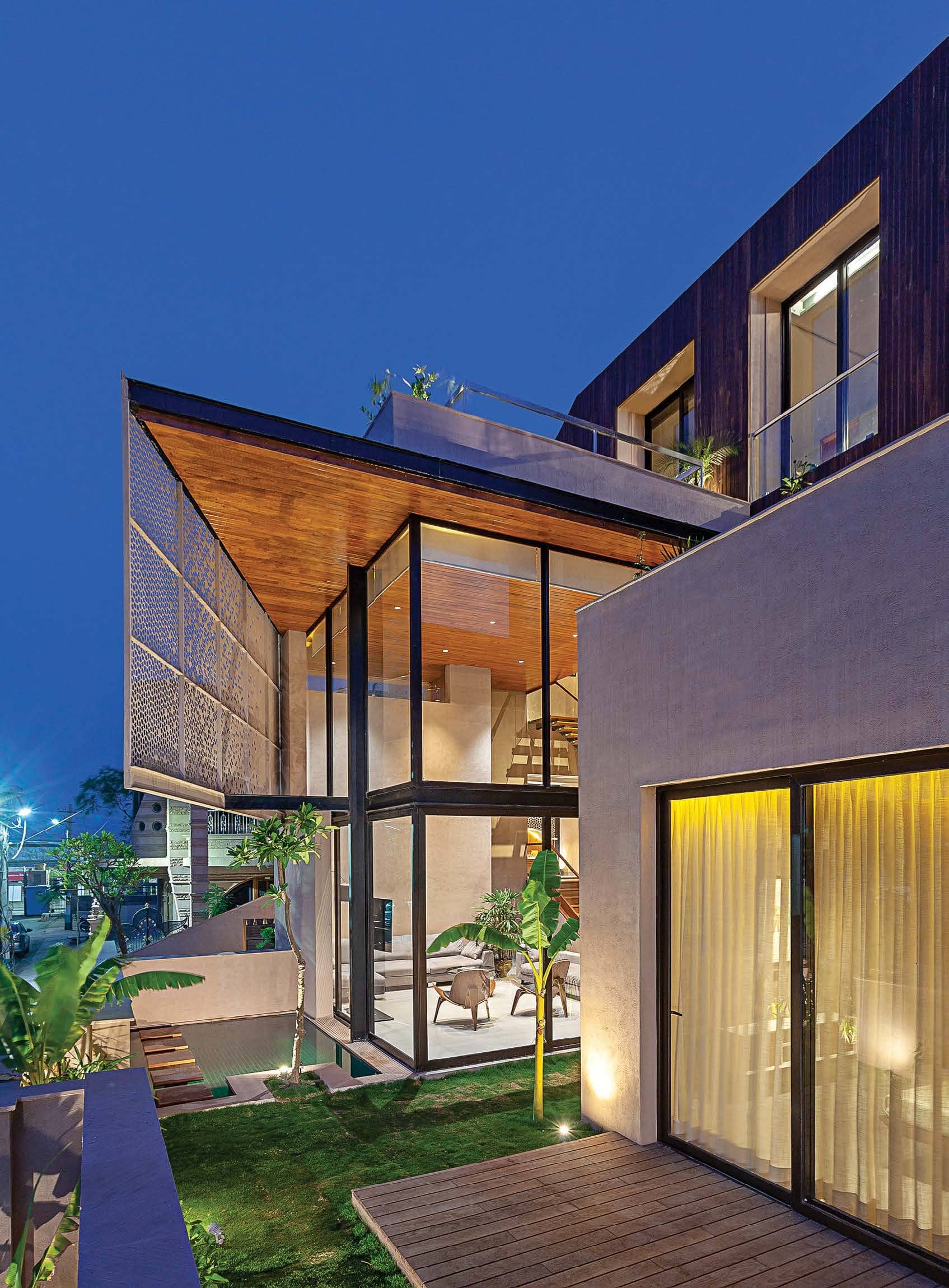 The imposing facade of this home in Jodhpur is almost reminiscent of the many palaces, forts and temples set in the stark landscape of the Thar Desert. The inside, with its little gardens, decks, waterbodies, sculpture court, sky lit balconies and terrace gardens, is even more so. The house uses architecture to combat the challenges of designing a home in a desert land. 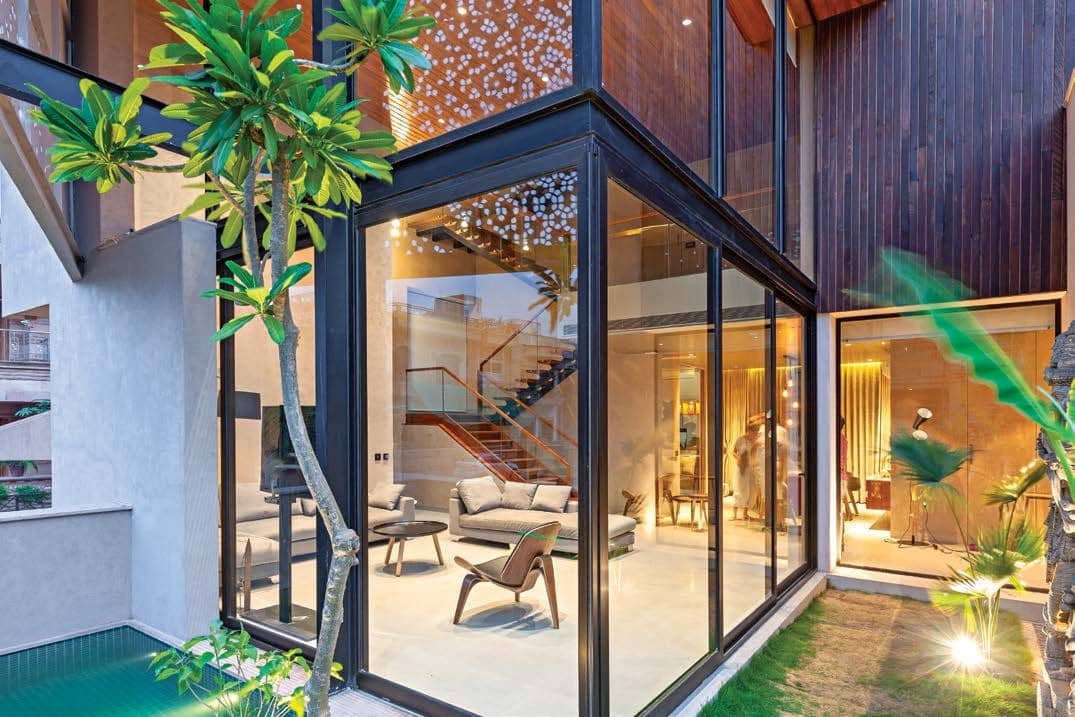 The restricted plot in a society scheme, encumbered with existing adjoining buildings along its compound walls on two sides, has two roads along its north and east sides. In a city where temperatures routinely exceed 40 degree Celsius, the iligree screen is both functional (protects from the sun and o ers some privacy) and aesthetic, a reminder of the traditional jaalis of the region. The screen gives the villa its character, as it combines the past (jaalis) with modern, clean lines. 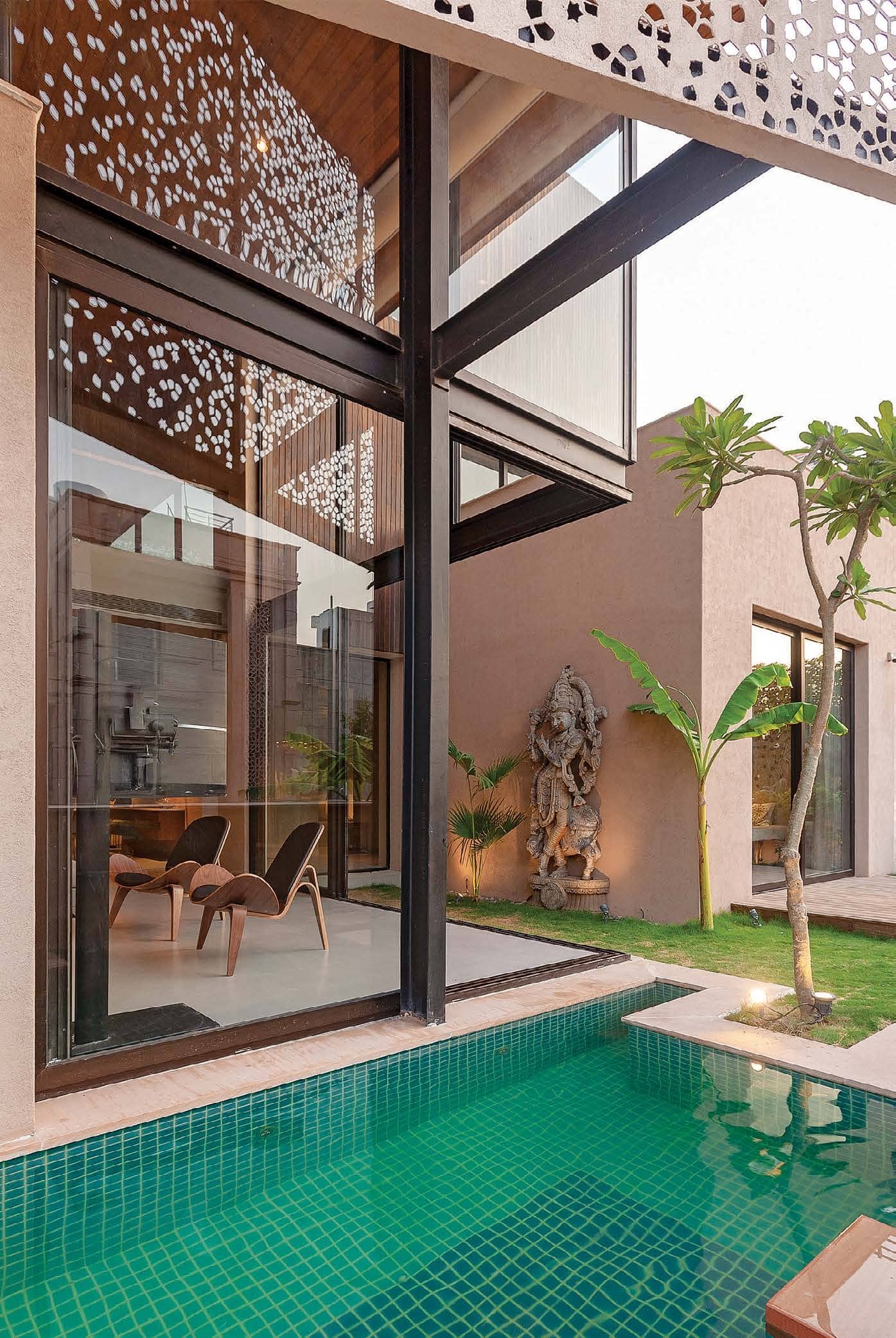 From the loating steps at the entrance to the open dining and living area and the landscape surrounding it, the home has an inviting appeal that takes on di erent auras during the day and night. Local Jodhpur stone was used on the entry steps, water bodies and compound walls. The outdoor paint inish matches the colour of Jodhpur stone and is used on some of the indoor surfaces as well, to add to the overall outdoor feel.

All of these elements have been sculpted out in this tiny plot, into an enticing piece of art that sprouts from the dry, desert land. 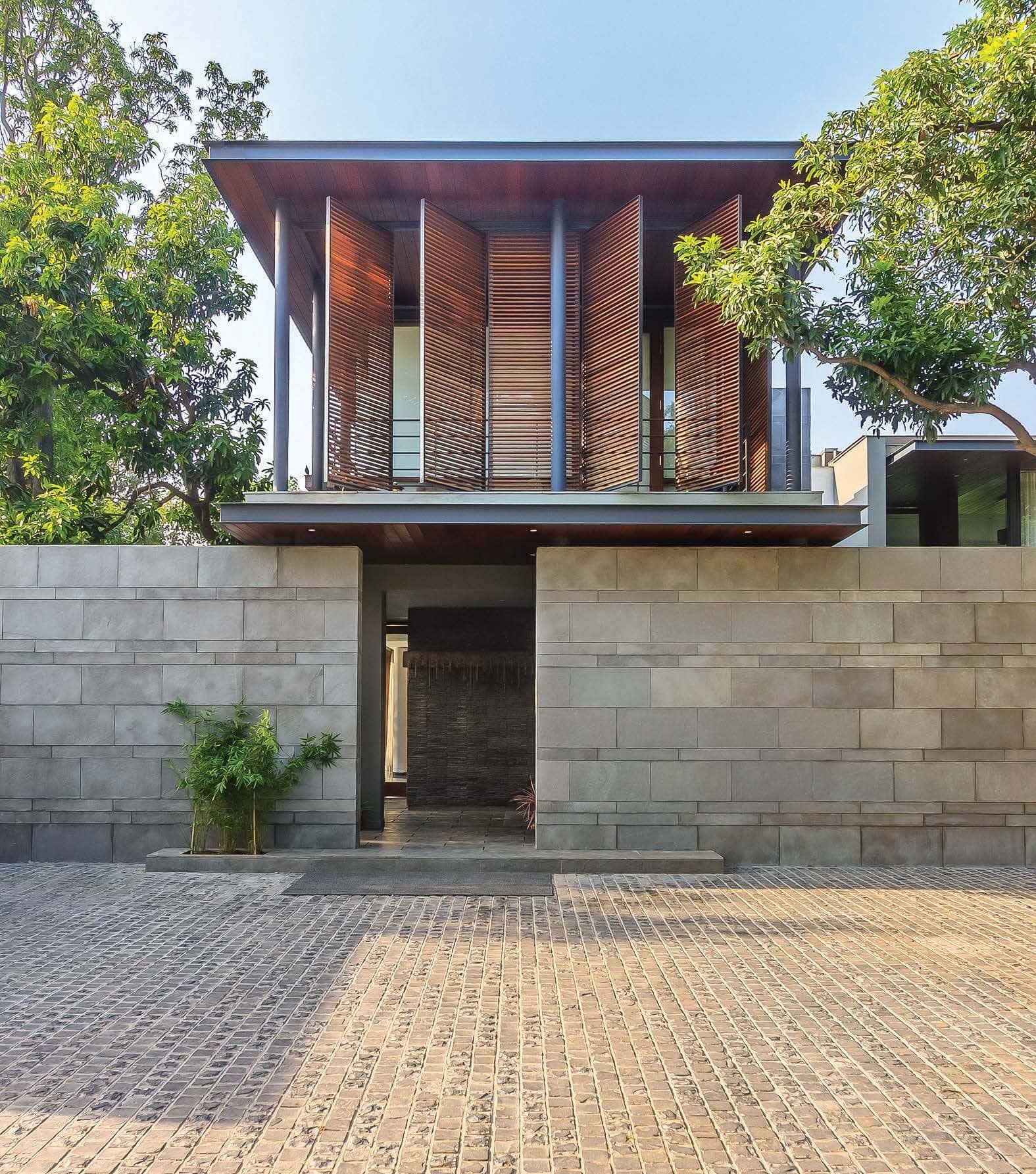 Faced with the task of designing a compact bungalow on the southwest corner of an acre of land in Chattarpur, the design team embraced all the challenges that came their way with this project. The farmhouse, built on a plot covered by mango trees, is the area’s latest luxurious address. 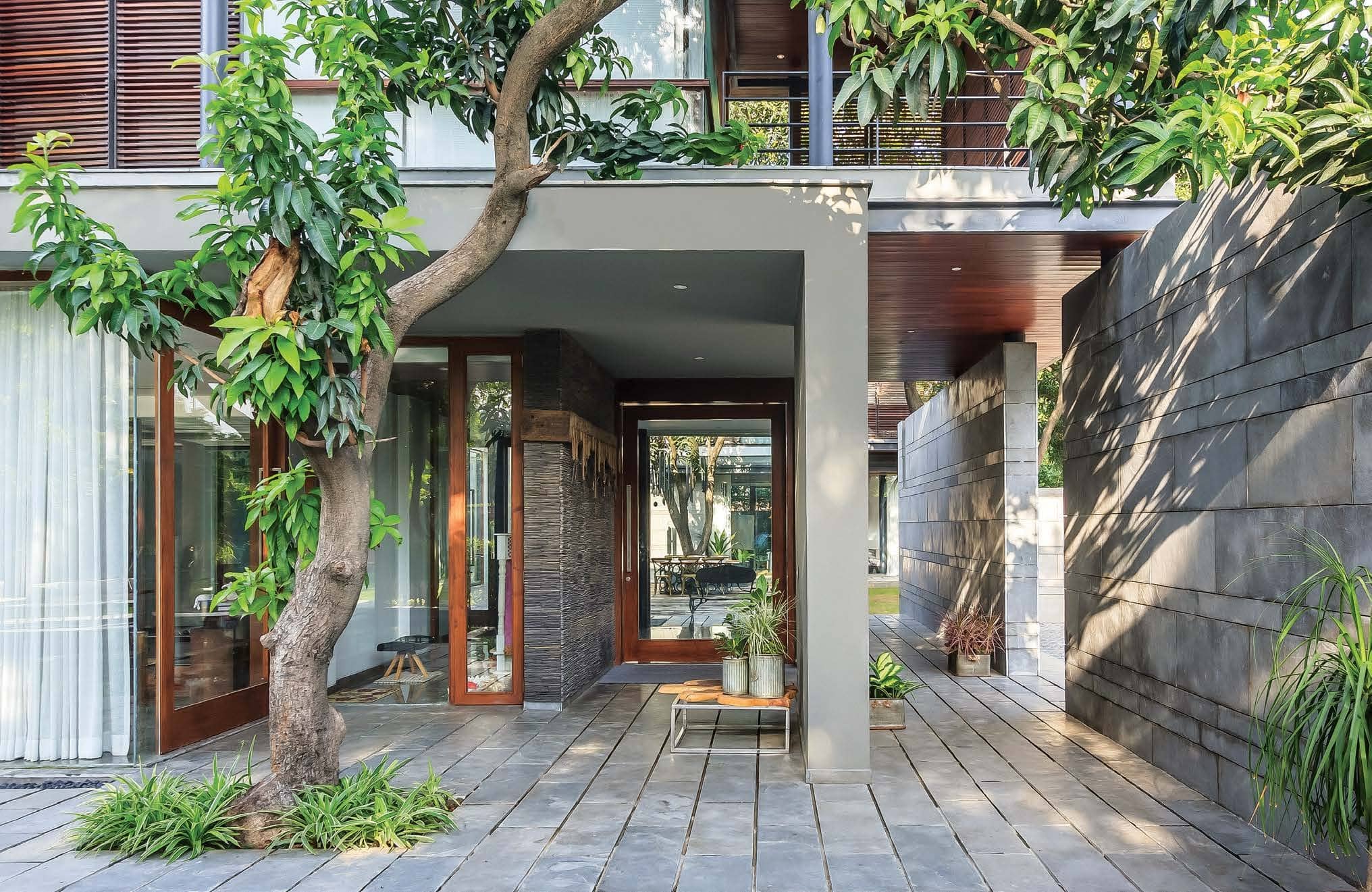 Three open courts and fluid indoor spaces find relevance in this nature-inspired bungalow. Arora and his team ensured that the vaastu edicts were met along with the inclusion of a lot of greenery for the residents to enjoy. They had to plan it in a way that would keep the surrounding orchard intact, and would not impact the trees in a big way. 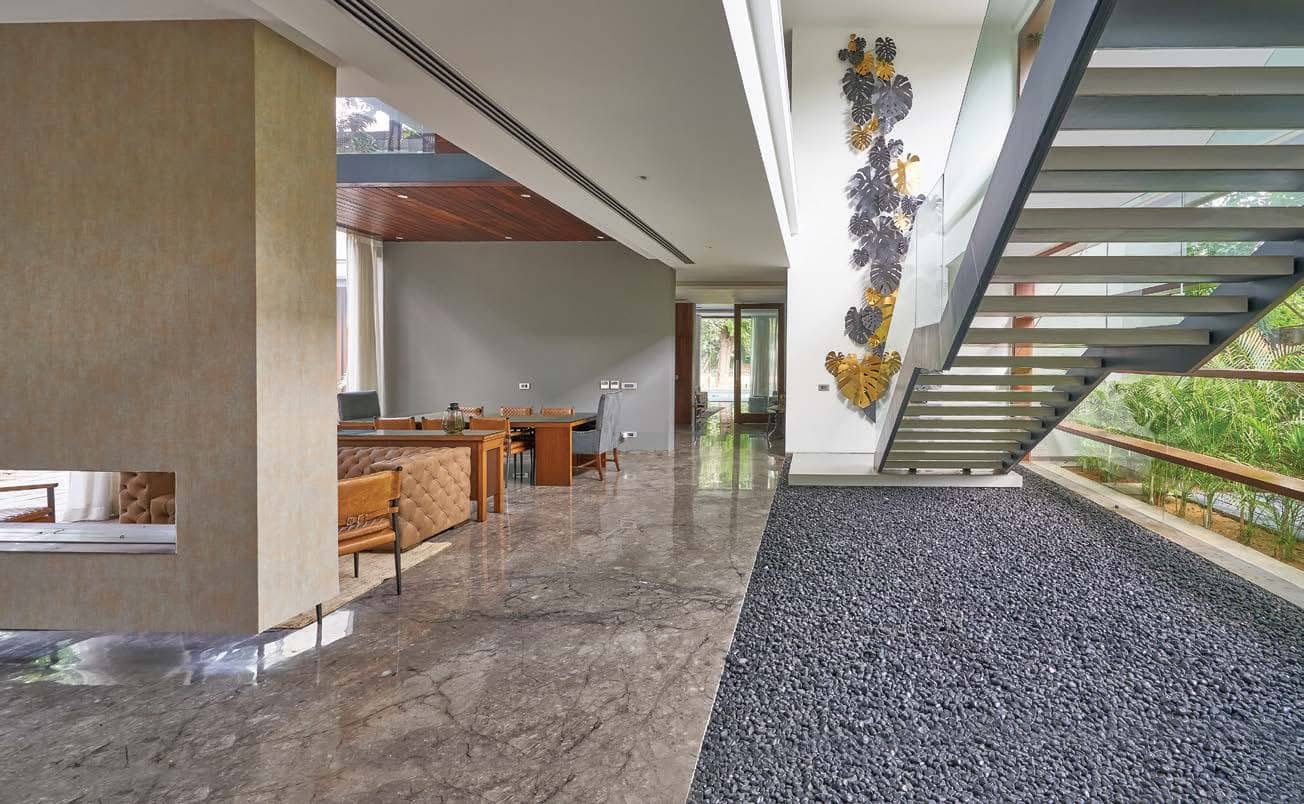 The house uses glass, stone, wood and steel to comfortably contrast the surrounding landscape in terms of colours and textures. Three interconnected garden courts frame the surrounding trees, with the central space forming the arrival court. The open courts are interconnected by labyrinth-like spaces, from the outdoor space to the rooms and then the pool. This progression from public to private spaces is an important design element of the house. 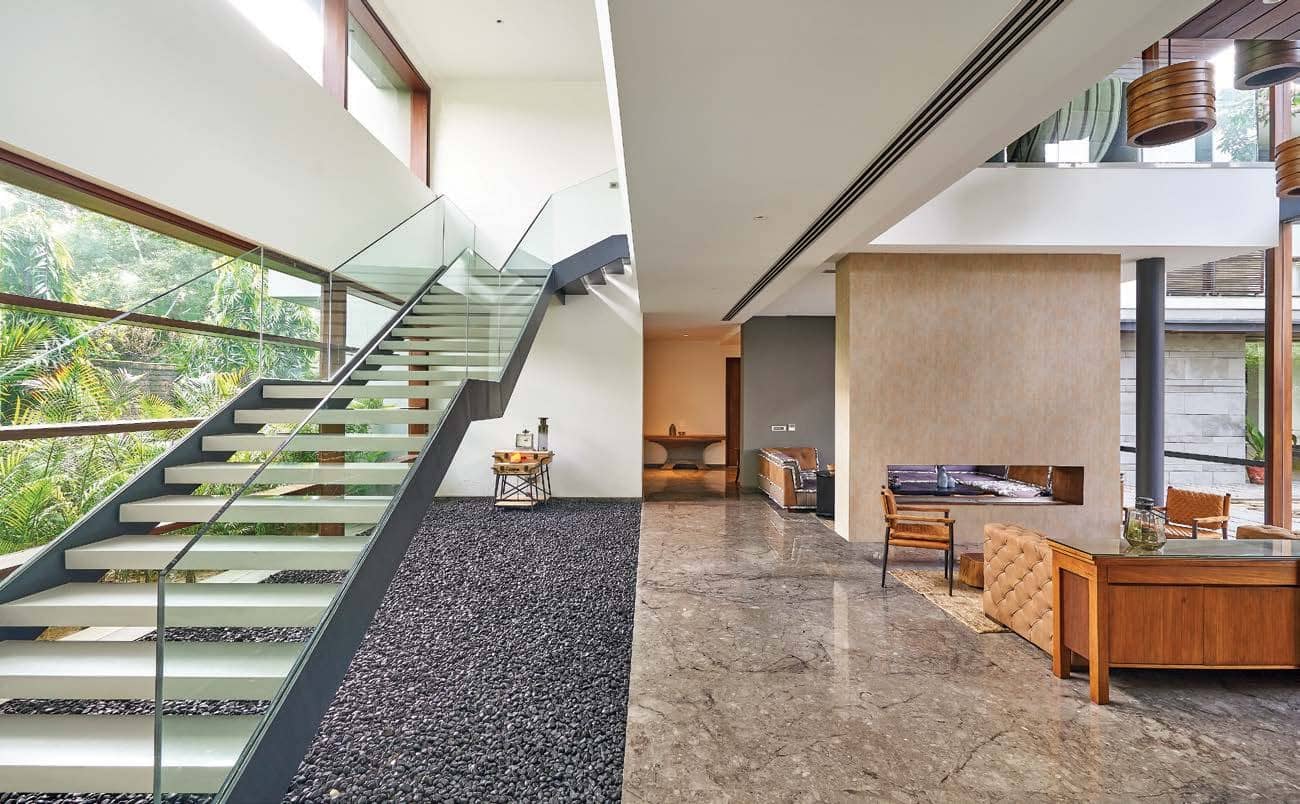 With the orchard playing such a large part in the final design, it’s safe to say that nature serves as one of the main inspirations for this home. 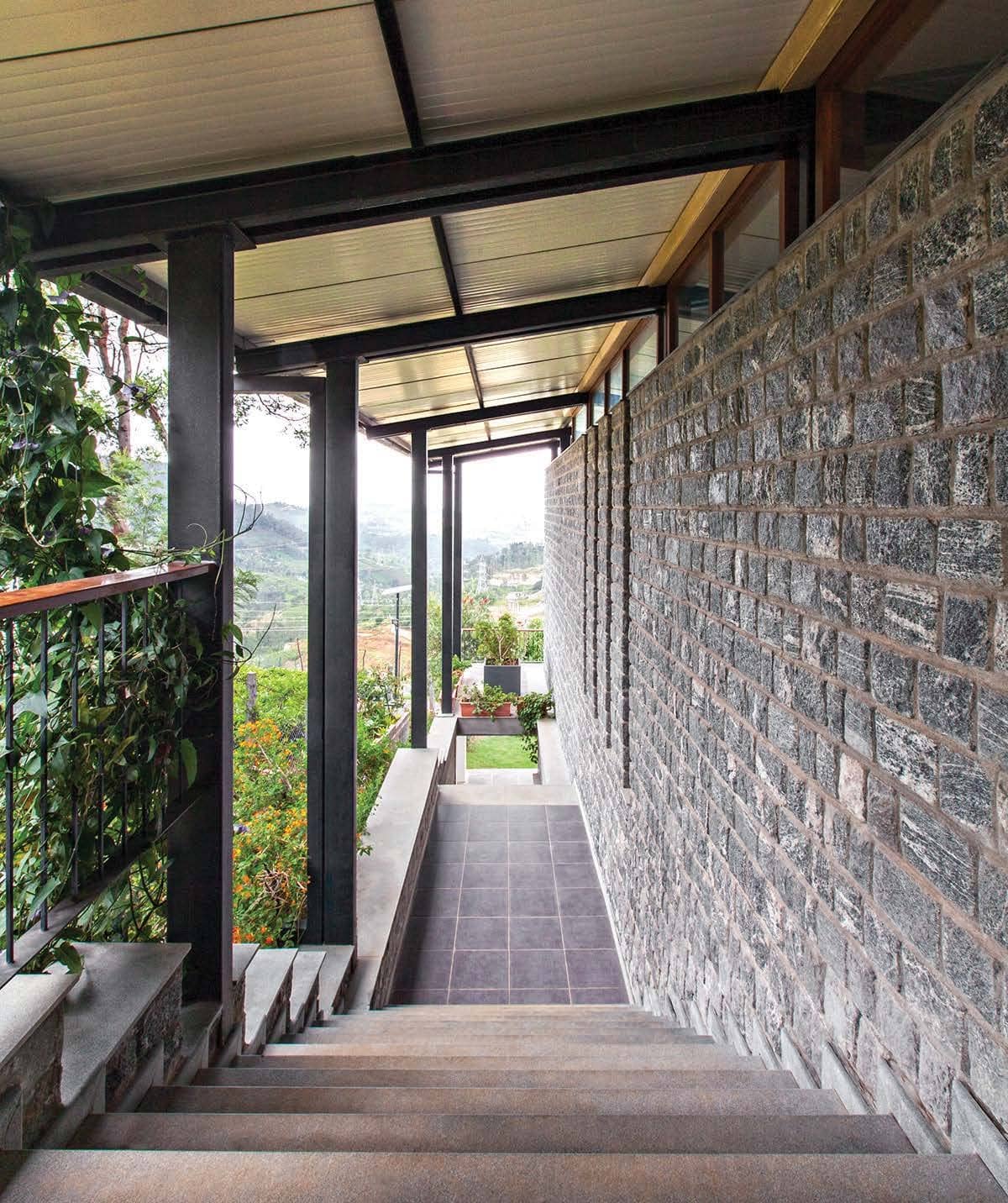 A true reflection of its site contours, Stepped House is a contemporary house in the hills designed for simple living. Nestled amidst lush tea plantations, sloping hills, fruit orchards and botanical gardens, the residence was inspired by its environs. 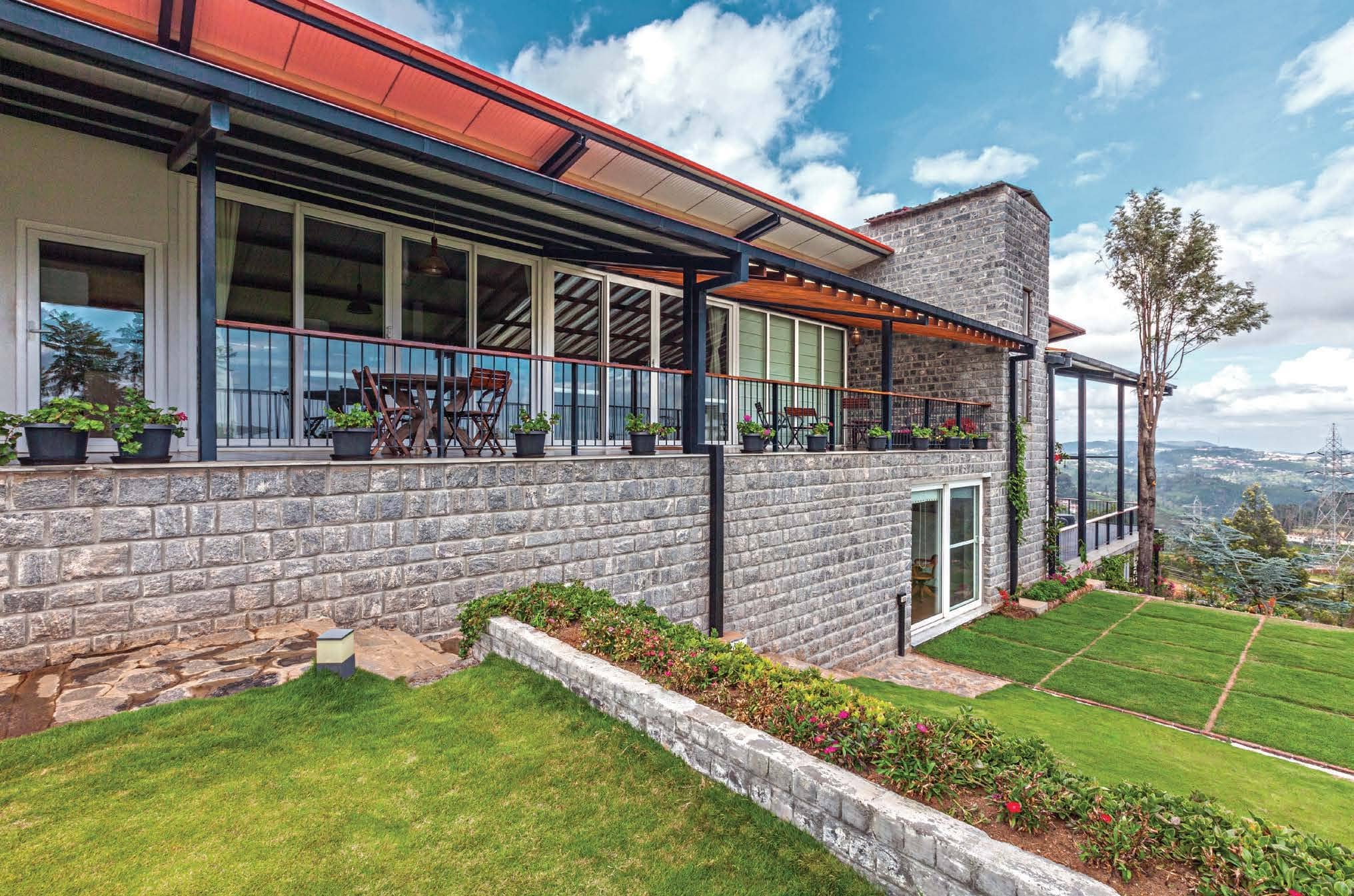 Conceptually, the house takes into account the site, weather conditions and local building style and materials. The sloped site makes the home seem like a one-level, horizontal development at first glance, but as one moves closer, the house reveals itself and its nuances, which greatly resemble the contours of the land. Consequently, the entrance to the house is at the top level, which houses the public spaces like living areas, library and kitchen, and the three private bedrooms have been navigated to the lower levels. An organic garden and landscaped grounds complete the site. 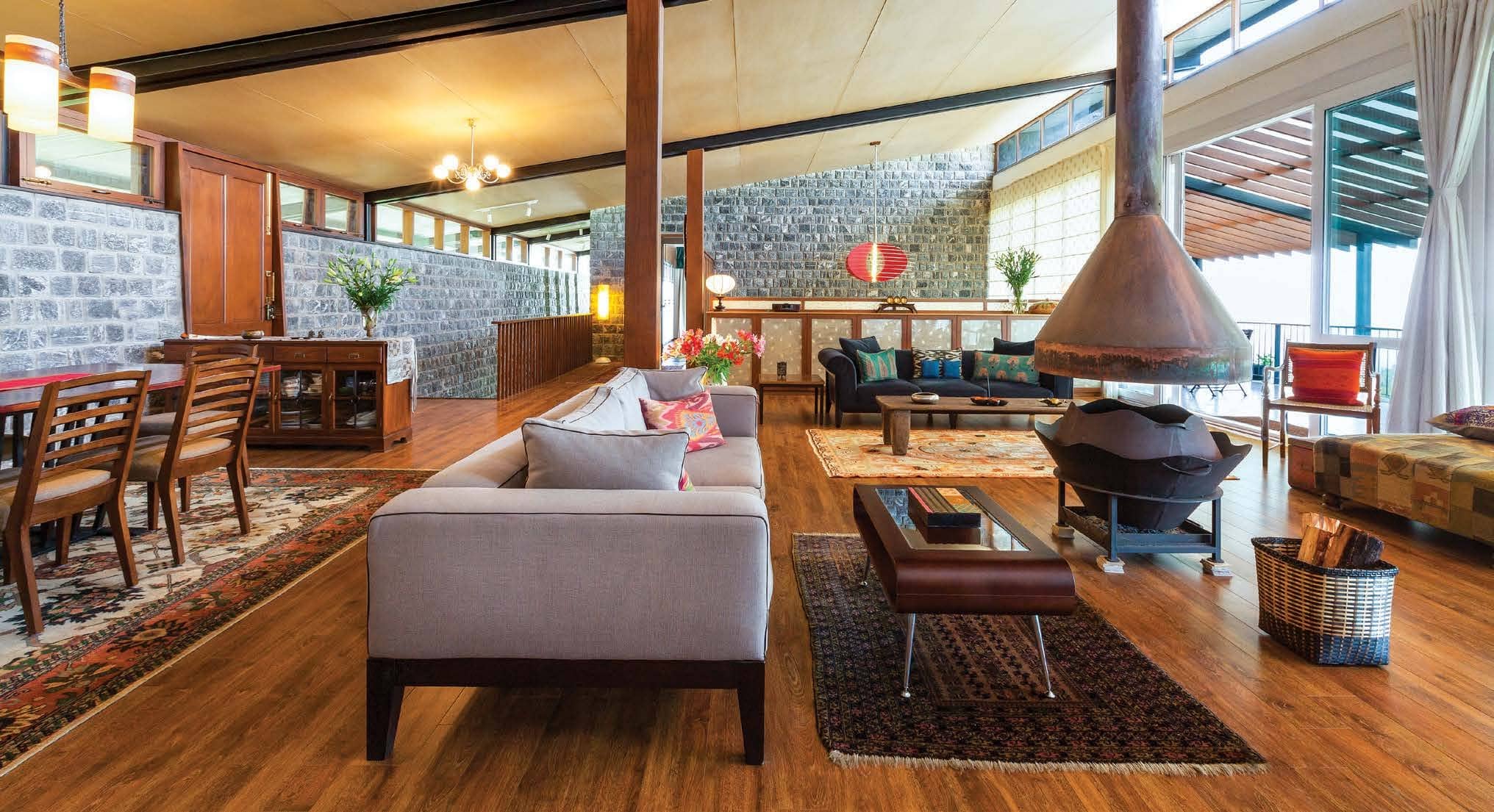 The cool climate of the hill station made it quite crucial to bring sunlight into the home; a requirement that went on to influence the now south-west orientation. The anchoring element of the home, besides the facade, is the ubiquitous stone wall, spotted in almost every room. 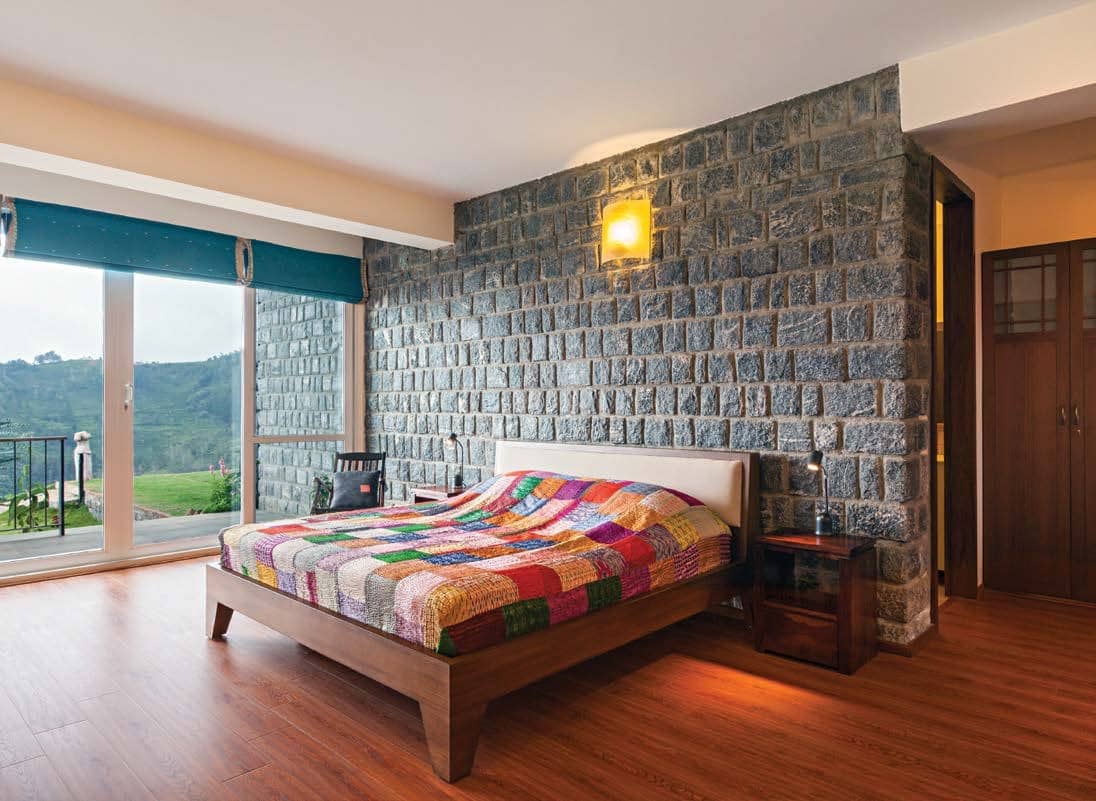