Bridging The Gap: Computation For Construction In India 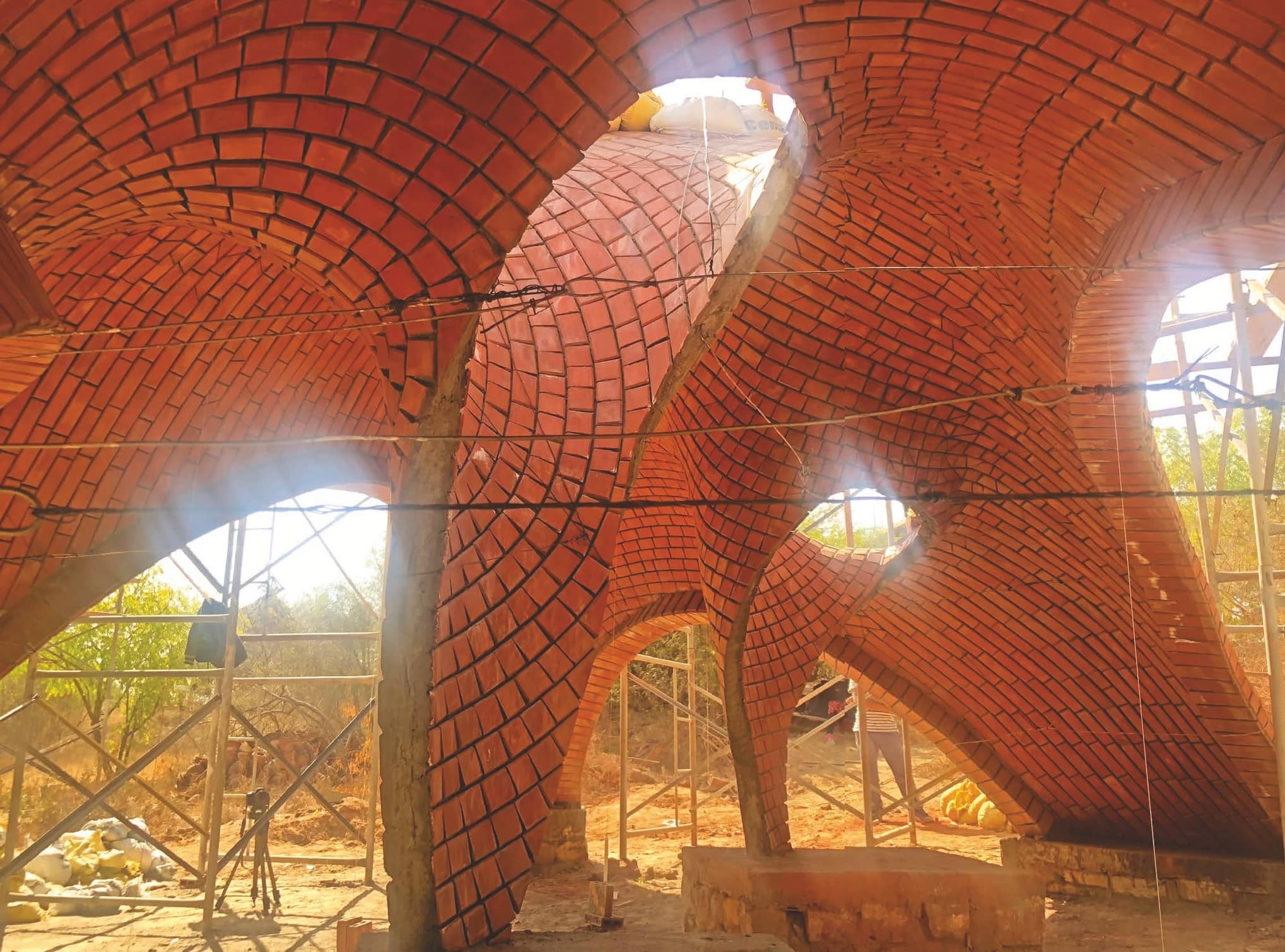 The processes of design development and construction are locally contextualised in different parts of the world based on the available technology and resources. This feature presents a craft-based approach to computation and its contribution to support artisans in India. Such solutions attempt to establish a methodology which makes complex geometry constructible in the country today, even when access to digital fabrication methods are evolving and expensive.

Urvi Sheth
In the era of the Second Digital Turn, designers and engineers have easy and equal access to computational tools across the globe. With the highest development of technology at a global level, the processes of design development and construction are locally contextualised based on the available technology and resources. A craft-based approach to computation and its contribution to support artisans’ development in India is demonstrated here through ongoing research on customising bricks and utilisation of a computationally generated asymmetrical Catalan Vault. The challenge of constructing the computationally generated form by architecture students is completed by the craftspeople and students of craft. The research elucidates gaps at various levels from design to construction. Craft-based solutions bridging these gaps establish a methodology which makes complex geometry constructible in present-day India when access to digital fabrication methods are still evolving and expensive.

Today, designers and engineers have easy and equal access to computational tools across the globe. Data-sharing and advancements in digital fabrication with a six-axis robotic arm have revolutionised design thinking and making. Robots are being trained to sense information, provide feedback on the process and take independent decisions, just as the craftspeople of the preindustrial era. The hands of craftspeople have had cumulative wisdom of materials, tools and techniques. A craftsperson’s hands are directly connected to their minds. When craftspeople are introduced to new ideas (in this case, complex geometry), tools and techniques (Catalan Vault), the construction process is as precise as machines. Additionally, a craftsperson posseses the knowledge and sensitivity to material, bringing an inherent quality without any preprogrammed instructions. This feature is a paper that is part of ongoing research on customising brick. It looks at bricks with two simultaneous yet separate approaches. The first approach: parts to the whole, focused on the development of customising a building block (brick). Individual masonry blocks are customised to enhance the quality of the existing brick. The aim is to make construction without mortar and/or add one of the qualities such as acoustics, thermal insulation, light and shadow on the facade, integration of the plantation, and so on. The customisation of the block can also be based on self-assembling complex geometries. The second approach: whole to parts, is based on a funicular structure. Here, the form is computationally generated and the parts are considered as standard blocks available in the market. The focus is to design and build an asymmetrical vault at an affordable cost in India. The project conferred here is built based on the second approach. 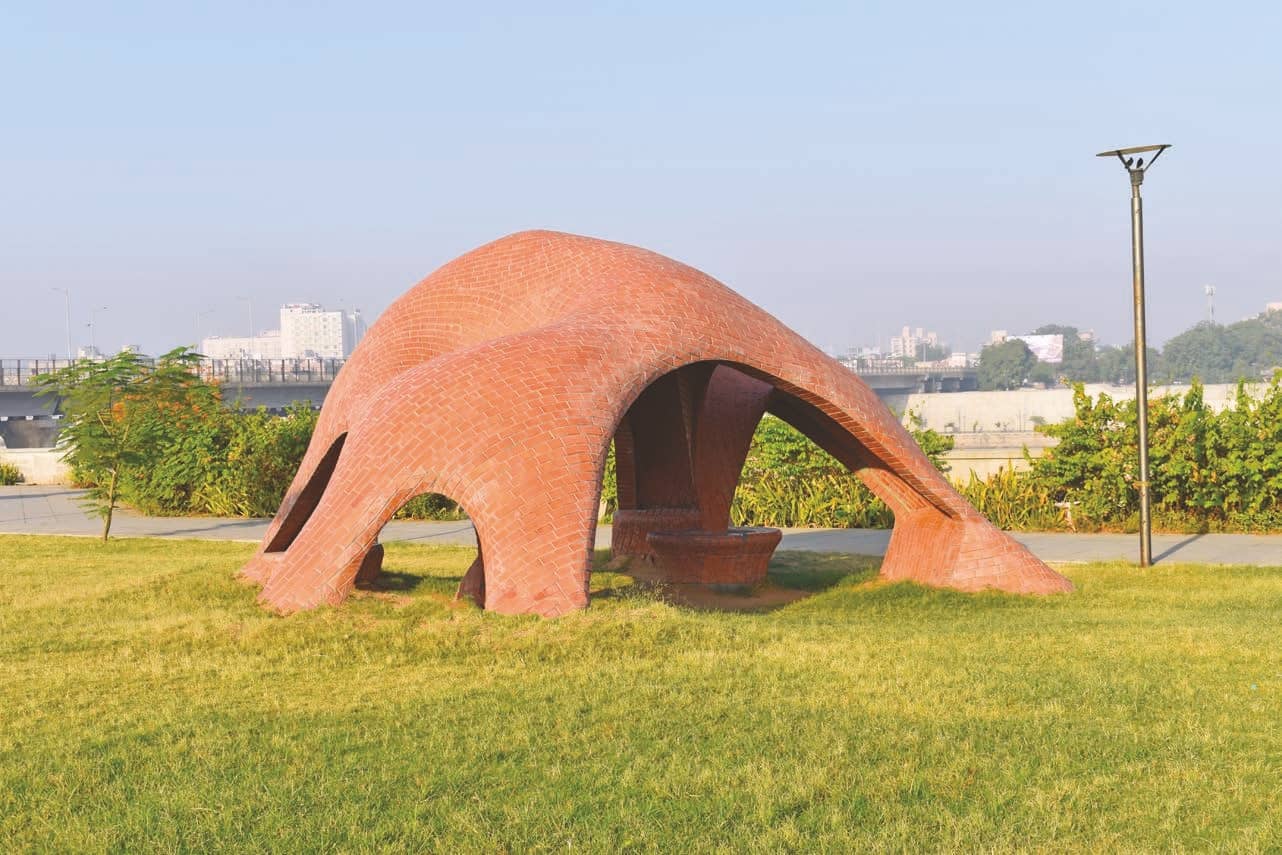 The project was conceptualised by students during a three-week-long (Winter School 2016) course, Digital Crafts: Customised Bricks 1.1, conducted at the Faculty of Architecture, CEPT University, Ahmedabad. Students were free to choose a specific site and programme on the Sabarmati riverfront. A bounding box was 30 cubic metres (3 x 3 x 3 m) in volume, with the possibility to stretch the box, keeping the volume constant. This changed to 270 cubic metres (10 x 6 x 4.5 m) while developing the design. RhinoVAULT, which is the Plug-In to Rhinoceros®, emerged from research on structural form-finding using the Thrust Network Analysis (TNA) approach to intuitively create and explore compression-only structures introduced as a generative tool. The number and type of supports were site-specific. Five different designs were generated by students working in groups of two. Out of these, the children’s play area was chosen to develop further. 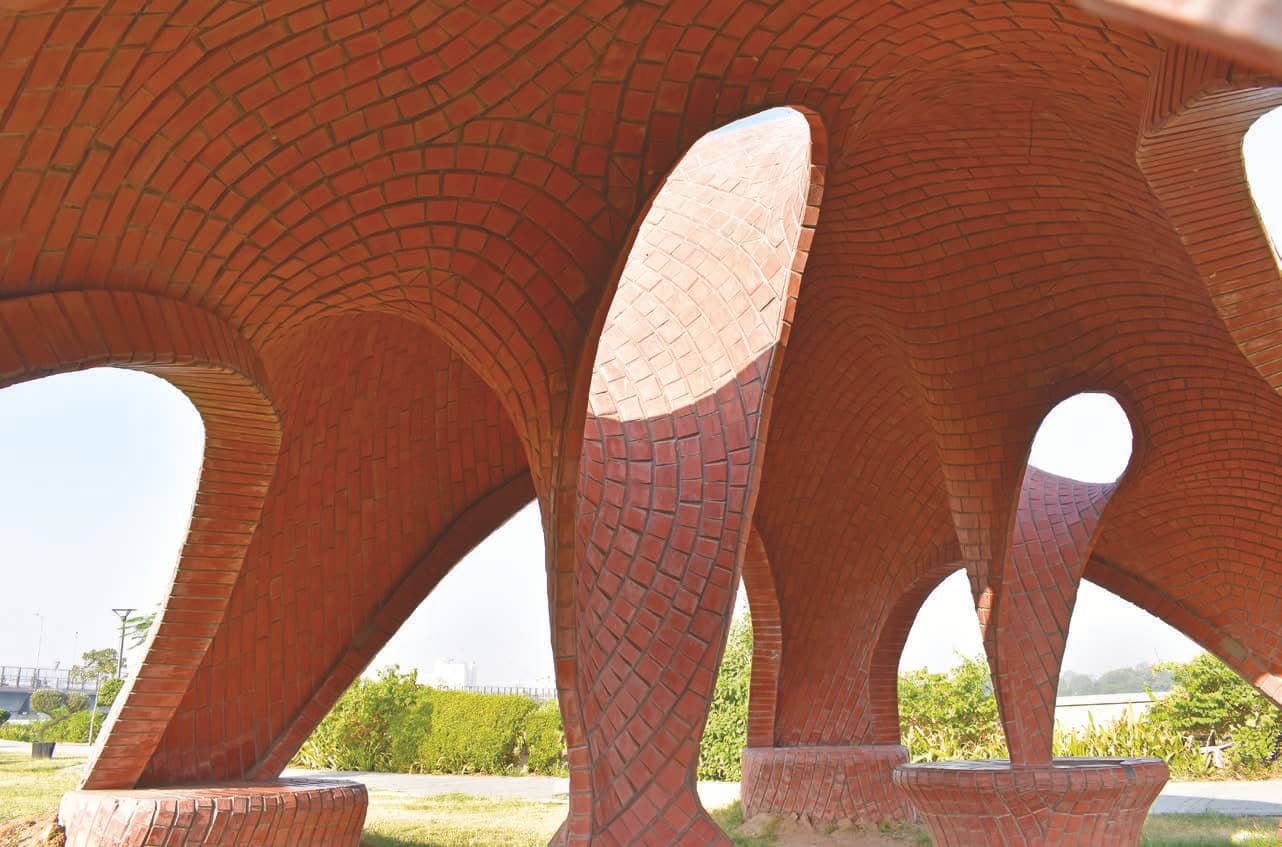 The plan footprint of 9.5 x 6 m with five boundary supports, two central supports and two cut-outs were fixed. Two central supports were used to include the details inspired by the teardrop columns (Frei Otto). The allowable maximum height was limited to 4.5 m. Height in some portions was further reduced to 1.8 m so that the children can climb on the roof and slide down from one of the central supports. The form was iterated until the headroom clearances were achieved with respect to the maximum allowable height, and the aesthetics of geometry were resolved.

A step-wise sequence of construction was referred from the IaaC pavilion (BRG). Step 1: Making a visual guide using cardboard; Step 2: Constructing boundary curves using scaffolding; Step 3: Building a masonry shell using MDF bricks between the boundary curves with a visual guide only (without scaffolding); Step 4: Begin construction from ground to top from all five outer support points; Step 5: Begin with central support once the masonry work from the outer support has reached the maximum limit of the cantilever without scaffolding; Step 6, Complete the masonry shell on the top.