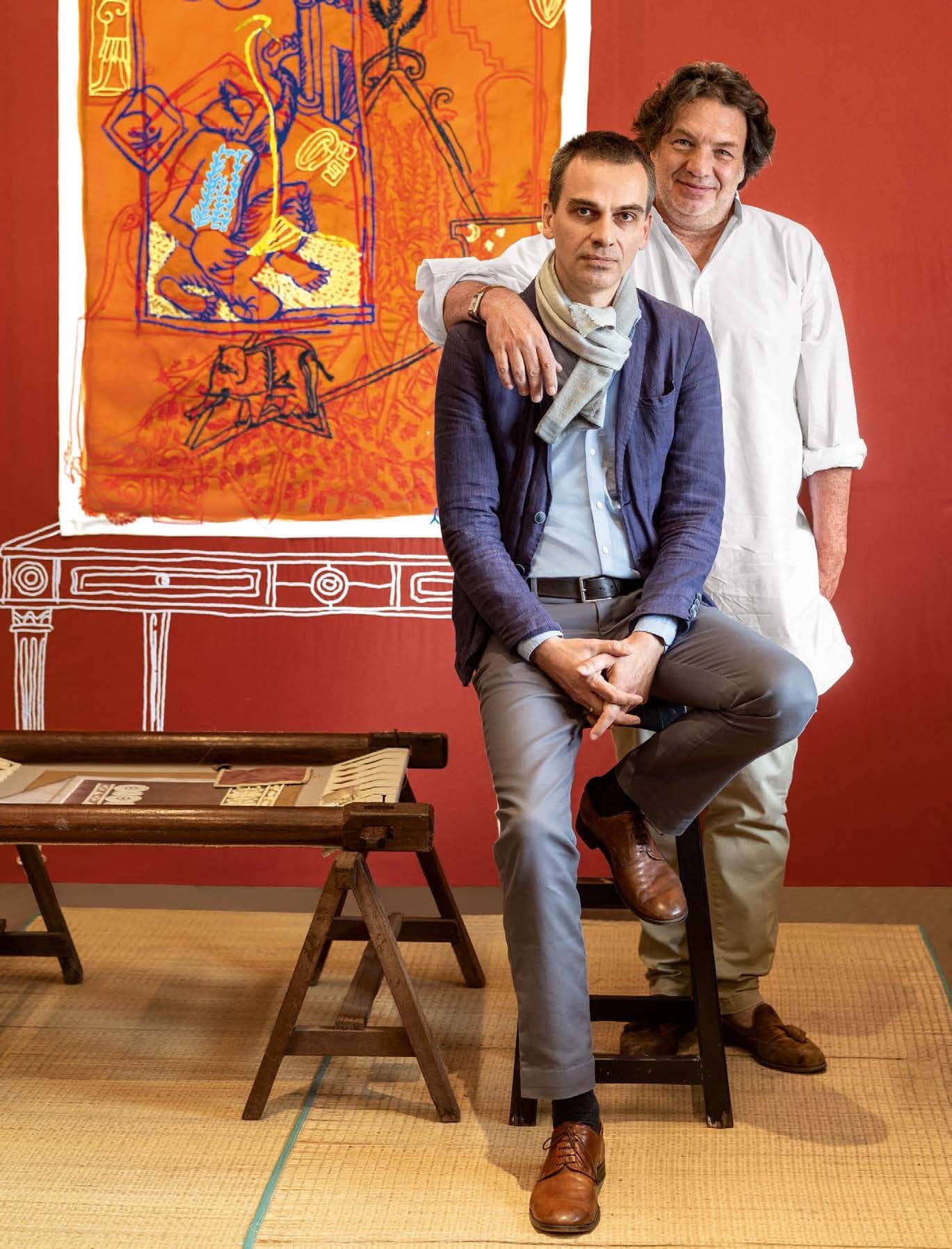 Architecture met antiques in this creative collaboration. Jean-François Lesage and Niels Schoenfelder discuss the concept and scenography behind the space.

Jean-François Lesage (JFL): I enjoyed the way we worked together. The tone of the voyage was set very quickly. Niels was clear from the beginning that we should speak a sensual language but using clear words so that people don’t lose themselves and it does not become a bazaar. There were 300-year-old objects next to three-month-old ones and it functioned because they expressed similar intensities which connected well.

Niels Schoenfelder (NS): The decorative arts, interiors, and architecture are all very closely related. You don’t need the deliberation once you have the idea established. Ninety-nine per cent of the decisions were clear. The atmospheric quality, the principal choice of objects, the laying out of the rooms, the lighting—they’re all elements you think about every day. It was important to let it come through that the exercise was based on Jean-François’s collection, which is very atmospheric.

JFL: My parents were collectors and I spent a lot of my childhood at auction houses, antique stores, and art galleries. When I began my career, I started out as an auctioneer (between the ages of 20 and 24), selling everything from contemporary paintings to classical furniture. I’m attracted to objects not for their value or their provenance, but more for the dialogue between them—objects and furniture, their shapes and textures and proportions, which would create a family, and, like any family, be full of diversity.

NS: It’s not an intellectual pursuit about being precise about the study of the history of art. All that is known, but you cannot reduce it to that. Because it is, after all, a personal collection. Jean-François lives with and among these objects. It’s not a room where he goes once in three months to revisit his holdings.

JFL: A room should not be a show window that tries to establish who you are or which strata you belong to. Every room is an intimate dialogue between objects, forms, textures and colours, which create a story, one that is written between the lines; it is not something obvious. The only rule is to please your emotions and your brain and to create a universe within a room, where, late in the night, when you switch offthe lights, the objects might talk together and share common stories hidden from human eyes. That is how I perceive an ambience. Things have to work together; why they work together is not very scientific.

NS: It wouldn’t work if you could explain it.

JFL: Exactly. In a cabinet de curiosités, what exactly is a curiosité? For example, last year, we had done a project for a German hunting palace in Moritzburg, [near] Dresden. The prince who built the castle had collected the most bizarre deer antlers and decided to keep the unexpected ones—those that looked like corals, ready-to-bloom flowers, dwarves, giants. So what is important is to keep things that have strong character, unusual ones that speak the same language, that shake your perception of what deer antlers should be.

NS: It was very important to not lose that quality of a personal, emotional resonance.

JFL: Our idea from the beginning was to create three clear universes. I still remember Niels’s words: “It should be clear, not too crowded, well lit; each object, or each group of objects, should appear as strata of universes clearly functioning together in three very clear ambiences.” We tried to follow the arrangement in my house.

NS: That’s essentially because you cannot recreate a house in a small exhibition setting. So all that you lose from the original space, you have to replace with something else for the visitor to still make sense of. That’s where these three spaces came from. We needed to group them in a way that viewers could start to spin their own stories. If we had only chosen the most valuable pieces and put them in a white box, as in a museum, it would have been very beautiful and valuable, but it would not have captured the spirit of how Jean-François relates to objects. It would have been bloodless and soulless. And that would have been a pity.

JFL: It would have been stiff. This wasn’t just an exhibition of objects; it was why one chair over another. I chose to show a chair that I found in a Bombay antique shop, extremely European in shape but Indianized in a beautiful, emotional manner and wrapped with tiny beads by people who must have found it a bit too boring. Such an object—which speaks a double language and makes you interrogate your first, second and third impressions— pushes you to look at a chair in a different way. That’s what we tried to push into that universe.