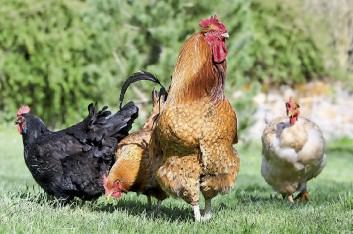 If you’ve spent time observing your flock, you’ve probably realised that chickens care little for democracy, having no interest whatsoever in ensuring each member has equal access to food and water or a good spot to roost. But yet, a flock, for the most part, lives in harmony. So how do chickens maintain social order?

A flock’s hierarchy is known as the pecking order, a term coined by Norwegian zoologist Thorleif Schjelderup-Ebbe. In 1904, the 10-year-old Schjelderup-Ebbe was put in charge of the family’s flock of chickens in Oslo. Having a fascination for the birds, he watched their behaviours, recording his observations in a daily journal. Through years of recorded data, he realised that there was a hierarchy within the flock.

He observed that chickens rank themselves in predictable ways. He discovered that rankings emerged from squabbles over food and ascertained that each member of the flock understood who ranked above and below it. He found that dominant chickens reminded their subordinates of their relative social status with a painful peck, hence the term ‘pecking order’.

He observed that the most dominant hen received certain privileges, for example, first access to food and water, the first choice of nesting boxes, roosting spot and dustbath. If another bird tried to impinge on these rites, she would quickly peck the offender into submission. Dominance wasn’t related to size: old, savvy hens were able to dominate larger, naïve birds. The second-ranking hen was able to peck any subordinate but dared not assert herself against the dominant hen. And so it continued, with each hen pecking those ranked below her and in turn was pecked by those above her.

Every member of the flock is included in the spectrum of dominance — no one is left out! The hierarchy of a flock isn’t cast in stone and changes as birds age, perhaps relinquish their position, die or new birds are added to the flock.

MORE STORIES FROM YOUR CHICKENSView All