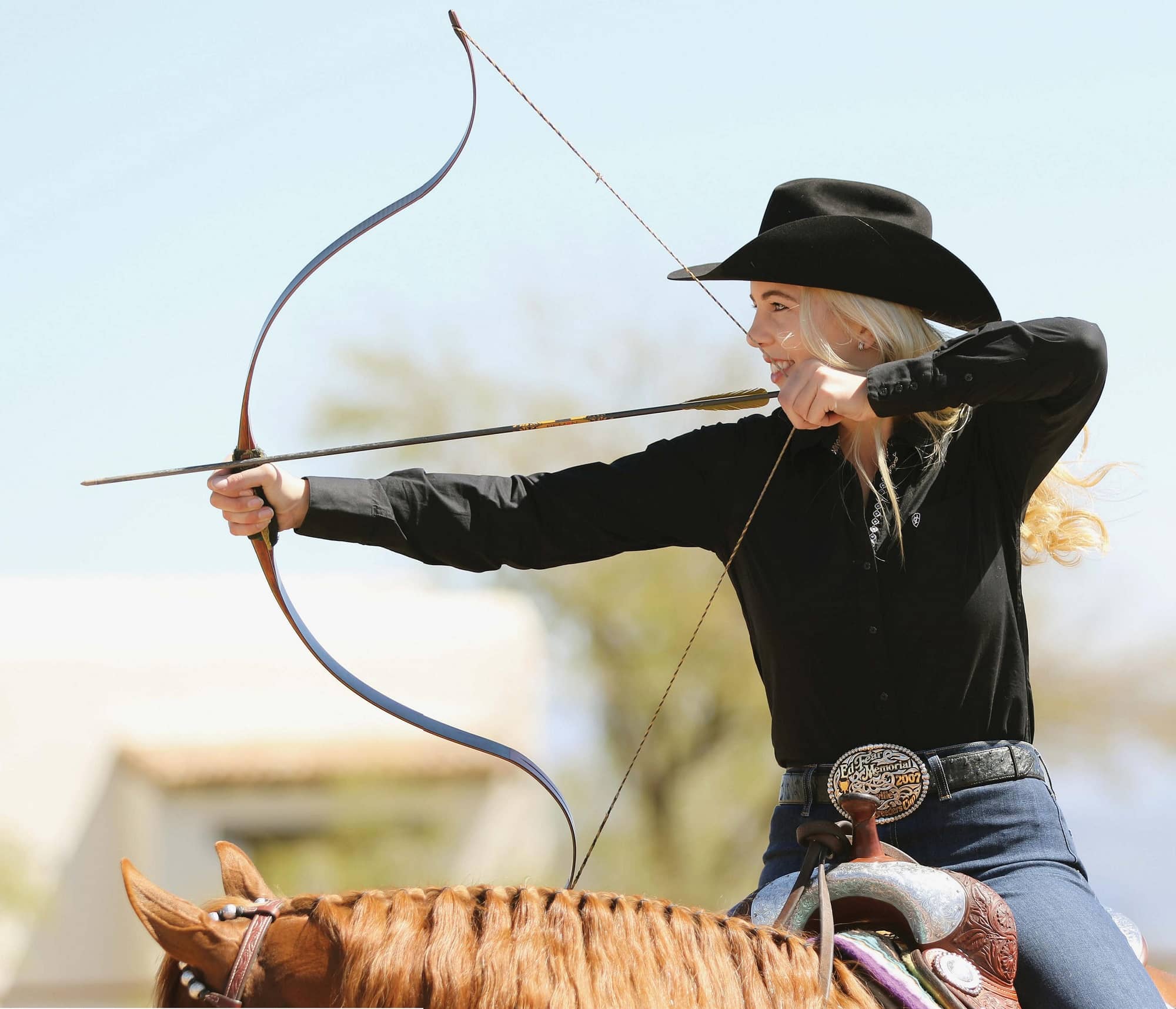 Whether Alex Bauwens is shooting arrows off the back of a horse or sliding to a stop, she’s documenting it on social media to connect with like-minded riders.

When you see Alex Bauwens’ Instagram page, you get the real deal. No filters, no Photoshop, just photos and videos showcasing her daily riding adventures. Sometimes it’ll be a video of her doing a trick shot off the back of a horse with her bow and arrow, other times she’ll have her drone in the sky to follow her as she treks through the untouched desert terrain, and occasionally you’ll see photos of her most recent artwork as a professional painter.

It doesn’t matter where she is or what she’s doing, Bauwens always finds a way to enjoy life from the back of a horse.

For as long as Bauwens can remember, she’s been horse crazy. Growing up in Northbrook, Illinois, her love for horses started at 3 when her mom, Julie, got a horse: an appendix Quarter Horse named Diamond Dancer.

“I was the kid that insisted on wearing their riding clothes to school,” Bauwens jokes. “Since then, my whole life has involved being around horses.”

From the first time she had a chance to sit on Diamond Dancer, horses were all Bauwens could think about. And to prove to her family that she had what it took to be dedicated to the sport, Bauwens began spending as much time at the barn as she could, pulling weeds and mucking out stalls. From there, she began taking jumping lessons and immediately fell in love with it. However, shortly into her riding career, her mom was in a riding accident that left her in the hospital.

“I still remember the accident like it was yesterday,” Bauwens shares. “For some reason I decided to drop what I was doing and run to the arena to watch my mom show. Right as I got there, I had this weird feeling, and when I looked up, I saw her coming around the corner and head toward an in-and-out fence. Her horse dropped a toe and stumbled to his knees, throwing my mom into the second fence, back first. He then jumped the second fence, nicking my mom’s face in the process. She had to be taken out of the arena by ambulance.”

After a full recovery, her family decided to trade the English saddle for a Western one and was introduced to the world of AQHA all-around events by trainer Diane Eppers.

The beginning of her all-around career started when Bauwens had the opportunity to ride AQHA high-point champion and All American Quarter Horse Congress champion, Sleepy Cloverdale—a horse many riders could only dream of riding. By the ride's end, her family was hooked, and shortly afterward, Bauwens got her first horse, Just A Kiss Of Class.

“‘Ladybug’ was only 3 when we got her and she only did the Western pleasure,” Bauwens says. “She taught me a lot because I had to learn how to do the all-around with her.” Their ability to work as a team showed, and Bauwens and her horse went on to place at some of the top events in the country, including a third-place at the Congress. But her favorite win came from an event Bauwens and her mare typically didn’t enter in.

“I remember being at a horse show and seeing the trophies they had on display—they were beautiful sculptures. I found out they were for a halter class, and I decided I was going to show my little horse against all these real halter horses,” she says with a laugh. “When I told everyone I was going to enter that class, they looked at me like I was crazy. I ended up winning grand champion mare and took home eight trophies.”

MORE STORIES FROM HORSE AND RIDERView All