Wilson has her eyes on the prize 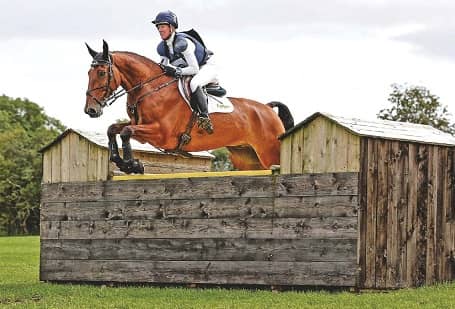 NICOLA WILSON brought a team of talented young horses to her local event and left with a bounty of ribbons and prizes.

She headed one of three intermediate sections with Helen Scott’s Hawk Eye, the pair adding a smattering of time-penalties in both jumping phases to a dressage score of 30.5.

“It took me a while to get to grips with his dressage, but he’s a very good jumper,” said Nicola, who has spent much of the past year regaining her strength after a serious tumble in Belgium in June 2019 that left her with four broken vertebrae in her neck.

“I didn’t compete again after my fall and just about managed to get a couple of runs in March before Covid struck,” she said. “In hindsight, lockdown did me a favour as it gave me the chance to work hard on my own fitness, and the horses all benefited from the extra attention.”

Hawk Eye was acquired by his owner as a result of a financial legacy left to her and a small circle of friends by another close friend who died in 2017.

“I decided that I had one last event horse left in me, so I used my share to buy ‘BB’ from his owner/breeder, Peter Smyth, in Northern Ireland,” said Helen, who has competed to BE100 level in the past. “I pottered about making sure he had the basics, but when it became apparent that he needed a better rider than me, I asked Nicola to assess him and she agreed to take him on a two-week trial. That was two years ago!”

Nicola also finished second in another intermediate section on Levitate and topped the open novice leaderboard on Chiraz III.