Potato production is a high-risk, high-reward industry. Farming seed potatoes is even more so. Sabrina Dean visited Gerhard Bruwer of Genade Boerdery in the Northern Cape to find out more about this component of the family farming operation.

Gerhard Bruwer plants his potatoes only in virgin soil, and his intention is never to plant any piece of land to potatoes more than once in his life.

“If you look out across this bush, where it extends beyond those koppies, that is all virgin land that will be cleared for planting over the next 30 years,” he says.

One of the major reasons for this approach is that as a seed potato producer, he needs to guard against the risk of disease.

Bruwer farms with his father, Vickie, and his two brothers, Hannes and Vickie Jnr, in the Pixley ka Seme District Municipality in Northern Cape. The business is spread across three farms, with Gerhard based near Douglas, Hannes near Hopetown and Vickie Jnr near Schmidtsdrift. Vickie oversees the entire operation.

Genade Boerdery employs 11 managers and about 120 permanent staff, as well as providing seasonal contract work to about 200 people over the three months during which the potatoes are harvested. The potato enterprise comprises only 5% of the Bruwers’ cropping activities, but contributes approximately 15% of turnover. However, the crop has by far the highest input costs.

“These include market commissions, transport to market, labour and so on, so you’re looking at R200 000/ ha,” explains Bruwer.

Other costs include water and electricity, seed, chemicals and fertiliser, and mechanisation.

Bruwer says the high input cost is one reason he plants more than just potatoes.

“Potatoes and pecans are my most profitable crops. Potatoes are high risk, but high reward. That’s why I diversify; it’s good for my rotational system, but also to protect me if there’s trouble.”

Turning to the benefits of rotation, he says that any crop can do well on a land previously planted to potatoes, as potatoes do not utilise fertiliser effectively. A farmer therefore needs to apply a large quantity to ensure the plants absorb enough, which means that much fertiliser remains unused in the soil.

“For the next three years after the potato crop, the soil remains well fertilised,” he says. 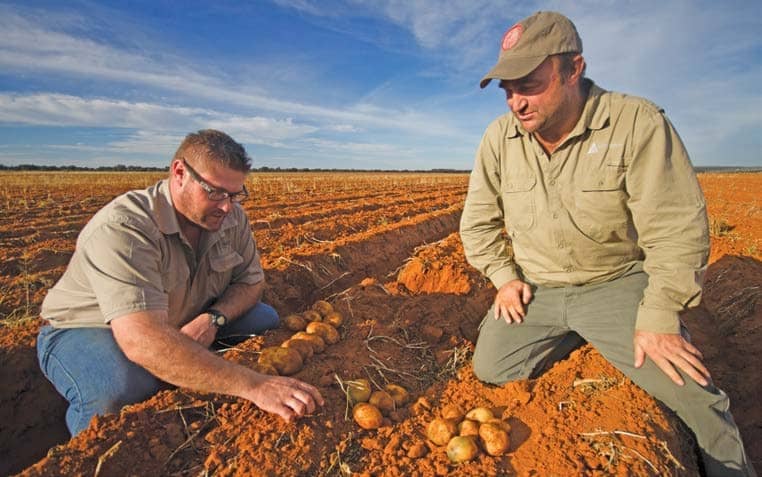