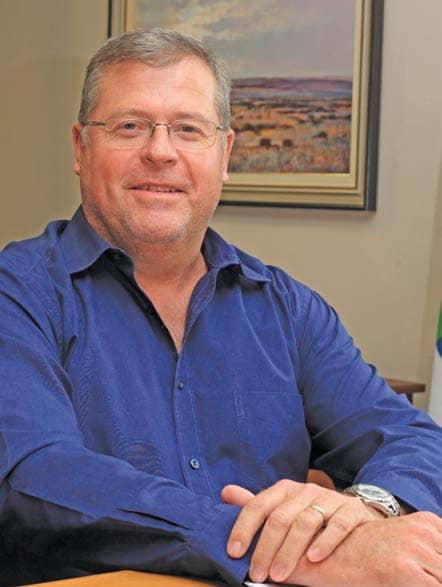 Jannie Strydom took over the reins as CEO of Agri Western Cape in March, after the retirement of Carl Opperman, who served in this position for 20 years. Strydom spoke to Glenneis Kriel.

HOW DID YOU BECOME INVOLVED IN AGRICULTURE?

I grew up on a farm in Vryheid, and studied agriculture after school, doing my master’s in agricultural economics at the University of Pretoria. My first job was at the National Department of Agriculture, from where I moved on to lecture at Glen Agricultural College and work as an agri specialist at various financial institutions.

More recently, I managed a co-operatives development programme on behalf of a US co-operative funded by USAID, with the aim of empowering black agricultural co-operatives in the Eastern Cape and Northern Kwa-Zulu-Natal.

WHAT INSIGHTS DID YOU GAIN FROM YOUR WORK WITH THESE CO-OPERATIVES?

It was astonishing to see what many farmers were accomplishing in spite of a lack of funding or training, and it made me realise the great success that could be achieved if resources were better aligned to meet their needs.

The work also highlighted the great potential of co-operatives to empower farmer and other community groups when founded for the right reasons and based on sound business principles. Through improved economies of scale, co-operatives, when used correctly, result in better negotiation power. This can translate into numerous benefits for members, such as greater efficiencies, lower input costs and more favourable market access and prices.

WHAT ARE SOME OF THE CHALLENGES OF BEING THE CEO OF AGRI WESTERN CAPE?

Time management is difficult due to the time-sensitive nature of agricultural production and because of the need to fit so many people into a really busy schedule.

To illustrate this, we pushed for water restrictions to be removed or at least reduced as soon as it seemed that water levels were improving during the drought in the Western Cape. This was done not only to alleviate the impact of water shortages on agricultural production and the entire supply chain, but also because of the negative way in which lower production and farm margins affect job creation and rural economies.

Besides this, the CEO needs to juggle and understand the politics, interests and issues of a wide variety of stakeholders, from government departments, such as the Department of Agriculture, Forestry and Fisheries, and the South African Police Service, to various interest and grower groups representing anything from rooibos to red meat and wine grape producers. It’s not a one-dimensional job, so one needs to have a solid background in agriculture.