Driving: A Sport For All Seasons 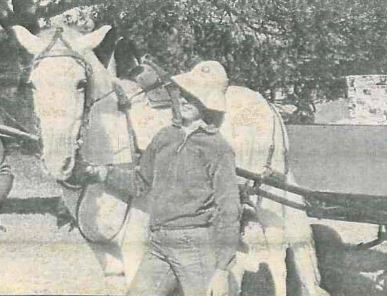 41years ago Mastering the skill of driving horses takes time and practice. But many people do it for fun, as well as competitively.

The driving community in South Africa, predominantly in the Transvaal, is composed of true amateurs. Theirs is sport for the fun of it, with a great ‘togetherness’ among the participants.

The sport of driving horse-drawn vehicles goes back some 200 years, and since time began horses have been used for drawing some form of vehicle or another. During the golden era of the Roman Empire, chariot-racing was one of their most popular sorts. As time progressed and with the advent of macadamised roads, driving for pleasure, as a sport and as an art, developed.

From the coaches, smaller vehicles were created, such as the phaeton, the cabriolet and so on. Other vehicles that drivers in South Africa can be seen driving are Mills wagons, rally cars, Viceroy show wagons, dog carts, Cape carts and training carts.

Most of these vehicles are of historical origin and have been unearthed in out of the way places by their owners, who have lovingly worked on them and restored them to their former glory and elegance. The background to many of these vehicles forms a story in itself.

The turnout of these carriages and carts is of utmost importance, and the drivers take a great deal of personal pride in the presentation of their equipage, gleaming harness, and beautifully groomed horses.

The pleasure of driving is becoming an increasingly popular sport and as one of the FEI-recognised disciplines, it is drawing an ever-increasing following both overseas and, happily, now here in South Africa.

For some years the driving community in the Transvaal has been growing and it is now firmly entrenched, with its rules included in the SANEF National Rule Book, and guided by an enthusiastic Transvaal Horse Society Committee.

A day of good, healthy fun took place earlier this year when 15 horse-drawn vehicles of varying types set out from the home of Mr and Mrs Theo Loaros of Glenfernesse, near Kyalami. They followed a route across the veld and circumvented the M1 motorway to picnic near Halfway House.