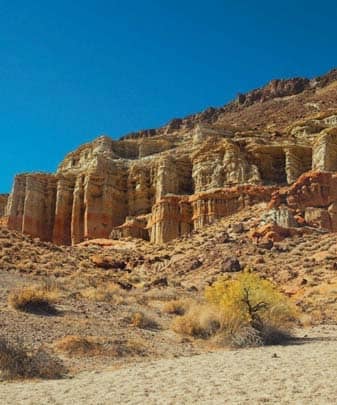 Recreating a scene from the Old West for the world of make-believe, I saw firsthand just how crucial real-life horsemanship skills can be.

Martha Crawford
Dakota Incident (1956) is a movie that stands out in my memory---not for its quality and popularity, but for a lesson I learned during its filming.

I had been hired as the stunt double for the film’s co-star, Linda Darnell. By this time, I was well into my career as a stuntwoman and my specialty was working with horses. Almost all of Dakota Incident was shot on location in what is now Red Rock Canyon State Park on the northwest edge of California’s Mojave Desert.

On the appointed day, a limo came to take me to the Mojave set. When I climbed in, Dale Robertson, the male lead, was sitting in the back seat. We were the only passengers for the three-hour trip.

Soon to star in his own hit TV show Tales of Wells Fargo, Robertson was perfect for the Western genre. Not only did the tall, handsome actor look like a cowboy, but he was born in Harrah, Oklahoma, where he worked with horses from an early age.

Naturally, it did not take long for our conversation to turn to horses. I still remember Dale’s charming Oklahoma drawl as he told me about his fascination with the real-life story of Justin Morgan. The long drive flew by as we talked about the famous progenitor of the Morgan breed.

When we arrived at the film set, preparations were underway for a pivotal scene in the movie, which involved a runaway stagecoach and wreck. The script called for a stagecoach to be attacked by Indians. The driver would “lose” control of the horse team, which would bolt downhill with the coach until it wrecked. Then the survivors would escape and seek refuge in a dry gully while the coach was burned.