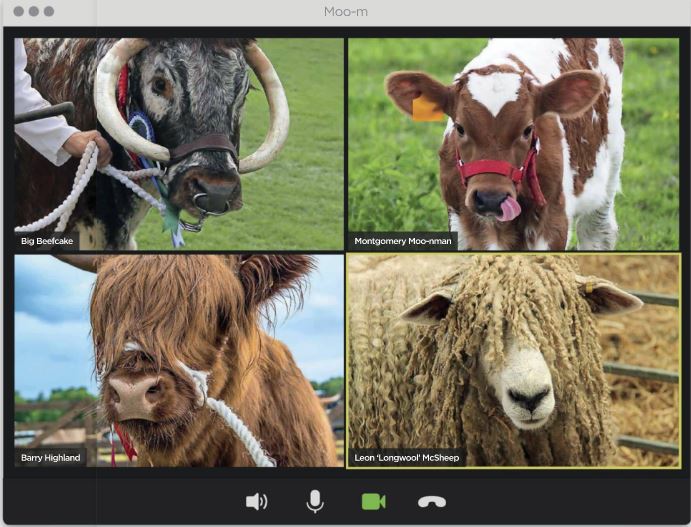 With UK shows scuppered by Covid-19, Helen Babbs discovers that there is still plenty for livestock-owning smallholders to look forward to — virtual showing from the comfort of your own farm

As Covid-19 spread across the UK this spring, agricultural shows were forced to cancel. But this sad state of affairs didn’t last long for some as enterprising farmers and smallholders went virtual to save their summer fixtures. Events large and small are now taking place online using photograph and video entries.

“We thoroughly enjoyed the experience,” says Sarah Barnes, a Red Poll cattle breeder who entered the RBST’s Greatest Online Agricultural Show in May. “We scrubbed and polished our cattle so that they would look their best. We put halters on them and we dressed in our white coats as if we were actually at a show. Come judging day, we waited excitedly for the results, and our boy Hopeham Jabari was reserve champion. We love to show and what’s happening now has made a somewhat nonexistent season much better.”

Kayley Kennedy, show organiser for the Beltex Sheep Society, believes that online shows are “fun” and that they have acted as an effective shop window for breeders for forthcoming sales. The Beltex Online Shows are even doing their bit for charity, too.

“Entries are free,” Kayley says. “But I’ve set up some JustGiving pages so that people can donate to RABI/RSABI if they want to. Some members asked that their prize-money be donated too, which is great.”

Since going online, showing has never been easier, or more popular.

“I predicted up to 30 entries, so you can imagine my delight when we received over 200 — more than a real breed show,” says Jenna Payne from the Exmoor Pony Society.

This growth in showing has even included international entries: the Supreme Champion at the Exmoor Pony Show was from Sweden — which would have been virtually impossible if it hadn’t been for this new concept of online showing.

British smallholders with speciality livestock breeds are likely to find that they’re welcome in other countries’ shows too — but this isn’t necessarily a completely new concept.

“We’ve had champions from many countries over the years,” says Trevor Perry, a Highland cattle breeder in Australia who has run the Virtual Highland Cattle Show since 2009. “Most notable was a bull from the Balmoral fold belonging to The Queen!”

The first step towards showing online is to pick your show team, as the animals are, after all, what the show is about.

“Obviously there’s only so much that can be gleaned from a photo or video, but a good sheep typically stands out,” says Kayley Kennedy. How much preparation you need to do with your livestock depends on the show regulations: some require full white coat and halter, while others are less formal.