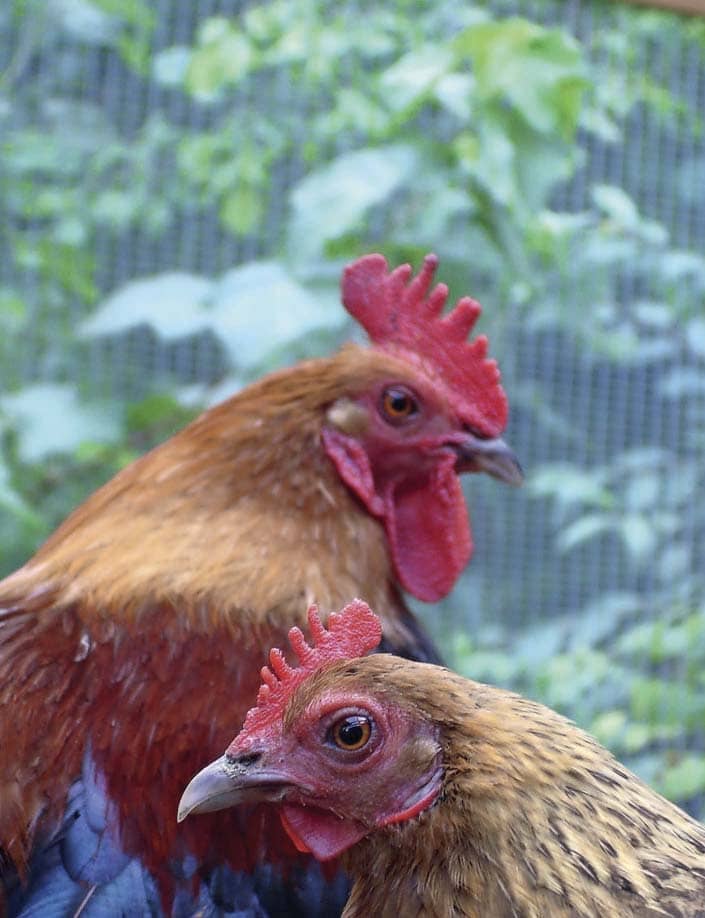 … no, says PhD student Laura Garnham, chickens really do communicate effectively with each other and have a vocabulary of around 24 different calls, a far wider repertoire than most other creatures in the animal kingdom.

Chickens are naturally social animals. The wild ancestor of the chicken, the red junglefowl, lives in flocks of around 2-15 adults, consisting of a dominant male, hens (and their chicks), and, possibly, some lower ranking males. In a human setting, chickens may live in groups of 3-4 when kept as pets, or up to 10,000 when raised on an industrial scale.

Nevertheless, no matter what size the group in which chickens live, communication always plays a key role in their social lives. Even before they hatch, chicks “peep” to each other from inside their eggs. This can help them coordinate their hatching times. For chicks ‘safety in numbers’ is an important motto; the more that hatch together, the safer each will be from predators. Throughout their lives chickens continue to communicate with each other to, among other things, keep their flock together, warn each other of dangers, attract mates and share food. Over the last decades, scientists have been listening in on chicken communication and discovering not only that it is rather complex, but it also shows evidence of some impressive mental abilities.

Most people know at least one sound a chicken can make — “cluck cluck cluck”, “cockadoodle-doo”, “bwaark”, and so on, but did you know that the humble chicken has a vocabulary of around 24 different calls? Few other animals have such a vast vocal repertoire and those that do, for example primates and corvids (members of the crow family), are considered rather intelligent. Not only do chickens use many different calls, but, just like humans, they each have an individually distinct voice allowing them to recognise each other by sound.

SEEING THE WORLD THROUGH THE AUDIENCE’S EYES

Depending on who you are talking with, you probably adjust how you communicate. For instance, you may use more jargon when talking with work colleagues, simplify things when talking with children, or speak in a relaxed and open manner (maybe with a few inside jokes thrown in) with friends. We often switch between different styles of communication without having to think about it. Yet being able to do so requires quite advanced cognition. We need to be able to see the world through the eyes of our audience and accurately predict how they might interpret and respond to what we are saying. In other words, we need to take their perspective which may, of course, differ from our own, so that we can work out the best way to communicate with them.

This isn’t an ability we are born with, but one we develop with age. Young children often can’t understand that another person may not know what they themselves know. It might then come as a bit of a surprise that chickens show numerous examples (discussed below) of being able to distinguish between different audiences, predict how they will respond, and even see, and potentially experience, the world through their eyes.

ALARM CALLING: IS IT WORTH THE RISK?