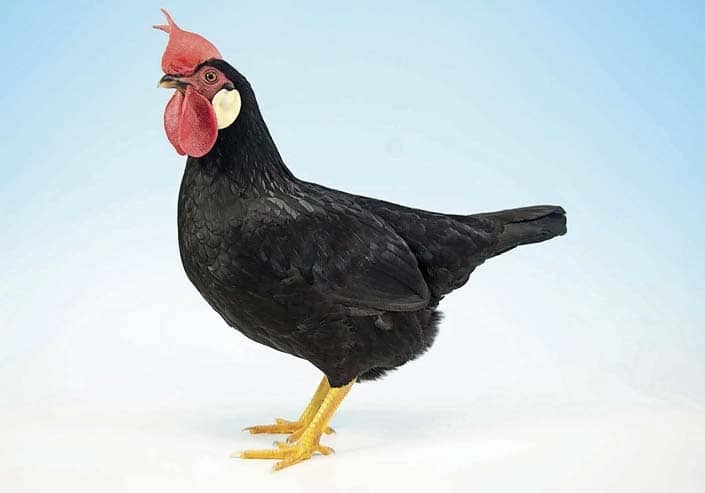 In his series on birds that breed true, Grant Brereton looks at the great number of black varieties available, with a common ancestor probably being the key to their existence.

Considering the numerous poultry breeds available today, there are few that don’t have a black option when it comes to feather plumage colour. The very fact that pure black fowls are possible comes down to a genetic mutation of the original red jungle fowl (what most people refer to as ‘traditionally coloured’). The mutation, officially called ‘extended black’ by geneticists, allows for far more black colour in the body than the traditionally coloured male, with the orange parts of his lower wing already painted black instead of orange. All it would take is some extra paint (genes) to turn the remaining orange feathers black. The mutated male’s corresponding female has even less to do. Instead of being brown and fuzzy in colour for camouflage purposes, she is predominantly black, but with a little orange showing in her neck feathers. So breeding and selection of these genetically ‘extended black’ fowls, whether natural or unnatural, would make it possible to arrive at chickens with an all-over black body plumage.

BACK IN THE PAST

It is difficult to know which fowl were the original blacks, but looking at the historical development of different breeds we can form an educated guess, and begin to appreciate that many black varieties stem from an original ancestor, if not a couple. Even though many poultry writers believe that Cochins were the basis of pure-breed poultry exhibition in the UK, going back to the 1830s and ’40s, it is likely more of a complex story. For example, the Black Cochin in its rudimentary form originated in China, but its ancestor wasn’t imported into the UK until 1872 from the Chinese region of Langshan by a Major Croad. Hence the Croad Langshan.

These fowls were all black in colour and had sparse leg feathering. They were huge in stature and great utility fowl in terms of both egg-laying and meat capabilities. Some UK breeders bred for height and tightness of feather, and later called these fowls modern Langshans. However, few are seen today and they are shown in classes provided by the Rare Poultry Society.

The German Langshan was developed from Croad Langshans as far back as 1895, with the bantams arriving a decade or so later from a breeder called Johann Heermann. They really are interesting to observe with their tall legs and wine glass figures.