What You Don't Know About... Burmillas 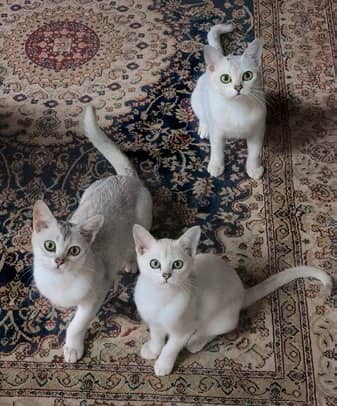 The green-eyed Burmilla is a “composite” cat, a breed created through several cross-breedings and comes in both long and shorthair varieties. These flashy felines wear a sparkling silvered coat, accessorized with facial “makeup” like a beauty queen. “The overall look should be somewhat like a Burmese, but with a sweeter, more open expression. The Burmilla is an irreverent and independent cat that adores its owner and displays many kitten-like characteristics even into adulthood. (CFA Breeds) The unique temperament of the Burmilla combines the demanding and mischievous nature of the Burmese, and the easy-going, laid-back personality of the Chinchilla Persian. The result is a very sociable, playful and affectionate nature that endears these cats to their owners, and to virtually everyone who meets one.

Although most popular in black chinchilla or black shaded, Burmillas are also shown in a large variety of colors and were recently recognized in numerous shades of golden.

These graceful and elegant cats originated in 1981, in the United Kingdom. “Baroness Miranda Von Kirchberg originally purchased a Chinchilla Persian male, Jemari Sanquist, as a pet for her husband. Shortly before having him neutered, he accidentally met up with a precocious lilac Burmese female, Bambino Lilac Fabergé. When a housekeeper inadvertently left Fabergé’s door open, she was able to escape and mated with Sanquist, thus producing the very first litter of Burmillas. The result of this mating produced four female kittens, all shorthair and black shaded silver in color. “The Baroness sought help and advice from many people including GCCF officers, geneticists, and cat club representatives, and eventually formulated a breeding programme to develop ‘Silver Shaded Shorthairs of Burmese type’ which she named Burmillas. Over the course of the next few years, more breeders joined the programme and it became clear that the new breed had huge potential, because in addition to the Shaded Silvers, other patterns and colours were appearing along with semi-longhairs to be known as Tiffanies.” (Johnson)

Today, the breed is recognized in all the major associations. CFA accepted it for registration in 2003. Burmillas were first shown in the Miscellaneous class in 2012 and advanced to Championship status effective May 2014

Kathleen Rutledge, Springfield, Virginia, lives with five Burmillas and a Burmese on a regular basis, but currently has two Burmilla houseguests. The “supplier” for her Burmilla habit is Keith Kimberlin, “who brought the breed to CFA. I find Burmillas in a class by themselves when it comes to sweetness!” One of Kathleen’s houseguests is a nearly five-month-old male who is “cute enough to eat! There is nothing like little babies! This little boy comes flying at me when I go into his room, and he never stops purring!” Kathleen reports, “I can’t read the newspaper anymore without a sleeping Burmilla.”