The Cat That Saved A Pig 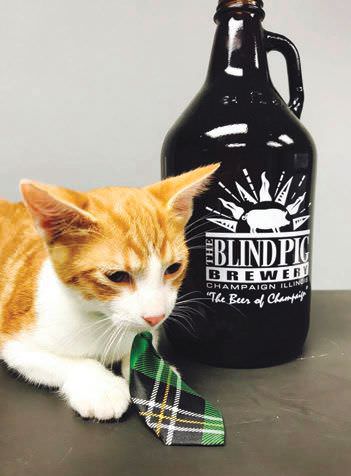 The Cat That Saved A Pig

Cats have worked as the world’s fuzzy rodent exterminators for at least 10,000 years. That’s when wild cats cozied up to the Natufians, hunter-gatherers of the eastern Mediterranean, who were the first humans to store grain. This also made them the first humans to turn to cats for pest control. Agile and nocturnal, cats need little light to hunt. With rodents most active at night, cats became their perfect nemesis. Fast forward to present-day Champaign, Illinois, where the Blind Pig Brewery was losing thousands of dollars of ingredients each year due to mice. Even the tiniest of holes chewed into the 55-pound bags of grain and malt meant that they had to be discarded. Owner and brewmaster Chris Knight was killing three to four mice every week, and decided he needed something more efficient than mouse traps.

Enter Brewster. Jessica Sempek of Hospice Hearts (www.hospicehearts.org), a 501(c)3 organization which specializes in providing care for animals whose elderly owners are no longer able to care for them, had recently helped rescue a colony of 80 abandoned and feral cats. Brewster, a young red and white classic tabby male, was semi-feral. Sempek felt he wouldn’t do well confined in a home environment, but would be perfect for the brewery.