Homecoming - Forever Home For All 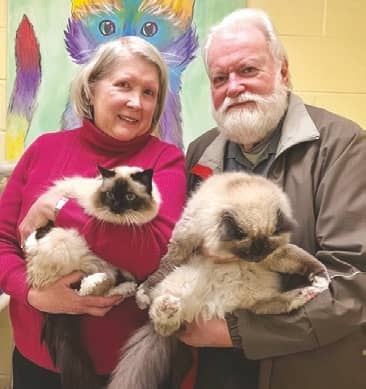 For our felines, homecoming might be finding the perfect forever home, or finding their way back home again. In this issue, we take a look at cats who have done just that—come home, again.
Candilee Jackson

The cat fancy provides a wealth of opportunities and meaningful interactions for many of its participants, but the mobilization of a posse to accomplish a rescue is among the most satisfying memories I have. To say, “it takes a village” to accomplish a rescue is certainly an understatement—everyone and everything is involved including emails, phone calls, Facebook posts, pictures, newspapers, Yahoo-lists - you name it. Communications travel between cities, states and even across the country to make a rescue road-trip happen. While the beginning of the process may be tearful, the ending placement of a lost or homeless baby is both heartwarming and deeply rewarding.

Now that we have social media to help facilitate the connections between those who are willing to help rehome a needy cat, the rescues are happening much more quickly than have been possible in the past. Sometimes, they are also more dramatic, and worthy of special attention.

Such is the case of two surrendered elderly Birmans who came to the Anne Arundel Country Animal Care and Control in Millersville, Maryland. Their story is shared by Diana Coppola, a Birman breeder from Pennsylvania.

“Hundreds of thousands of people read our social media post about Missy and Zipper, two sixteen-year-old Birman cats who were given up to the shelter because their owner was going into a nursing home. But it took only one person, a reader in Oregon, to find them a new home,” Diane recalls.