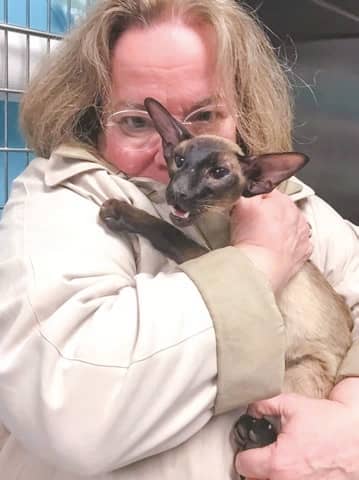 It was every exhibitor's worst nightmare—losing a cat in or from a show hall! Fortuately for both Melissa and Eclipse they were reunited.
Laurie Coughlan

What would you do if your best feline friend was lost in a strange place? Melissa Hayden faced this question when Eclipse, her year-and-a-half-old Siamese seal point neuter, disappeared into the dark from a show at the Maryland State Fairgrounds. It is unclear whether he got out of his cage on his own or was helped out. What is clear is that he had vanished.

Eclipse is a gentle animal who enjoys participating in CFA shows. This show was running late. When the last ring finished, Melissa placed each cat in a carrier on her cart and started out the show hall door, only to remember she had left a room key in the building. Leaving the cart by the car just outside the door, she raced in for the key. Returning to load the car, she picked up Eclipse’s carrier and found it was empty, though the door was still latched. In shock, she mentally reviewed putting him in the carrier, checking the door, and fastening the cover. How could he have escaped and refastened the latch? Heart racing, she secured the other cats and began to search.